“I always start my artworks by looking at the traditions within that genre, whether it be ceramics, tapestry, printing or bells, so I have been looking at bells from different cultures for inspiration.”
— Grayson Perry

Grayson Perry has been at work to make a large bell. It's Factum Foundation's first 'Art-Bell' commission on behalf of The London Bell Foundry, which demonstrates the new business model aimed at reviving the bell making industry. With the help of Nigel Taylor, who worked at the Whitechapel Bell foundry for 40 years, Grayson has created his Covid Bell, a commemorative artwork that will be rung to celebrate the end of the pandemic, the great work of the NHS staff, and that will toll for all those we have lost. 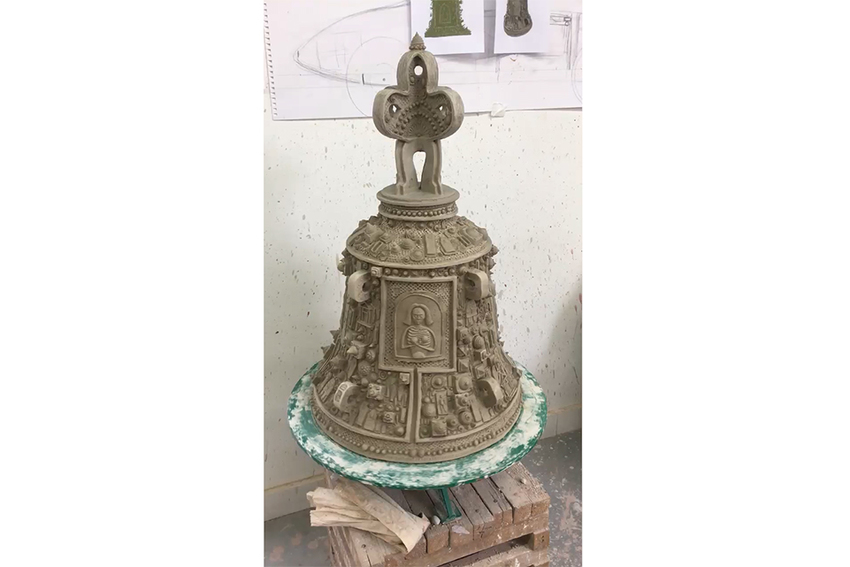 Modelled in clay in Grayson’s studio, it was scanned in 3D by Gabriel Scarpa and will be enlarged, 3D printed, moulded and cast in collaboration with Pangolin Foundry in Gloucestershire. Pangolin has been an active supporter of the campaign to revitalise bell making and merge the traditional skills with new casting technologies. Grayson Perry’s Covid Bell will be the first of many fine art commissions The London Bell Foundry committed to make during the Public Inquiry. The plan for the Covid Bell is to make a tour of the hospitals in England, where the public and the NHS can engage directly with it in a series of moving emotional and cathartic events. This is the role bells have always played throughout history and human memory. Bells have their own voice. It is intended that the Covid Bell will end its journey in front of the Covid research labs in Oxford, saluting the importance of technology and innovation.

The Covid Bell heralds both a new demand for bells and a new financial model. The dependence on church bells, a dwindling market with small profit margins, has been strangling traditional bell making. Factum’s new model of working with the world’s greatest artists to produce bells means they will have a value way above their production cost. The sale of these bells will support traditional bell-making and ensure the continuity of the same artisanal skills that have been practiced continuously in Whitechapel since the casting of the 12th century bells in Westminster Abbey and earlier.

During the casting of Grayson’s bell, we are also making a film about Nigel Taylor, who will demonstrate every stage in the sand and loam method, an act immortalised in the bell-making scene in Tarkovsky’s 1966 film Andrei Rublev.

The Bell Foundry in Whitechapel is a national treasure of epic importance. Grayson Perry’s bell is helping to demonstrate that it has a future if there is a political will.