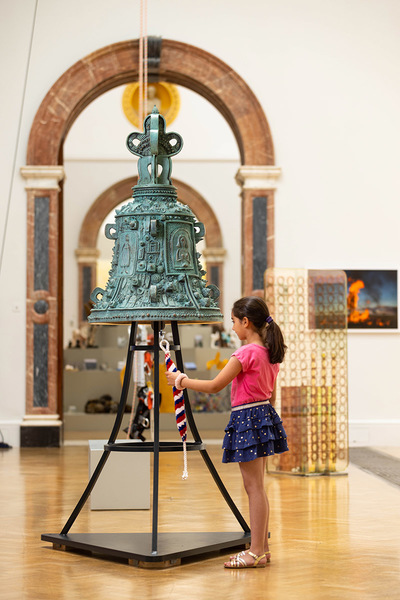 Made during the pandemic, Grayson Perry's elaborately decorated bronze bell marks this unprecedented period whilst celebrating London's great bells and their long history in marking time, mourning death and celebrating life. Members of the public visiting the Summer Exhibition will be invited to ring the Covid Bell.

The Covid Bell was fabricated by Factum Arte in Spain, cast by Pangolin Foundry, Gloucestershire and tuned by Nigel Taylor working with Nicholson Engineering in Dorset. The Covid Bell weighs almost 400kgs and was made by Grayson Perry with the help of Nigel Taylor to support the newly formed London Bell Foundry. Nigel Taylor is a master bell maker who worked at the Whitechapel Bell Foundry for 40 years.

Since the Public Inquiry was held in October 2020, the London Bell Foundry has been formed, the first bell by Grayson Perry has been finished, the second and third commissions are about the be announced and a film about traditional bell casting has been commissioned with Nigel Taylor, the former Tower Bell Manager at the Whitechapel Bell Foundry.

More about the project | Press release 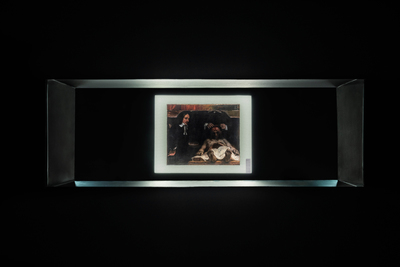 Factum Arte and Factum Foundation worked on two facsimiles of anatomy-themed paintings: Rembrandt's The Anatomy Lesson of Dr. Deijman, from the Amsterdam Museum and Bosch's The Extraction of the Stone of Madness from the Museo del Prado.

'Human Brains: It Begins with an Idea' (23 April - 27 November, 2022) brings together documents, drawings, paintings, prints and books challenged by the words of fiction writers and a collection of interviews with neuroscientists, psychologists, neurolinguists and philosophers from all over the world. 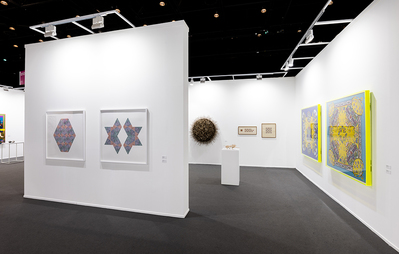 An Awake Heart is a set of intricate, hand-woven textiles woven by Farah Behbehani. It was the subject of a new collaboration between the Kuwait-born artist, Athr Gallery and Factum Arte. The new production on display at Art Dubai 2022 (March 11-13, 2022) was the result of an innovative project aimed at mediating the shape and colour of textiles into an elevated-printed medium, and potentially into other productions.

The surface detail of the original silk and silver thread embroidered triangles was digitised, aiming at retaining the reflectivity and handmade nature of the original objects. 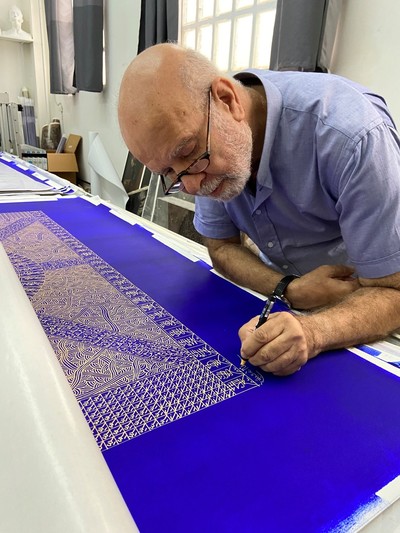 'Koraïchi plays with the number seven throughout the exhibition both theoretically and literally. The artworks appear in multiples of seven; there are fourteen canvases, fourteen steel sculptures, and a group of six alabaster tablets lining the path to a monumental tapestry.
It is a divine number and omnipresent.'
- Aicon Gallery

For his third solo exhibition in the U.S. (February 3 - March 12, 2022), Rachid Koraïchi's long-standing collaboration with Factum Arte saw the production of new bodies of work, linked both to his Jardin d'Afrique and his exploration of calligraphy. Next to the large Jardin d'Afrique tapestry and the complete series of Les Vigilants (seven calligraphic sculptures in black painted Corten steel) created in 2021, two new series are also on display.

The six panels of Le Chant de l'Ardent Désir are the largest artworks by Koraïchi made in alabaster to date and La Montagne aux Étoiles is the result of the artist and Factum Arte's exploration of the balance between technology and traditional calligraphy.

More on the process behind the new series 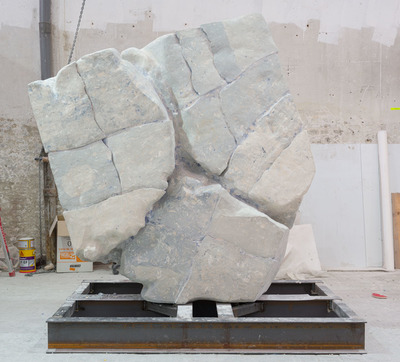 The concept of ceramic as the art of mixing and making of different and diverse minerals, to create something new but still deeply rooted in its basic elements, is at the centre of the public art installation Geology Rebuilt, created in collaboration with Factum Arte. Installed just above Tottenham Court station in London on January 28, 2022, Geology Rebuilt aims to bring something "brutal and geological" to the city, showing a new way of rebuilding geology from ceramics. The contrast between the traditional brick wall behind the contemporary sculpture shows how different the end results of the same materials can be.

The production process followed several steps, which were coordinated by Factum's engineering team.

More on the process 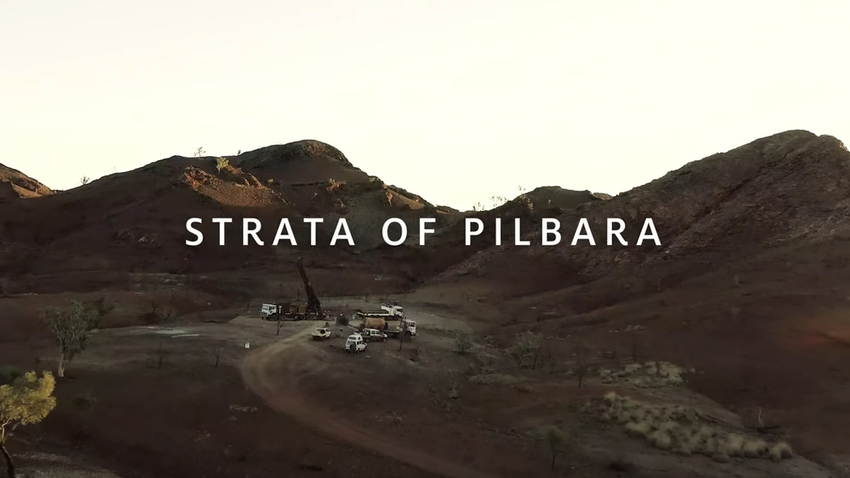 Bernd Nicolaissen's new production is centered on the Australian Pilbara crater, an area that covers the Earth’s oldest rock formations and was irreversibly damaged in 2020. This video describes the experimental process that happened within Factum Arte between 2019 and 2021, involving elevated printing technology by Canon Production Printing. Factum experimented with gelatine inkjet printing over six glass plates, each one adding depth and colour in "building" the final result layer after layer. Encased within an illuminated aluminum box, the Stratagram is a three-dimensional visualisation of the work of geological eras.
More on the project
A film by Cédric Marville 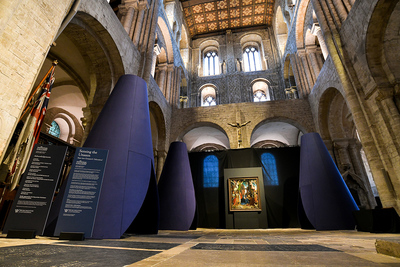 Facsimile of Jan Gossaert's The Adoration of the Kings

The Adoration of the Kings painted between about 1510 and 1515 by Jan Gossaert (also known as Jean Gossart) within the collection of the National Gallery in London was recently the subject of an in-depth study. Accurate recordings revealed the complexity behind this large (179.8 × 163.2 cm) 16th-century altarpiece, depicting the Three Wise Kings (Balthasar, Caspar and Melchior) visiting the newborn Christ.

After recording the painting in high resolution using their Lucida 3D Scanner and colour photography, the National Gallery requested Factum Arte to produce a perfect facsimile to be displayed within the exhibition 'Sensing the Unseen: Step into Gossaert’s ‘Adoration’ inside the Winchester Cathedral (January 22 - April 3, 2022).

More on the process behind the facsimile 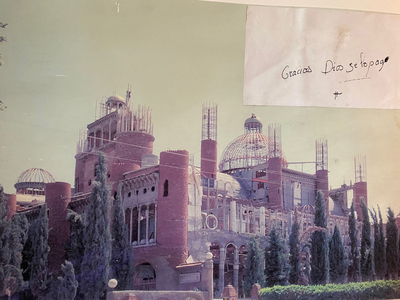 It is with great sadness that we learnt of the death of Justo Gallego. He has been an inspiration for everyone at Factum since Manuel Franquelo and I first met him in 1996. We arranged a celebration of his great work in London in 1998… Justo sent me a message saying ‘Dios se lo pague’.
He was a great man with a deep vision. I am sure he is where he would like to be. His humour, intelligence and belief are an inspiration to me and to so many others. I am sad but I am happy for you!

Watch this film by Otto Lowe about Justo and his work by clicking here. In agreement with Zumrud Suleymanova, former Minister of Culture in Dagestan, Factum rematerialised and donated two of the tombstones recorded in Dagestan (Russia) in 2016 to Rachid Koraïchi for his Jardin d’Afrique.

The non-denominational cemetery, garden and DNA database was opened by the artist in Zarzis, Tunisia in June 2021, in the presence of UNESCO’s Director General Audrey Azouley. Jardin d’Afrique was built as a resting place for the countless migrants drowned while crossing the Mediterranean Sea.

The Dagestani tombstones from Kala-Khoreysh, linking back to the artist’s ancestors, were rematerialised in limestone, with sandblasted inscriptions in French, English and Arabic. The steles are now installed at the entrance leading to the tiled pathways.