AL-IDRISI AND ROGER II: MAPPING THE WORLD IN THE TWELFTH CENTURY

A descendent of the prophet Mohammed via the powerful Shi’a Idrisid dynasty, Abū ʿabd Allāh Muḥammad Ibn Muḥammad Ibn ʿabd Allāh Ibn Idrīs Al-ḥammūdī Al-ḥasanī Al-idrīsī was probably born in Ceuta in 1100. As a young man al-Idrīsī attended the famous university in Cordoba, and over the course of his life he travelled widely around a Mediterranean divided between several competing Christian and Muslim powers, arriving in around 1138 at the Sicilian court of the Norman king Roger II. The Normans had conquered the Arab Emirate of Sicily in the final decades of the 11th century, and Roger ruled over a linguistically and culturally diverse population: Arab artesans were commissioned to produce art and architecture for the court at Palermo, and many Arab bureaucratic structures remained in place. 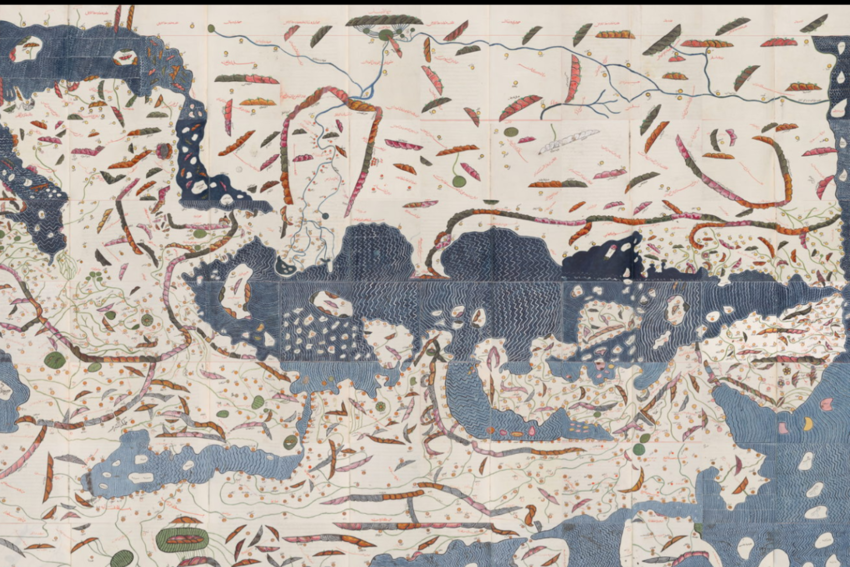 Al-Idrisi's Mediterranean and Arabian Gulf, reconstructed by Factum Foundation from the 70 maps in the Book of Roger. Africa is at the top of the map and Europe at the bottom © Factum Foundation 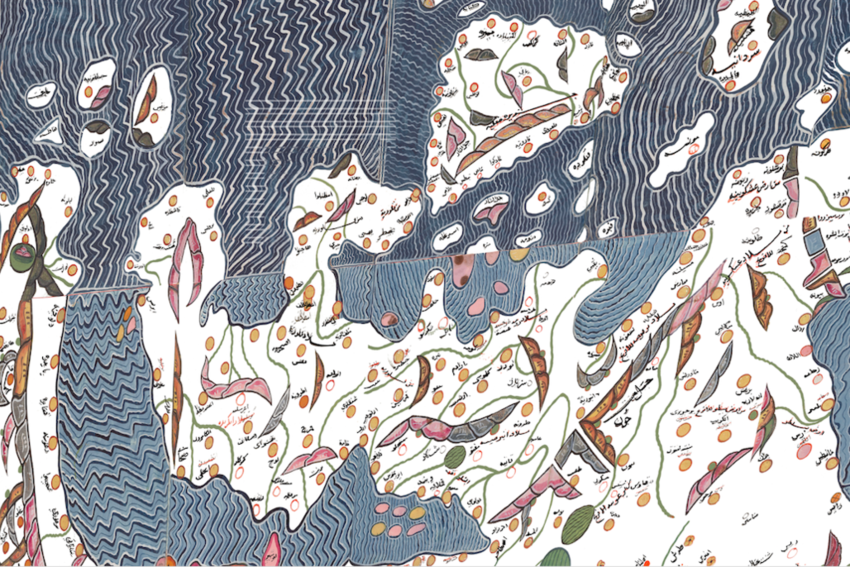 It was with Roger as patron that al-Idrīsī started work, together with a team of collaborators, on the definitive world map of the age. In order to ensure its accuracy, 15 years were spent examining existing maps and interviewing travellers, and al-Idrīsī drew on three centuries of Islamic mapmaking knowledge unknown to western cartographers. Like the 1st century BCE Greek geographer Ptolemy, whose work was known to him in Arabic translation, he divided the world into seven longitudinal climate zones, and he calculated that it had a circumference of 23,000 miles – not far removed from the actual circumference of 24,901 miles. The spherical earth, he wrote, hangs ‘stable in space like the yoke of an egg’. His map inverts our conventional ordering of north and south, placing south at the top of the image, and following the 10th century geographer Ibn Ḥawqal he locates Mecca at the centre of the world.

'[Roger] wished that he should accurately know the details of his land and master them with a definite knowledge, and that he should know the boundaries and routes both by land or sea and in what climate they were and what distinguished them as to seas and gulfs [what was the shape of the coastline] together with a knowledge of other lands and regions in all seven climates whenever the various learned sources agreed upon them and as was established in surviving notebooks or by various authors, showing what each climate con- tained of a specific country.' - al-Idrīsī, Opus geographicum, fasc. 1, p. 5 (note 5).

Once the silver map was complete, al-Idrīsī set to work on a book of 70 regional maps, ‘explaining how the form [of the silver disk] was arrived at, adding whatever they had missed as to the conditions of the lands and the countries’. This book was titled the Nuzhat al-mushtāq fi'khtirāq al-āfāq, or the Entertainment for those wanting to discover the world, although it is often known as the Tabula Rogeriana or Book of Roger; it was completed in AH 548/1153 CE. Each map was accompanied by a description, which related ‘all the wonderful things relating to each [country] and where they were with regard to the seven climates and also a description of the peoples and their customs, appearance, clothes and language.’ This book presents a remarkably rational and un-territorial vision of the world; unlike most maps made in the centuries which followed, al-Idrisi’s maps omit boundary lines between Christian and Muslim dominions, seeking to offer an objective geography of landmass and of human settlement. The text is also for the most part honest in its recognition of the limits of the cartographically possible, although at times it presents an unfamiliar geography: in addition to the River Nile we know, for example, flowing north through East Africa and Egypt, Al-Idrisi shows a second, equal stream which separates from the first near the source, and which flows west across the African continent towards what is now the Atlantic.

Following Roger’s death in 1154, al-Idrīsī left Sicily for North Africa, and in the centuries which followed, mapmakers would reject this scientific vision of the world for one increasingly governed by theological imperatives. The silver map and all original copies of the book are now lost, known only from ten later copies of the Entertainment.

Quotes from the Entertainment for those wanting to discover the world

'When he (Roger) went through the books; he did not find much useful information for the intended research, so he called for all the known scholars in this area of knowledge but he did not find that their knowledge was any better than that in the books. So he set out by getting all known travelers to ask for their knowledge. He asked them alone and in groups, retaining what they agreed upon and discarding the discrepancies. He continued with this research for 15 years, always freeing his time to pursue and look into this art and research the truth within it. He checked all the measurements himself when the map was drafted, comparing the map with the book.'

On the Atlantic Ocean: 'The Commander of the Muslims Ali ibn Yusuf ibn Tashfin sent his admiral Ahmad ibn Umar, better known under the name of Raqsh al-Auzz, to attack a certain island in the Atlantic, but he died before doing that. [...] Beyond this ocean of fogs it is not known what exists there. Nobody has the sure knowledge of it, because it is very difficult to traverse it. Its atmosphere is foggy, its waves are very strong, its dangers are perilous, its beasts are terrible, and its winds are full of tempests. There are many islands, some of which are inhabited, others are submerged. No navigator traverses them but bypasses them remaining near their coast. [...] And it was from the town of Lisbon that the adventurers set out known under the name of Mughamarin [Adventurers], penetrated the ocean of fogs and wanted to know what it contained and where it ended. [...] After sailing for twelve more days they perceived an island that seemed to be inhabited, and there were cultivated fields. They sailed that way to see what it contained. But soon barques encircled them and made them prisoners, and transported them to a miserable hamlet situated on the coast. There they landed. The navigators saw there people with red skin; there was not much hair on their body, the hair of their head was straight, and they were of high stature. Their women were of an extraordinary beauty.'

The Mountain of the Moon, where al-Idrisi's Nile divides in two, with one distributary continuing to the Nile Delta on the Mediterranean and the other flowing west across the African continent and debouching into the Atlantic Ocean © Factum Foundation

On Ireland and Scotland: 'The first section of the seventh climate is altogether Ocean, and islands which are desert and uninhabited. The largest of its islands is that of Ireland, which has been mentioned before. This large island, of which the topmost point is three and a half days’ sailing from the land of Brittany, while its lower extremity is two days sailing from the deserted peninsula of Scotia. The author of “the Book of Marvels” states that in it are three towns which used to be inhabited, and ships used to put in there and visit there, buying from the inhabitants amber and coloured stones: but one of them sought to make himself ruler over the rest, and waged war on them with his folk. And they fought in defence against him; thus enmity arose among them and they fought each other to extinction; some of them migrated to the opposite shore of the continent, and not a single inhabitant was left in the towns.'

Back to the main page