Transforming bottle tops into metallic tapestries, Anatsui noticed he was also inadvertently creating remarkable textural reliefs on the table tops of his studio. The carved tables and weaved metal come into being simultaneously: folding, pounding and stabbing the aluminium, scars, pits and scores the wood. Each mark is an index of effort. Realising the conceptual beauty of these pieces Anatsui selected 14 of them and sent them to be recorded at Factum Arte. The 3D profile of each table was captured by the Lucida 3D Scanner, a laser scanner that takes high-resolution recordings of relief surface. This information was then cut into 2.5mm sheets of aluminium using CNC milling machines, an innovative method for producing a matrix from which to take prints. 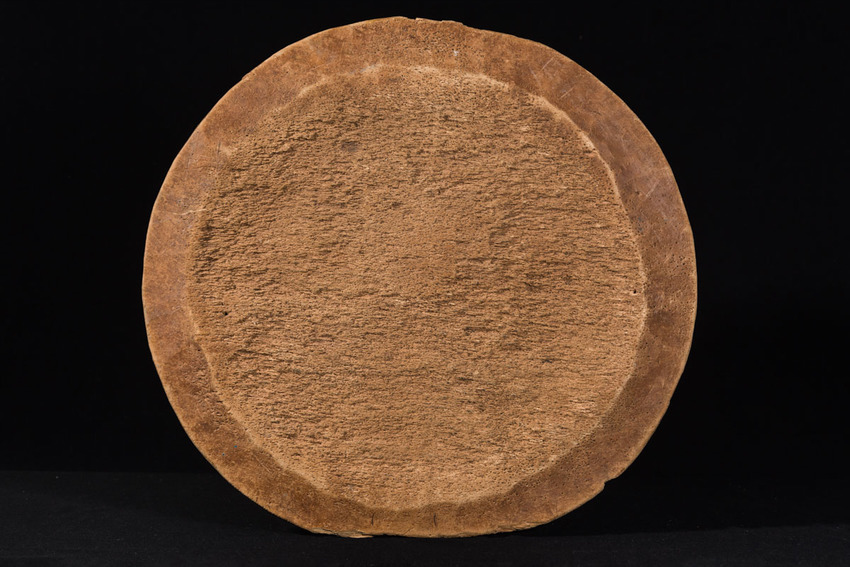 Workbenches used by Anatsui during his ´sewing´ process 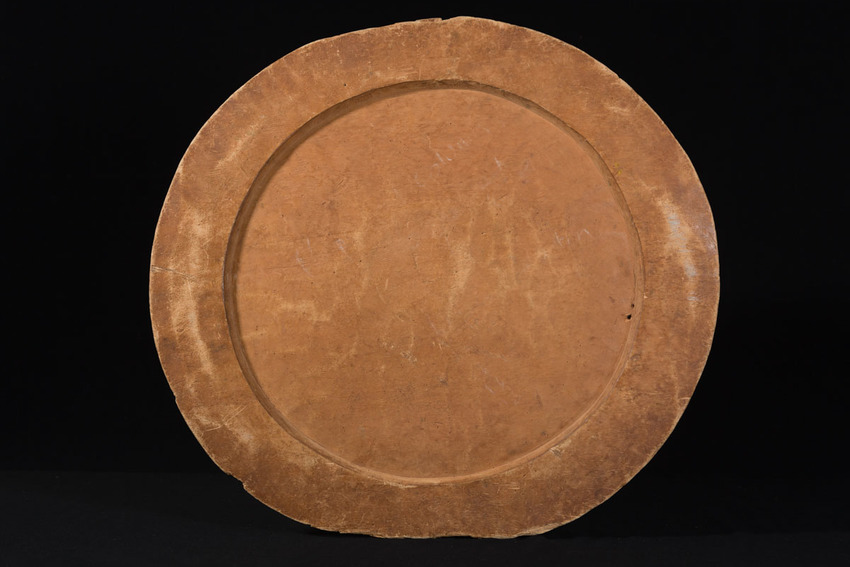 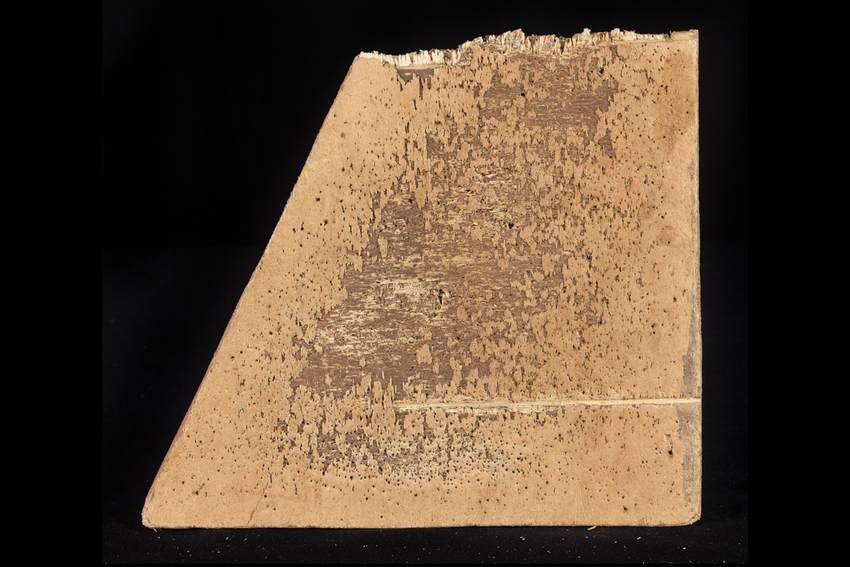 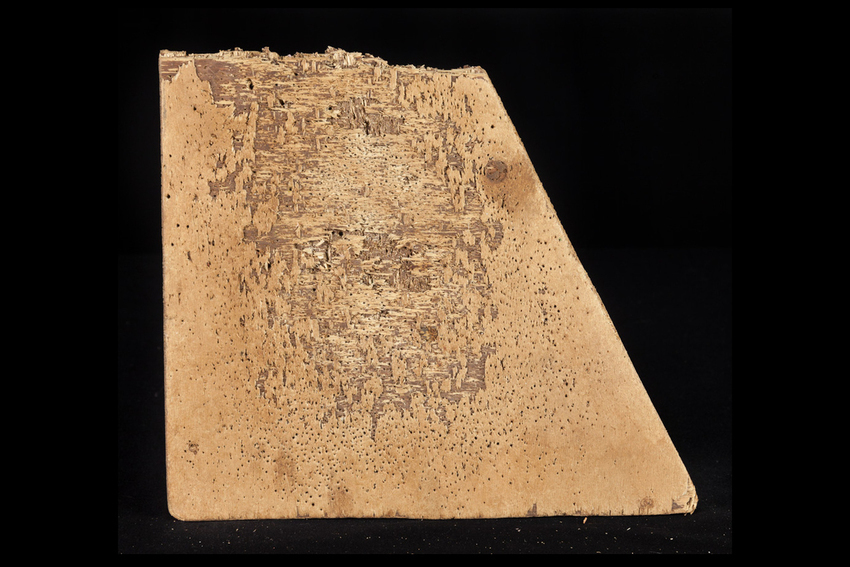 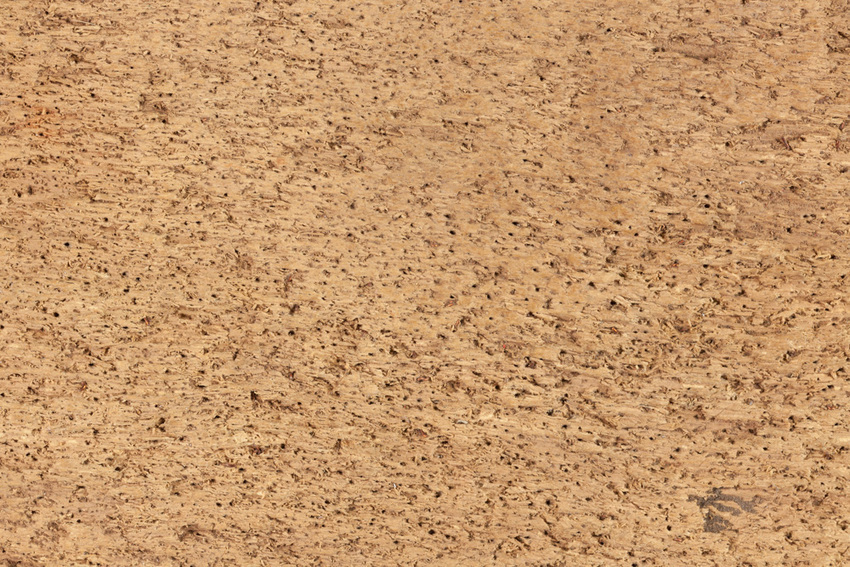 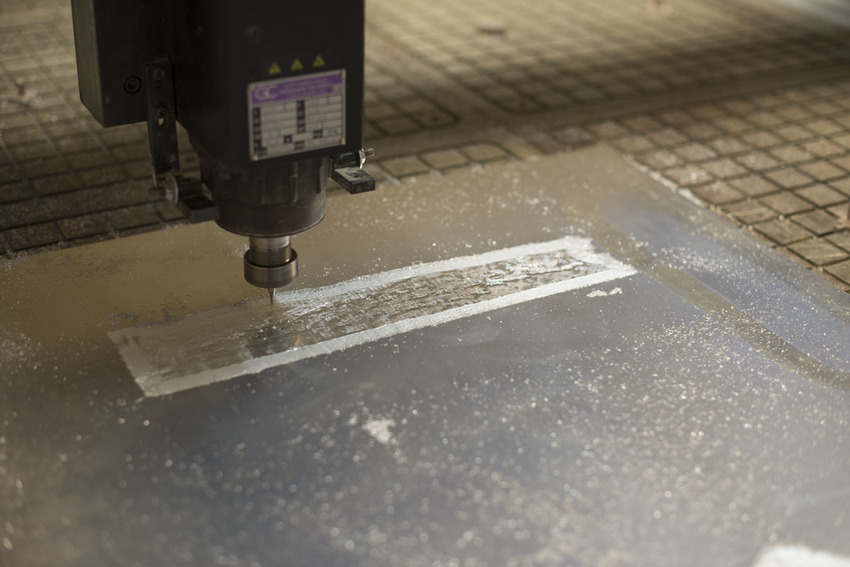 Initially, black ink was used to print and assess the textural information held both by the intaglio (below the surface) and upon the surface. The depth of the plates´ routing offered further debossed information. Plates were also worked upon using intaglio colour ink with a second colour rolled over the plate and in some cases, the process was repeated using a third colour in the form of Chine-Collé laminate.

With the exception the large Takuhon print (a printing method which involves dabbing coloured ink by hand with a pad onto dampened Japanese paper which is overlaying the textured surface), all the works are printed on Somerset Satin 300gsm paper using oil-based etching ink, including a set of large and medium-sized cassava grater works, printed by hand. 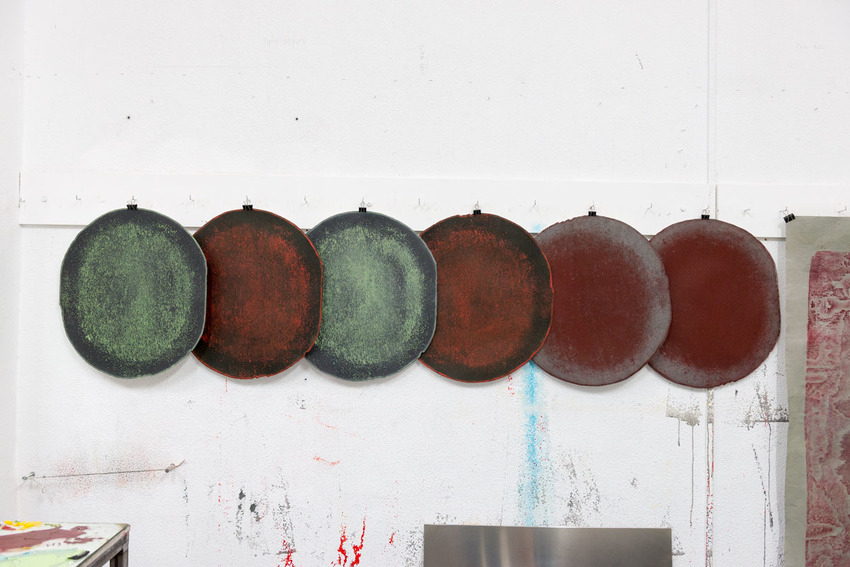 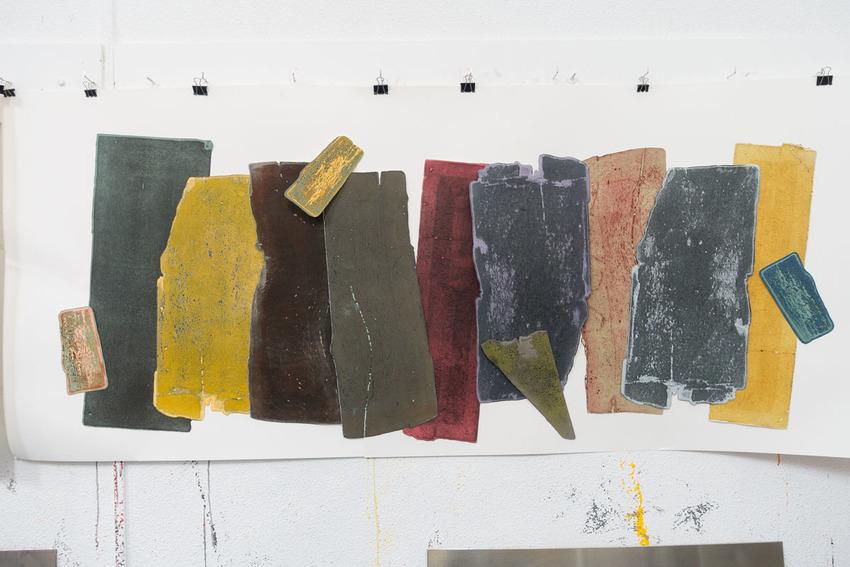 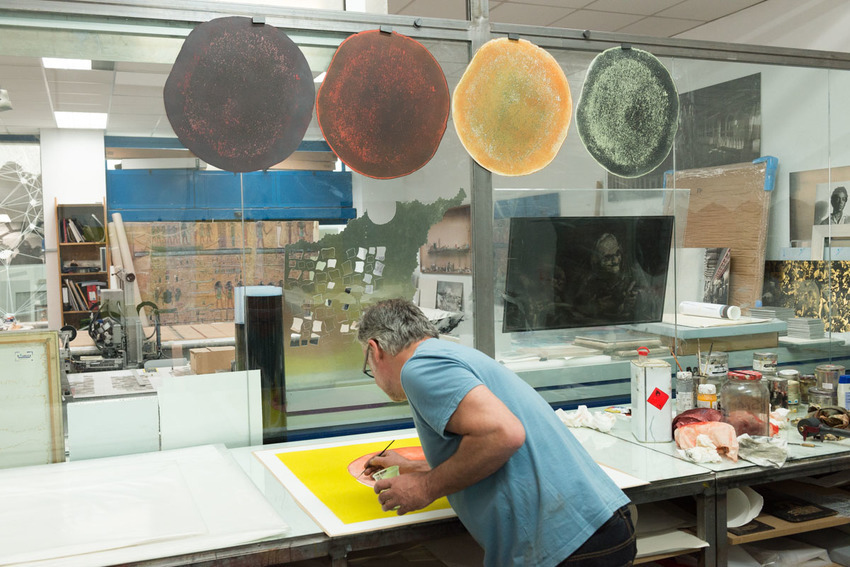 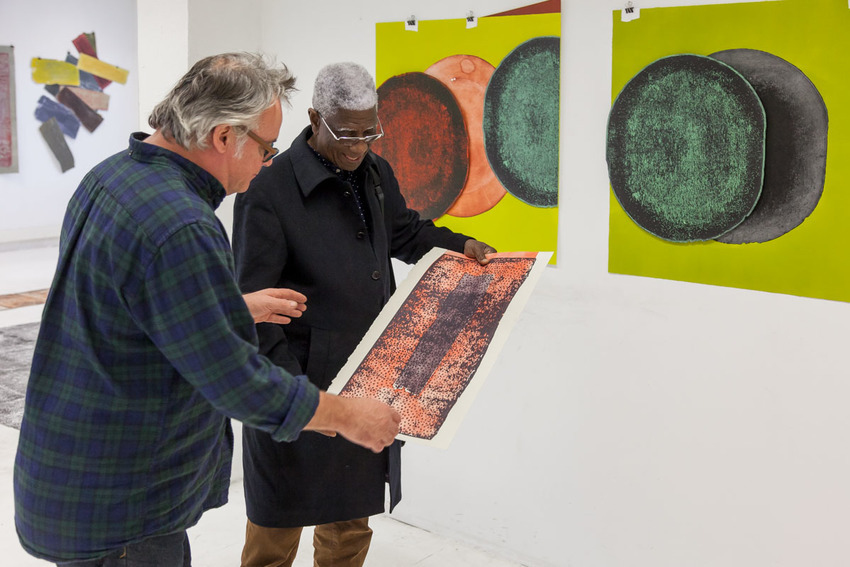 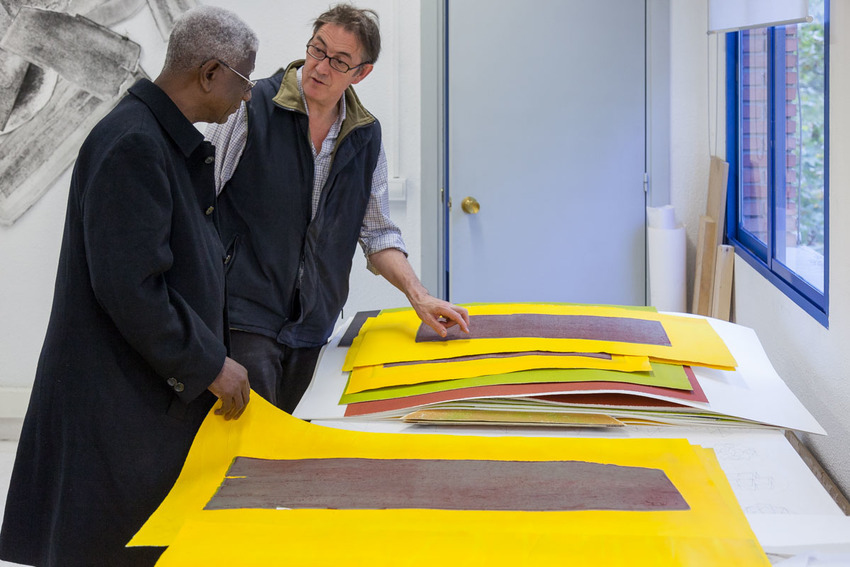 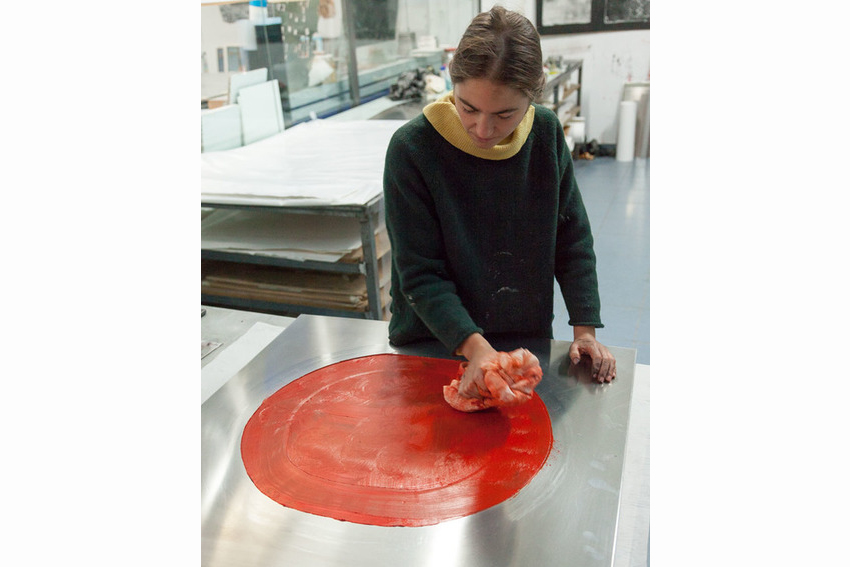 Constanza Dessain, cleaning the metal plate in preparation for a new print

There are 2 sets of 28 images, made from 14 different table tops each with a front and a back. One set is surface relief printed while the other is intaglio printed. 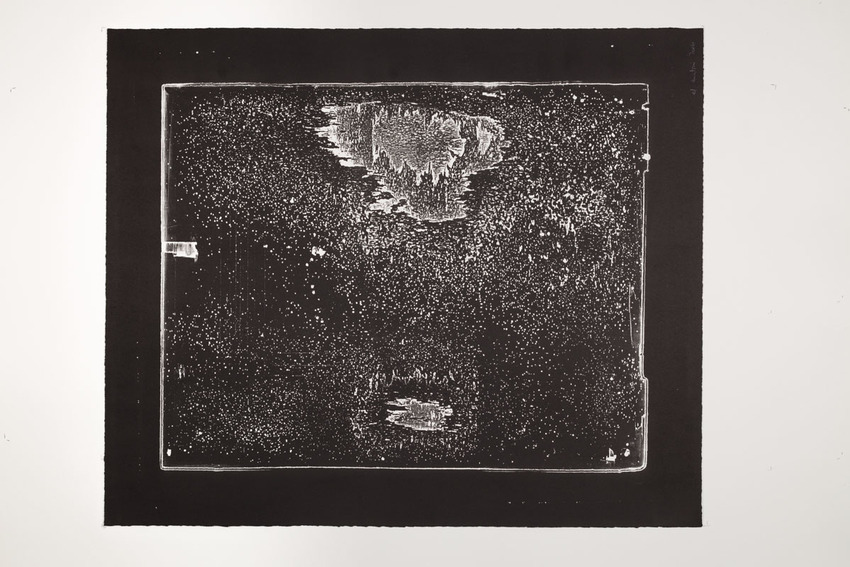 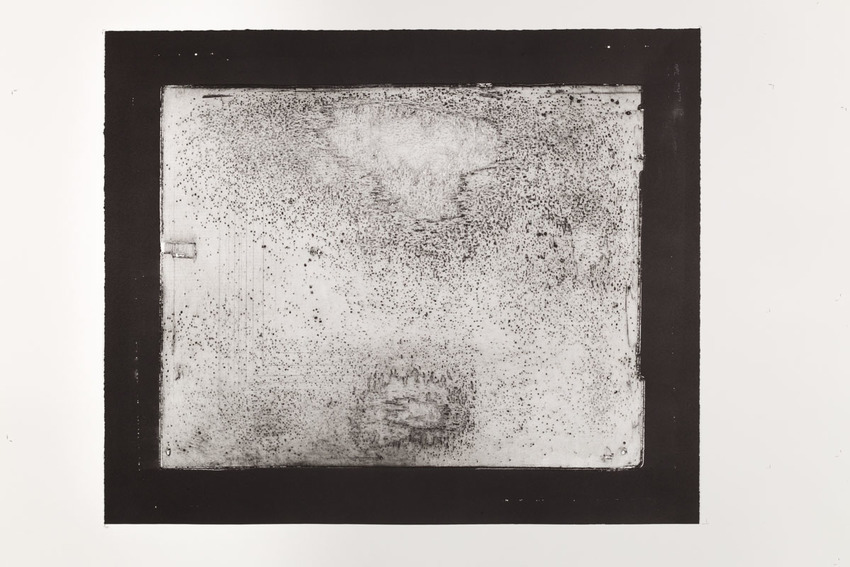 In the print studio these plates were printed as though they were etchings: returning the digital data to a surface with rich tactile qualities. The relief is embossed into the paper giving it the pitted, rough surface of the tabletops. The ink has been applied both through the intaglio and the relief method, each revealing different information in the plate. In both versions the original actions of making become encoded in a black and white visual language. The prints are visual expressions of Anatsui’s working process, revealing the vast effort required in his sculptural practice. Examining the marks one can imagine the process of sculpting and the position of the body in relation to the table, with the most comfortable positions producing the areas of the most acute scarring. Like the foot of an icon worn smooth with touch, these tabletops are manifestations of dedication through time.

As an alchemist of the discarded and of excess, it was fascinating to see Anatsui work in the realm of print. Conventional distinctions between proof and editions fell by the way: everything was material. The inherent generosity of print, and its capacity for multiples and variations, was embraced for the visual possibilities of repetition and reversal.

Everything Anatsui touches is transformed by meticulous care combined with a reckless abandon. At moments he literally threw prints over his shoulder allowing them to land one on top of another. These chance arrangements would be ponderously and silently examined. Minute adjustments might activate them or they would be returned to the stockpile. The result is a collage that is simultaneously a monument to the cumulative action that has sculpted the table tops of Anatsui’s studio, to the precision and dedication involved in making his metallic nets, and a celebration of the haphazard and the beauty of the makeshift. Eclipse printsInk on Somerset paper, some with chine collé handpainted paper and foil
98.5 x 98.5 cm
Edition of 3
1 of a series of 13

Anatsui has taken the traditional format of a print within a white border and transformed its communicative capacity. The format of the square within the square allows the print to literally push against, and spill over, its internal limits: these are parameters for play, not for restriction. Working across the floor Anatsui would push the disks around and then stand over them, meditating on the what the colours and forms did to one another. No orientations were prescribed and the compositions would be looked at from all sides.

Anatsui’s talent for graphic impact is apparent standing back from the series. Standing close one is lost, and wants to be lost, in surface. The disks are printed over hand painted papers and foils, and both as an intaglio and relief plates. Through these approaches a shifting landscape of marks moves across the forms, some lying on the paper and others embedded in it, some appearing glossy on a matt dry surface while others are the stable points on a shimmering foil. The result is luminous. Anatsui takes a circular disk and pushes it to its poetic limit: the thirteen cycles of the moon are summoned by the repetition of one wooden tabletop. 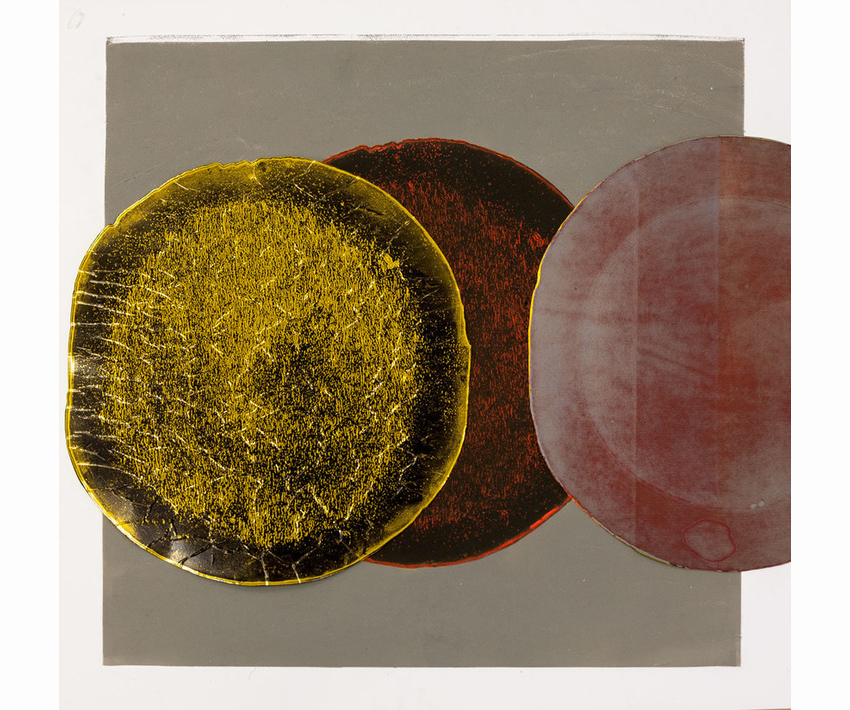 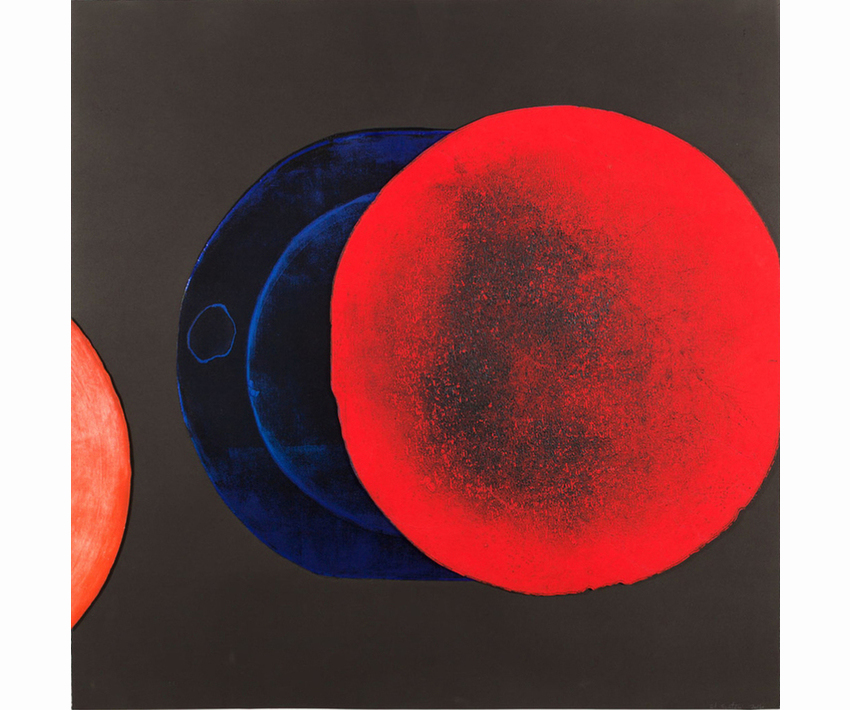 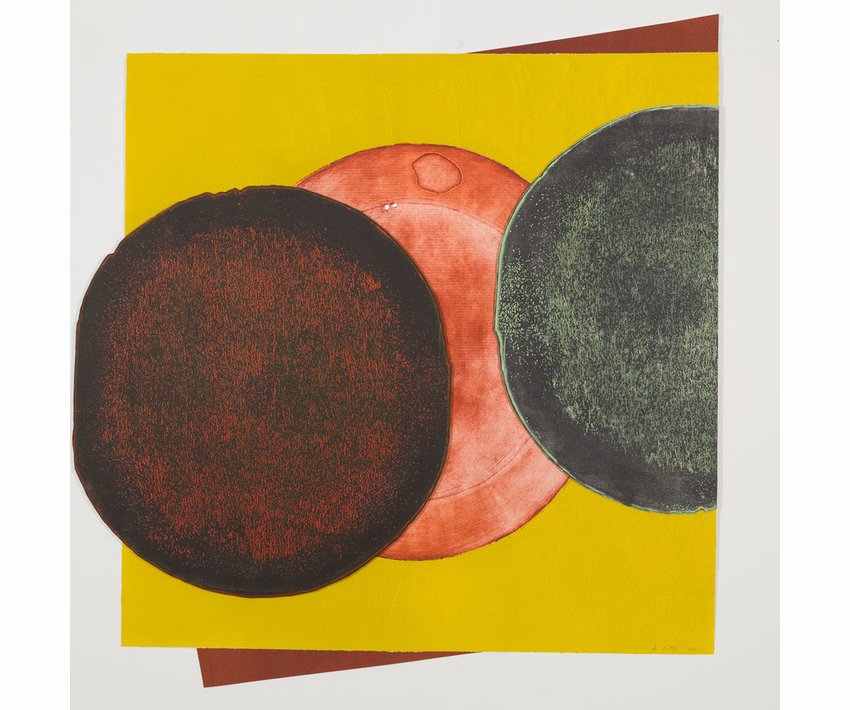 Takuhon was developed in ancient Japan to take impressions from the stone carvings in shrines, and requires only a simple tool made from silk and cotton. With this ‘tampo’ dampened paper is pounded into the typography of a surface. As the paper dries, the ink is applied with the same movement, in a rhythm of taps. Anatsui was delighted by the action of tup-tup-tup involved in the method: one that in some sense echoes the labour of his studio. The method could be a gestural reenactment of the cacophony of pounding and pressing hands that simultaneously bring the metal pieces, and the densely scored table tops, into being.

The narrative of touch is apparent too in a more literal sense. The print is a trace of the primary contact between the metal tools and the table top, that was followed by the direct contact between the table and the paper. The flexible Gasenshi fibres became like a skin that followed the grooves of the wood. As it dried the paper retained the relief while picking up fragments of the table; the dust, wire and splinters of Anatsui’s studio in Lagos. 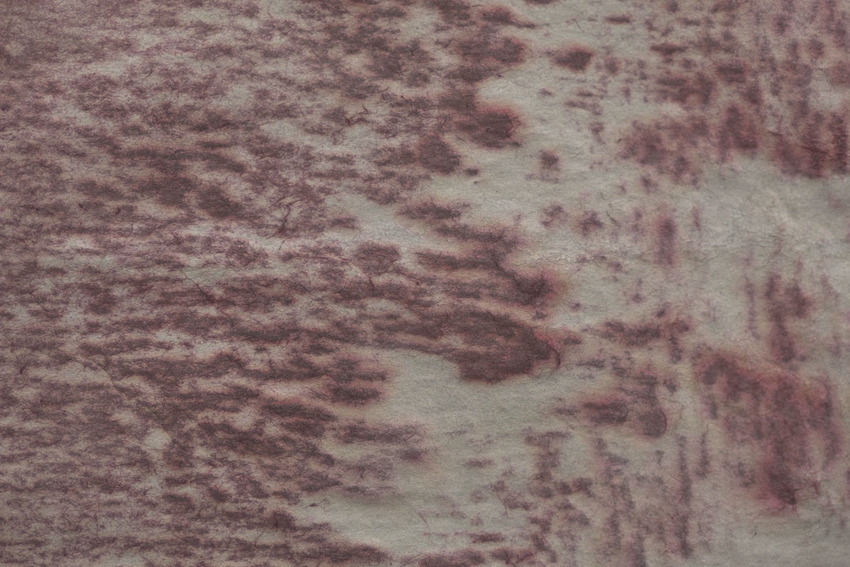 Printing directly from fragments of his aluminium sculptures Anatsui has explored the mimetic possibilities of intaglio print. The presence of the plates in the print is disarming: the intaglio sections have a photographic quality that is given body by the 1:1 scale of the emboss. Smaller areas are inked with a roller and are more graphic, returning the eye to the surface and its printed nature. There is a fluctuating sense of presence and absence across the image, but Anatsui playfully interrupts the power of the trompe l’oeil by including a fragment of the real, a small section of the metal net.

Anatsui sculpted sections of the different metallic weaves to accentuate their particular character and geometric qualities. Each type was treated differently: some he opened up through cutting and dissembling, while with others he created a sense of density though threading and folded them onto themselves before they were run through the rollers of the press. Once inked Anatsui would literally drop the metallic piece across the bed of the press, and then lay the paper over it at an angle so the edges of the paper cut across the sculpture. This animates the print with a sense of looking at a fragment of a greater whole, one that will not be contained in the formality of a centred composition. The net dances across and off the page, and over the series one’s eye becomes attuned to the different rhythm each weave establishes. Anatsui provides us with a portrait of the bare structure of these clothes without the shininess of metal and its reflections: we become attuned to the idiosyncrasies of the way they are joined, the subtleties in their fixedness and the spaces between the cells. 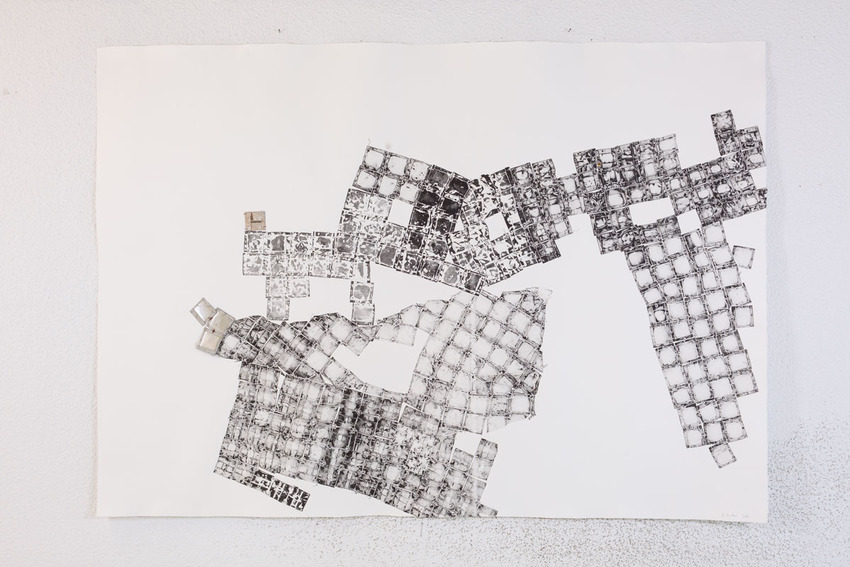 Punched by hand, and printed by hand, these cassava graters give an impression of endless variation and particularity within their sameness. It is a similar quality to the one that we recognise in the repeated elements of Anatsui’s sculptural cloths. Each component piece is a permutation of an idea that manifests its own particularities. Printed on thick Somerset paper and mounted onto flexible aluminium the collage also has the paradoxical quality of feeling both robust and fragile. The sections hang from one another with copper wire, giving each part slight movement and tilt, and its modular format holds the potential for an infinite number of reorderings.

Anatsui’s positioning of a singularly different print in the cellular structure creates an image within an image. While the cassava graters were printed by the roll-up method, and push forward as bold surface, the intaglio print creates a space that recedes. This window is not a view to a complete world, rather one looks through to a metallic off-cut printed over a table top, rich signifiers in an archaeology of Anatsui’s practice and the surfaces of his world. 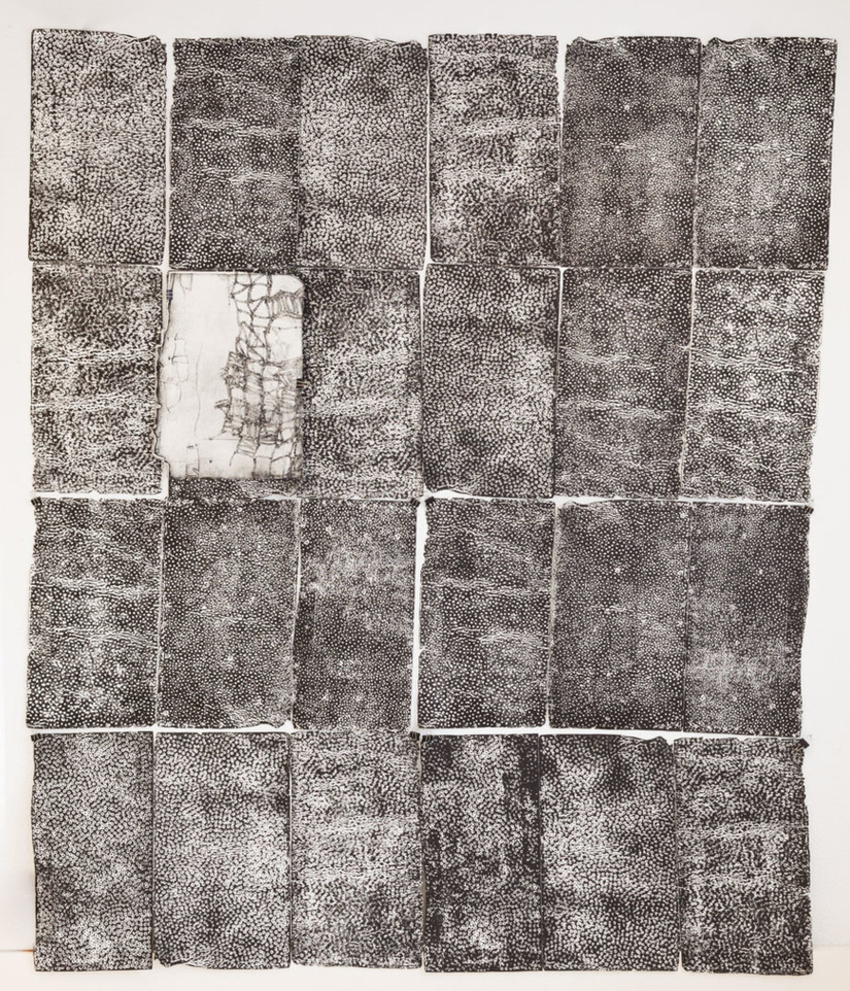