Boris Savelev is one of the most important and well-known photographers working in Russia today. He first came to the attention of the art-world in the west with the publication of Secret City by Thames and Hudson in 1981. This established Boris Savelevs´s reputation as one of the most serious artists of a new generation of photographers emerging from the former USSR.

Savelev’s extraordinary photographic work has earned him a place in major international collections worldwide, among them, the Corcoran Galley in Washington, the Museum of Modern Art (MoMA), the Staatsgallerie of Stuttgart, the Saarland Museum in Saarbrucken, Germany, the Museum of Fine Arts in Santa Fe and many other major institutions.

In 1986, at the start of Perestroyka (rebuilding), Thomas Neurath, the director of Thames and Hudson visited Moscow looking for 'unofficial' artists. He selected Boris Savelev and in 1988 the monograph Secret City was published. This was the first book published in the west of an unofficial photographer living in the Soviet Union. Up until 1988 all of the works that Boris Savelev had exhibited were black and white prints but he had been experimenting with colour photography since the early 1980's. When producing Secret City , Thames and Hudson selected a group of these colour photographs which had been taken using Orwachrome film. The poor quality of the colour, and the additional problems of the lithographic reproduction failed to capture the complexity and density that the artist wanted. In 1987 he discovered Kodachrome film and all his colour work taken on film since that time has used Kodachrome. In the years following its publication most of Boris Savelev's work has been an enquiry into colour photography. Since 1995 most of his images have been captured digitally.

After the initial disappointment with the reproductions in Secret City Boris started to look for alternative printing processes. He worked with C Type prints, but anxious about their fugitive nature and unhappy with the uniform surface of the paper he started looking into dye transfer prints and then pigment transfer prints. He experimented with many of the nineteenth century processes becoming a master of gum bichromate printing (both in black and white and colour), platinum printing and Kallitype. Cameraworks was his inspiration and pictorialist photographers like Steichen, Kertész, Lartigue and Demarchy interested him, both for the quality of the prints and for the integrity of the images.

In 1995 he was invited to Germany by Alexander Von Berswordt Walrabe to show with M Bochum. Alexander decided to produce an edition of 15 of Boris's images and was persuaded to make them as pigment transfer prints. The process is time consuming and difficult but with the right materials it is capable of producing beautiful images of great complexity and with a slight surface relief. Permaprint was the only studio in Europe capable or realising this edition and once a visa was obtained Boris was sent to London. This was the start of a long relationship between Boris and myself in search of the perfect way to manifest his images. Permaprint morphed into Factum Arte and moved to Madrid. Factum Arte developed the interest in surface and started building and acquiring 3D scanners. Digital printers were bought and taken to bits. It became clear that we had to develop a flatbed printer. This has now been perfected. New surfaces were investigated using materials usually associated with painting. These were subjected to rigorous testing and analysis, modified and tested again. Boris began to prepare his files to be printed in layers, a task that requires a very different sensibility from normal photographic printing. 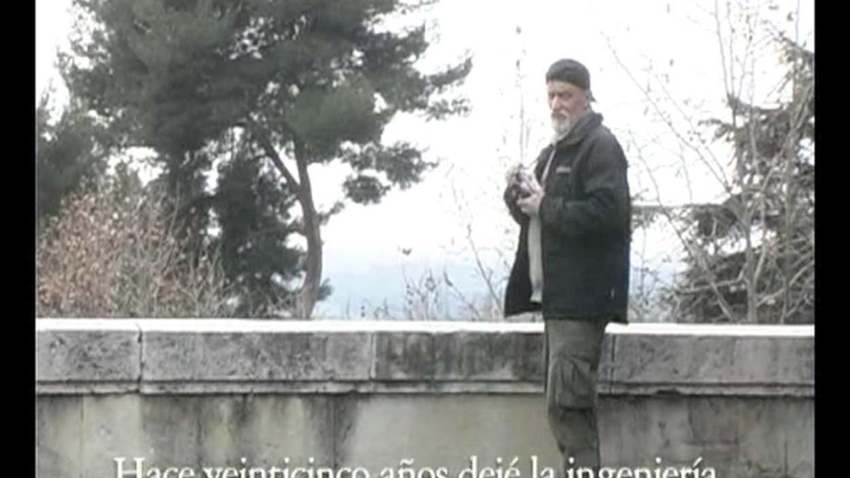 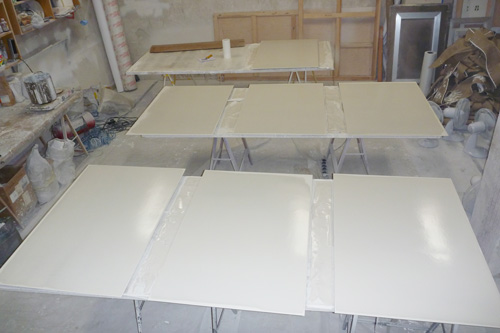 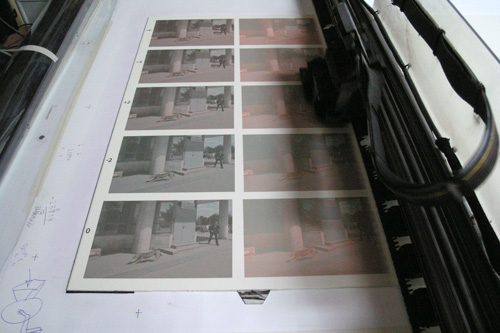