The Museo Reina Sofía collaborated with Factum Arte to create the weavings included in Leonor Serrano Rivas´ solo exhibition 'Natural Magic', scheduled in the museum from 21 September 2022 to 27 February 2023. Tablas de la Luna is a textile installation that takes its name from the Tables of the Motion of the Moon by Ernest W. Brown (1919), who tried to synthesise the movements and rotations of the moon on mathematical tables.

The series of tapestries was conceived by the artist when observing the similarity between the punched cards used in music and those used to operate Jacquard looms. Punchcards transform information into simple commands. These instructions are represented by the presence or absence of holes in predefined positions on a piece of stiff paper. Serrano Rivas wanted to convert the audio from the music video The sun is counting the earth's rotations (on show in the exhibition) into a format that could be turned into a punchcard and then rematerialised as a jacquard tapestry - therefore translating music into woven fabric.

This experimental project required about nine months of work to devise and test various solutions overcoming both technical and mechanical challenges. The artist, in collaboration with the artisan Javier Sáez and Isabel Fernandez, Head of Tapestries at Factum Arte, worked to find ways to mediate the ethereal nature of music and sound onto an ordered and orthogonal structure of fabric weaving.

The artist worked directly with the music composer to transform the score into a format compatible with the system used in pianola punched cards, extracting and visualising the sound of each instrument separately. She then worked to transfer the code into a Jacquard loom punched card. As the two systems share the use of a binary code (0 and 1, absence and presence), it was possible to establish a common working ground, albeit with two major issues to solve: the fact that punched cards are not used anymore in Jacquard looms, replaced by more advanced digital coding, and that the reading system of loom cards differs from the sequential reading of a music sheet. 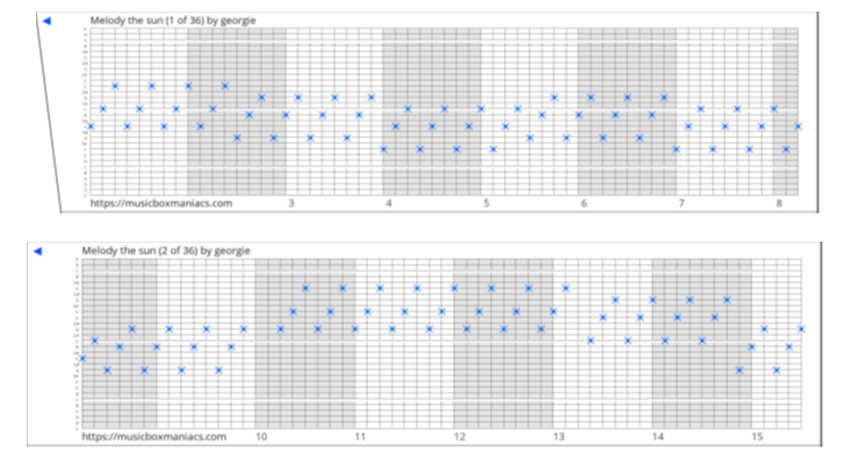 As punched cards are meant to be read vertically, going from top to bottom of each column before moving to the next one, the main challenge was to devise a way to translate the horizontal, sequential music reading into a punching card set. Several inspiring conversations and experimentations over the next months ultimately led to the creation of a set of digital punched loom cards that mediated the music into a textile-compatible format. Each card would be woven into the melody of four different instruments, represented by four different-coloured wefts and chord ligaments.

The team found out that, if not properly scaled, the final drawing would be difficult to see without the help of a magnifying glass. With the help of Blanca Nieto and Isabel Fernandez at Factum Arte, the artist and the weaver began to study a way to appropriately scale the punched card music sheet into a digital file format for a modern Jacquard loom, so that the final design could be appreciated by the visitors when walking in the room. Each knot formed from the punched card was multiplied by 160, as each stitch of the ligature represented 160 threads of the fabric. The composition chart of the fabric resulted in 4800 needles (160x30=4800).

As the final works were conceived to be placed on the floor of the Protocol Room in the Reina Sofia Museum, a second layer of fabric was created to support and fix areas where the weft was too sparse and fragile. The artist's decision of how to exhibit the work determined the search for materials and base structures that were strong enough to support the passage of visitors during the exhibition, and ended up adding another layer of interest and information to the final works.

Meanwhile, the artist kept developing and enriching the base work for the final digital weaving files, thanks to her knowledge of the textile medium. The twelve weft selectors became actual different musical instruments that composed the weaving melody on the weft. In building up the canvas, this process ends up showing the position of each instrument within its textile space and reflects the duration of the different sounds in a graphic, but intuitive way. Through its superimpositions and parallelisms, contrasts and oppositions, the tapestry acquired richness and entity.

The process of choosing the colours of the final tapestries also played a role in the texture of the tapestry. The artist decided to also add the sound frequencies of the digital music as a subtle pattern in the same colour as the base fabric, an opportunity that Javier Sáez turned into the development of a damask-like pattern. This subtle relief on the background will be perceived in different ways depending on the light falling on the piece throughout the day and if exposed in a room with natural light, adding another layer of depth, dynamism and complexity to the piece. 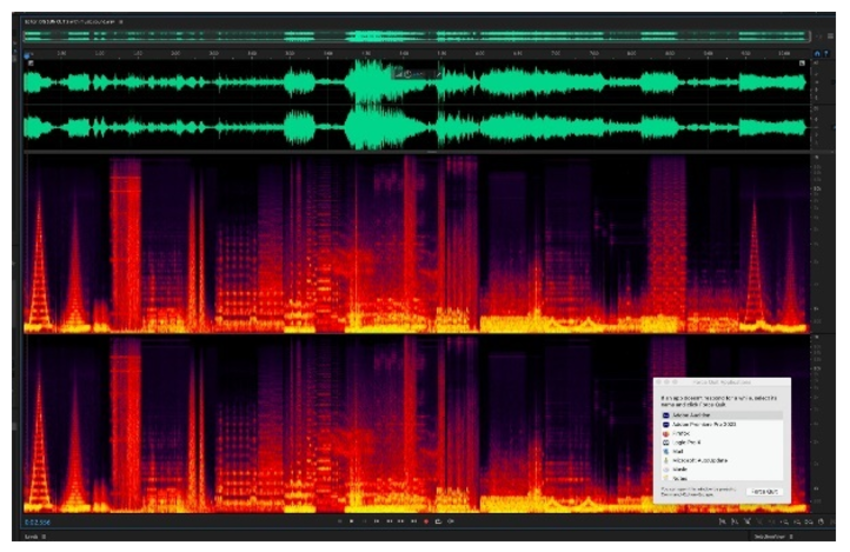 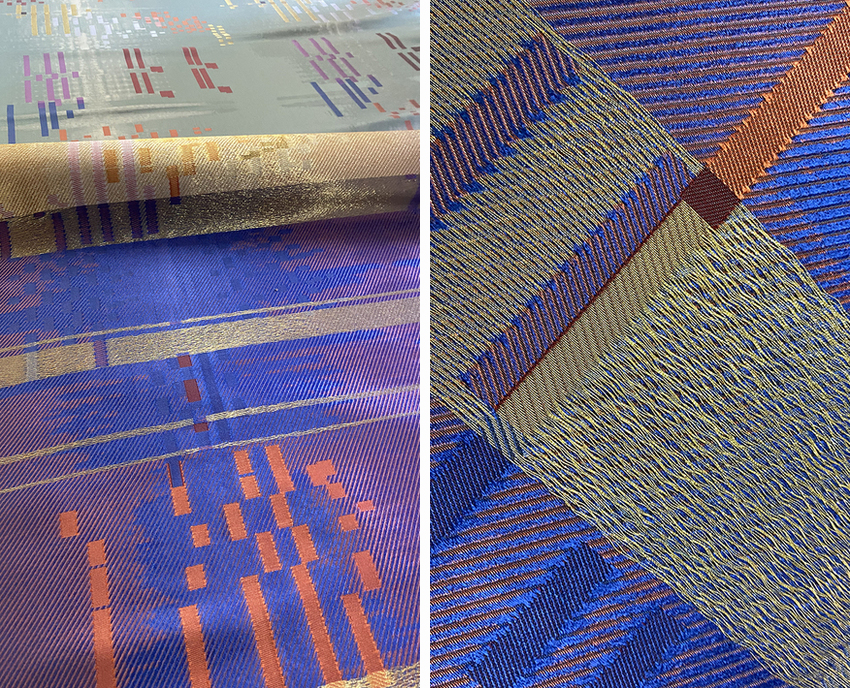 Details of the back of the weaving © Adam Lowe

Thanks to the variety of colours available, when the final type of threads were chosen, it was ultimately decided that the four final tapestries would be woven in four different colours, over which each instrument would show in a different colour.

The installation was completed after a visit to a punchcard-operated Jacquard loom, which inspired the artist to create physical punched cards of the music sheet that was mediated into fabric in the exhibition room.

Our loom thus sits somewhere between mind and hand, reasonand memory: it is linked to the music translated onto punched cards, which are then used to create a pattern that can eventually be inhabited, stepped on, touched, contemplated, and performed through music.
With its countless transformations, Natural Magic bids visitors farewell in this room with a gradually fading song, a circular illusion. Magic becomes a loom on which we walk, and on which the invisible notes of a stellar wind come into being. 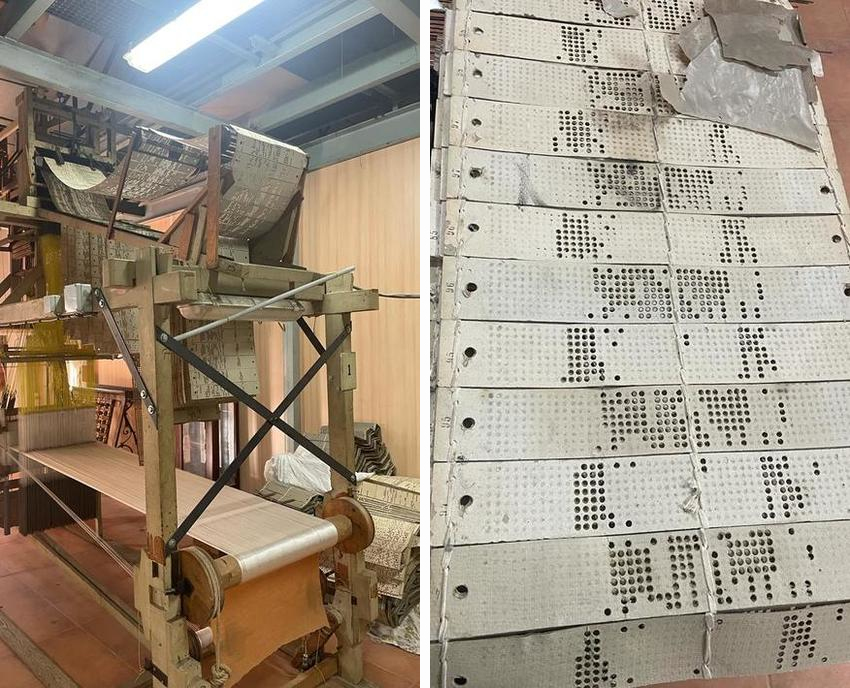 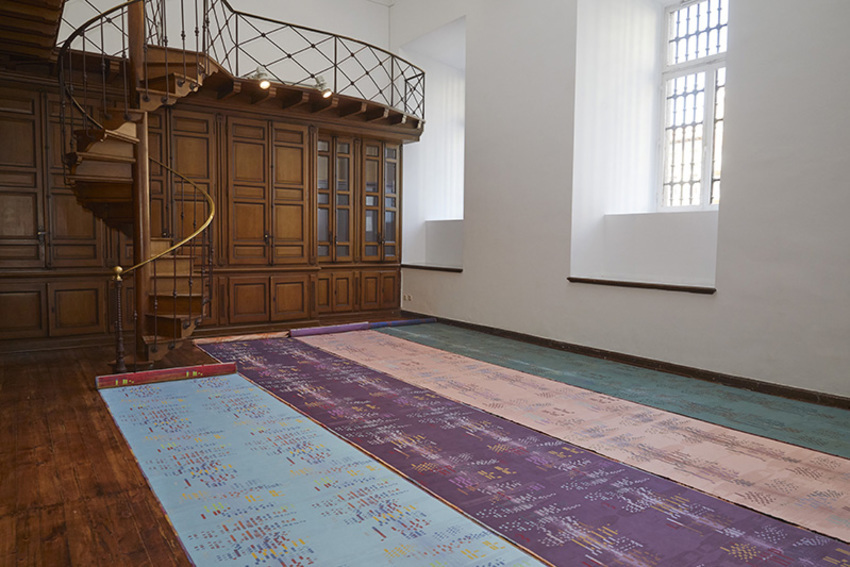 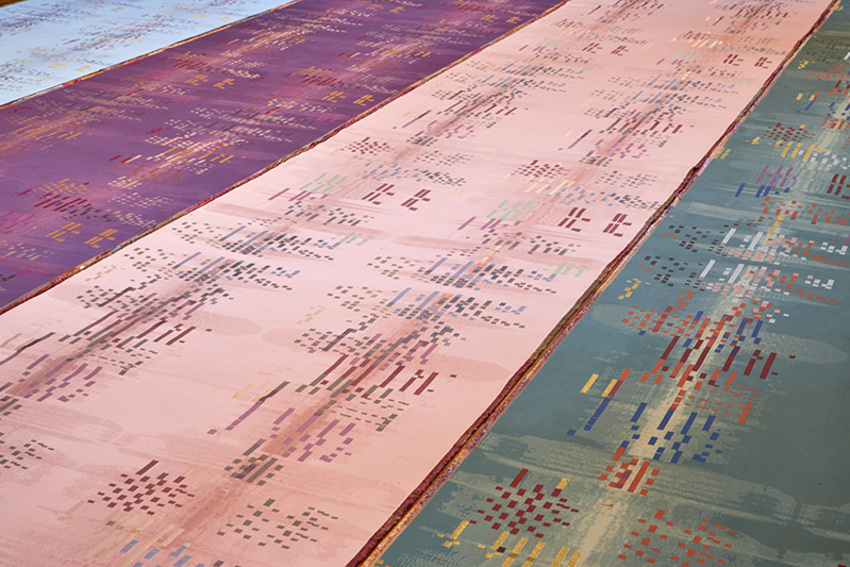 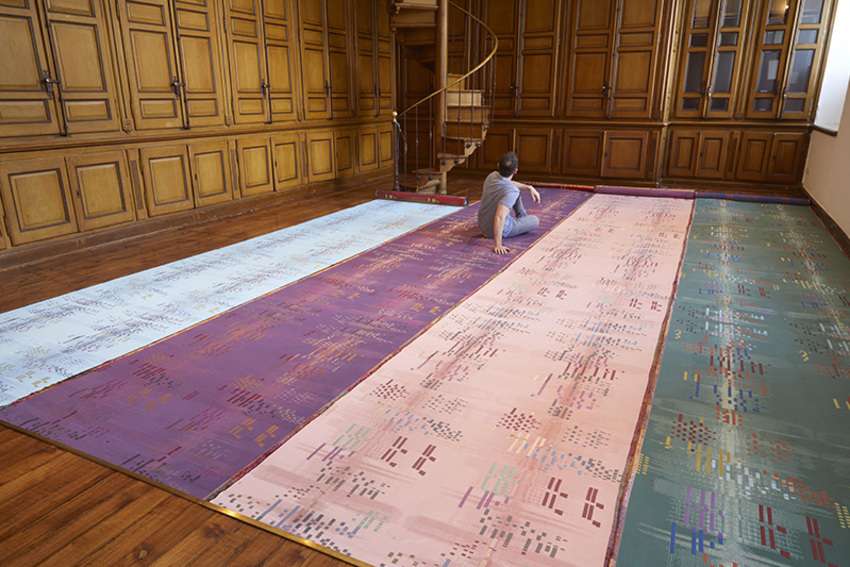