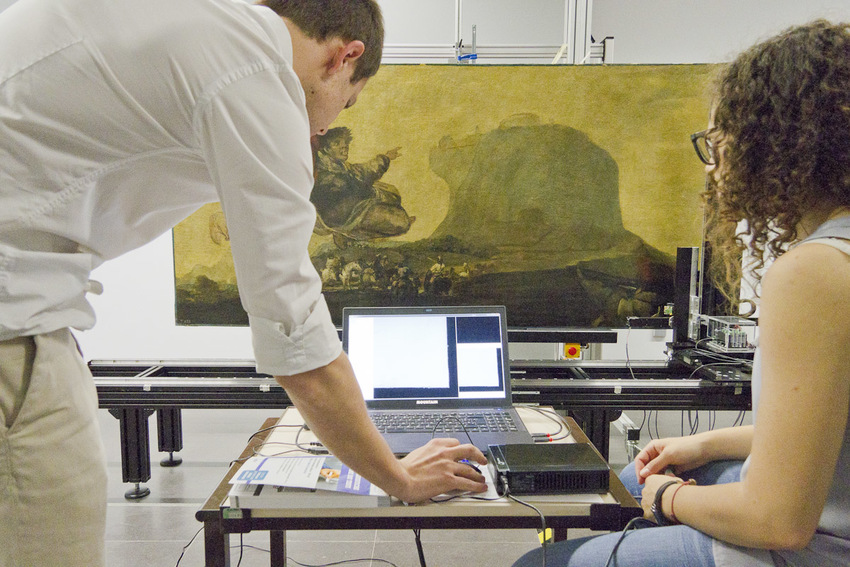 Factum Arte’s recording of Goya's Black Paintings in 2014 was the first large-scale project of high-resolution 3D digitisation of the surface of paintings ever realised. The methodology and outcomes of this project have set the benchmark of how surface relief should be considered as a primary source for understanding the complex historic trajectories of artworks and cultural objects within a museum collection, for their preservation, study and dissemination.

The Black Paintings are the series of fourteen works that Goya painted with oil directly onto the walls of his house in Madrid, known as La Quinta del Sordo. Located by the Manzanares river, the property (of which there are no more traces today) was acquired in 1819 and left to his grandson Mariano in 1823 when Goya left for France. The paintings were transferred onto canvas in 1874 by Salvador Martinez-Cubells, a restorer at the Museo del Prado, and donated to the Spanish State in 1881 by their owner Baron Frédéric Émile d'Erlanger. The artworks were then assigned to the Museo del Prado, where they are housed today.

In 2014, the Museo del Prado commissioned Factum Arte to carry out high resolution 3D scanning and composite colour photography of each of the Black Paintings, for documentation and research purposes. The work also involved the combination of the obtained 3D and colour data by Factum with other layers of information provided by the Prado’s Technical Department. This included X-ray, infra-red and ultra-violet analyses, as well as a series of old photographs taken by Jean Laurent of the pictures still on the walls of the original house. The project was initiated by Manuela Mena, former Curator of Goya and 18th century Paintings, and enthusiastically supported by Miguel Zugaza, former Director of the Museo del Prado.

Factum Arte and Factum Foundation have maintained an active collaboration with the Museo del Prado for more than fifteen years. Previous projects include the creation of a golden lion for Matteo de Bonarelli’s table (2005), a facsimile in bronze of Eduardo Barron’s Seneca and Nero sculpture (2006), the facsimile of Goya’s Queen Maria Luisa on Horseback (2018) or the 3D and colour digitisation of Fra Angelico’s Annunciation panel and predella (2019), to name a few.

To capture the surface relief of paintings Factum employs the Lucida 3D Scanner, a non-contact, high resolution system developed in collaboration with Manuel Franquelo, specifically for the field of art and cultural heritage documentation. The Lucida 3D Scanner was first used in the Museo del Prado in 2011 to record the panel The Triumph of Eucharist over Idolatry by Rubens, before restoration. The obtained data offers an invaluable record of the shape and texture of the panel prior to the removal of the additions on the edges, as part of its restoration process. A plaster cast reproduction of the panel’s 3D information captured by Lucida was shown in the exhibition 'Rubens. The Triumph of Eucharist' at the Museo del Prado, curated by Alejandro Vergara (25 March - 29 September 2014). The celebrated series the Black Paintings by Francisco de Goya had been vastly studied over history, though their surface was never recorded in three dimensions until this project was completed. The condition of artworks can be inspected through the marks that time and human interventions left on their 'skin', and this is especially true in the case of the Black Paintings. The way the paintings look nowadays is very different from how they appeared when they were part of Goya’s house, mainly because the transfer from wall to canvas has essentially modified their material character. The high resolution 3D scanning offered the possibility of documenting and revealing the unique details of their surface, potentially facilitating new insights on the artworks and the artist who created them.

Factum Arte digitised the surface of the Black Paintings (a total area of about 35 sqm) over a period of two months in the Spring of 2014, working at the Museo del Prado’s frames restoration workshop in a space adapted to the scanning requirements. The paintings were temporarily removed from the gallery space in pairs, in order to carry out the 3D and colour recording by Factum’s technicians, as well as the other types of technical analyses (x-ray, infra-red and ultra-violet) by the Prado’s specialists. The paintings are listed below with their catalogue references and dimensions:

The calendar and order of the works was arranged in coordination with the Museo del Prado, with the goal of minimising the impact of the project on the normal museum activity and visiting hours. The first painting to be recorded was Two Old Men Eating, the smallest one of the series, then the others followed in order of increasing size until the largest one: Witches’ Sabbath. The team in charge of recording was formed by Carlos Bayod, Gabriel Scarpa, Gregoire Dupond, Nicolas Diez and Guendalina Damone. Alicia Guirao del Fresno documented the process. 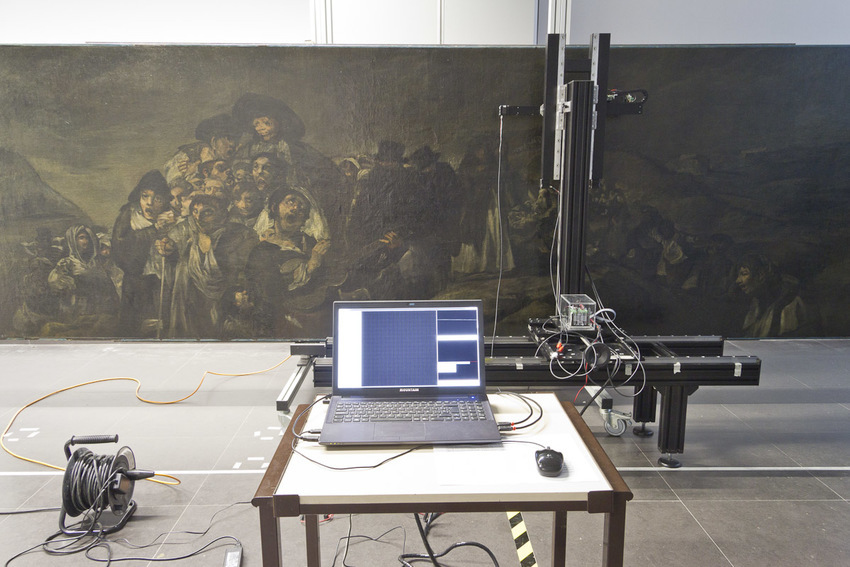 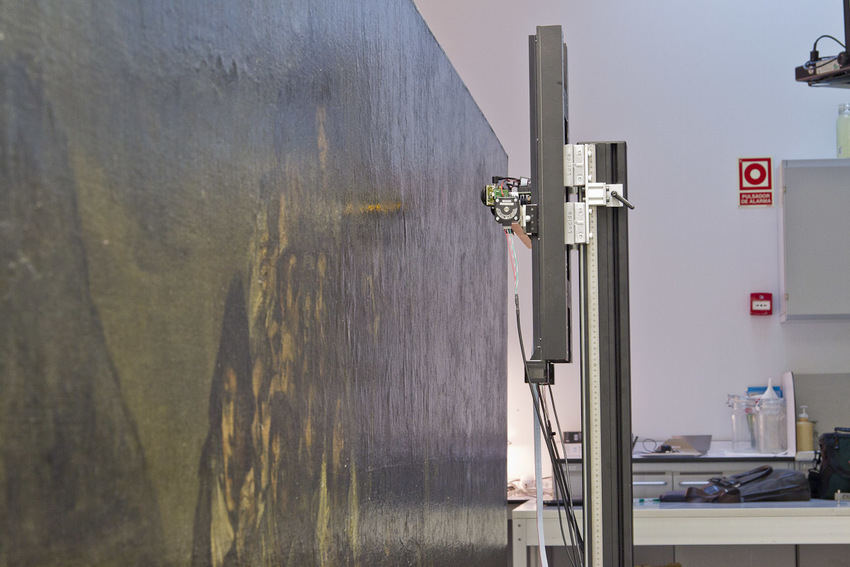 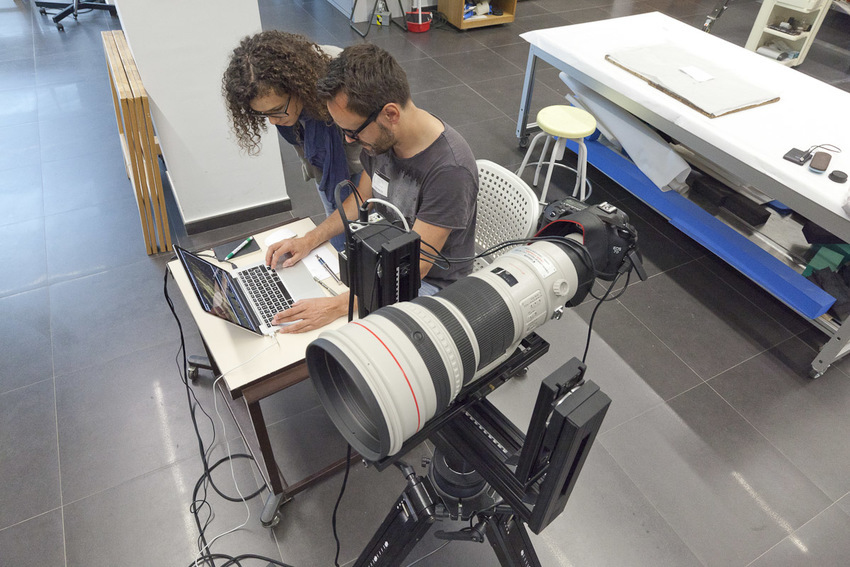 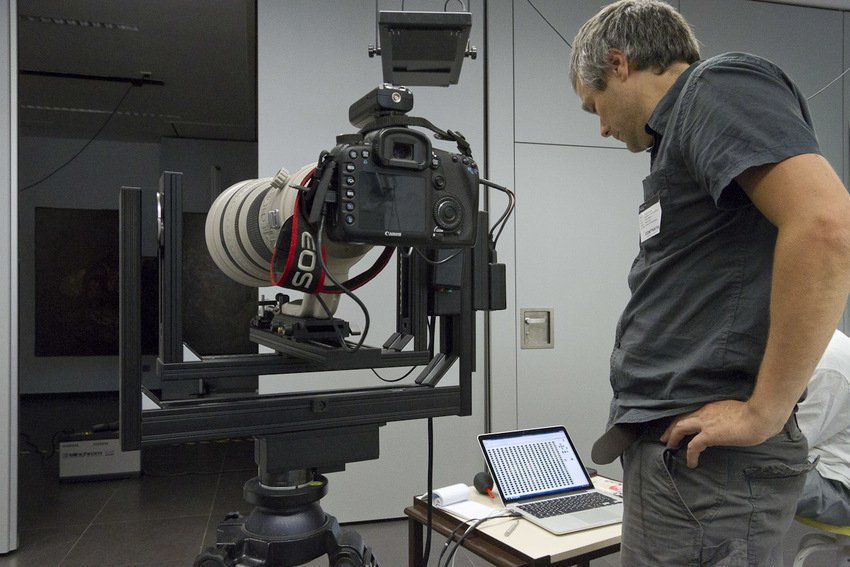 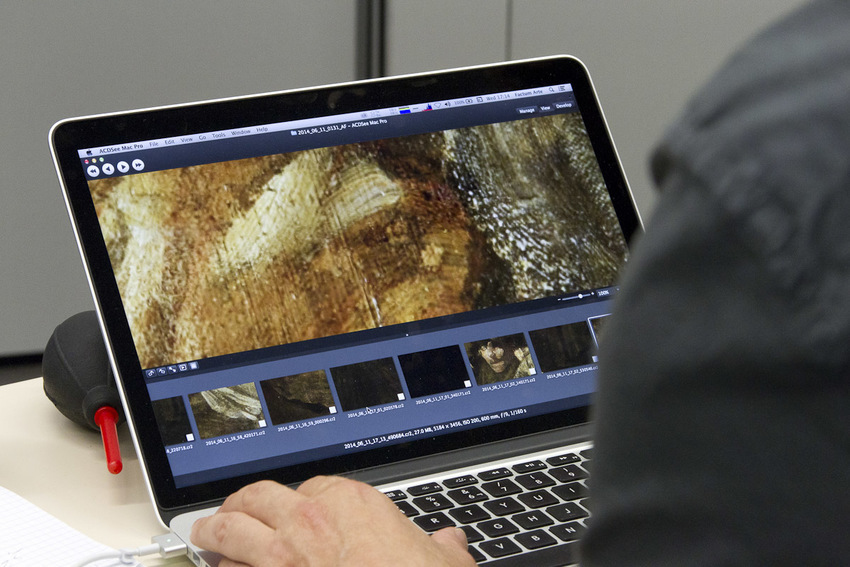 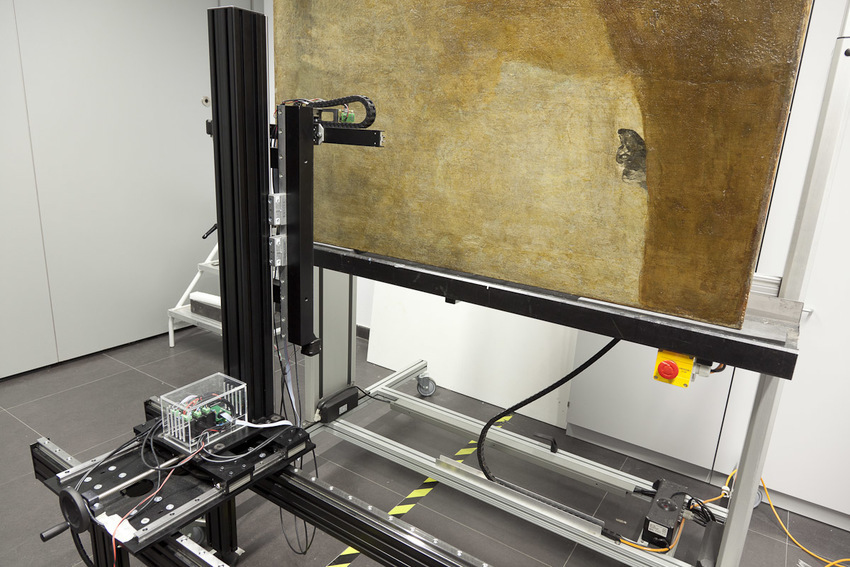 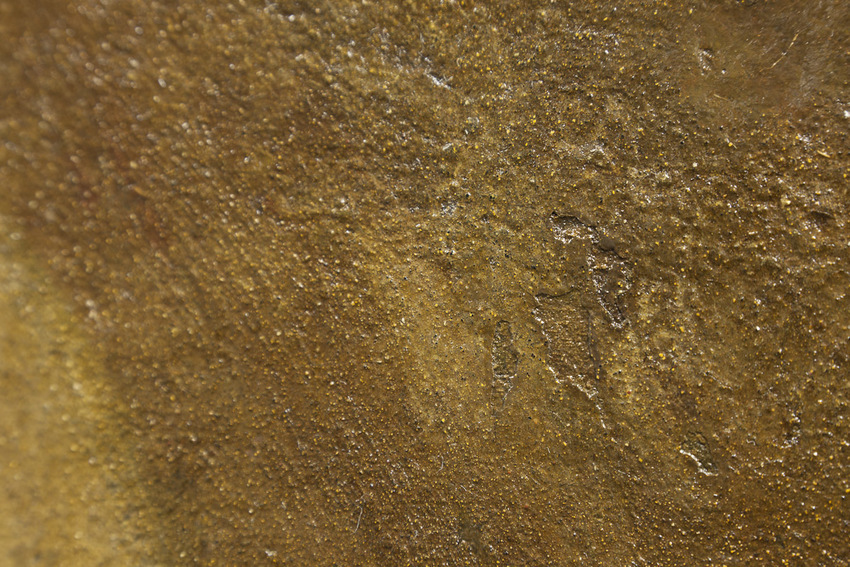 This was the first time that the Lucida 3D Scanner was used to document paintings with an area over 6 sqm. After this project the system has been applied to other large-scale artworks such as the two Murillo paintings at La Caridad in Seville (2018), Van Dyck’s 4th Earl of Pembroke family portrait in Wilton House (2020) and, above all, the Raphael Cartoons at the V&A in London, with a total area of 120+ sqm (2019). In all cases the surface detail is documented with similar resolution, 100 microns (or 10,000 points/cm2). Outside the museum environment, the Lucida 3D Scanner has been used since 2016 to record hundreds of sqm of painted reliefs inside the Tomb of Seti I in the Valley of the Kings: the largest project of close-range 3D surface digitisation to date, set to finalize by end 2021. 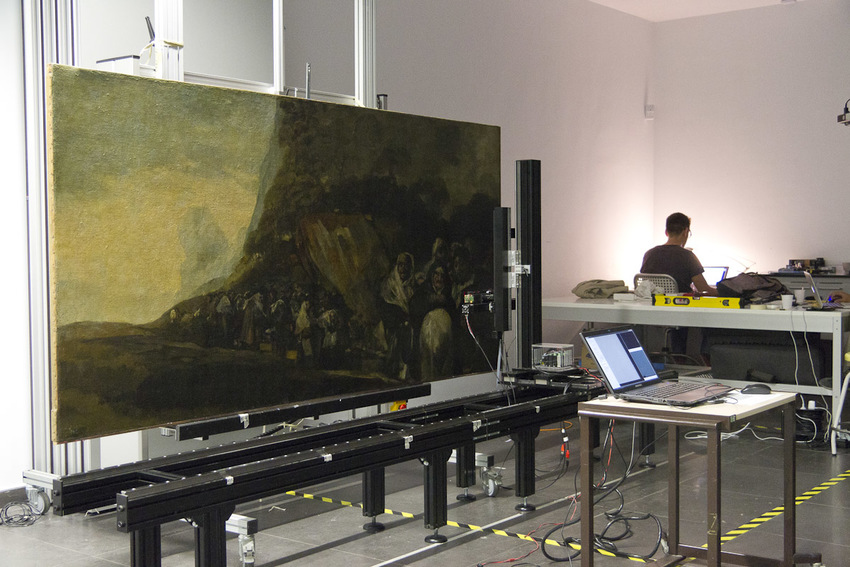 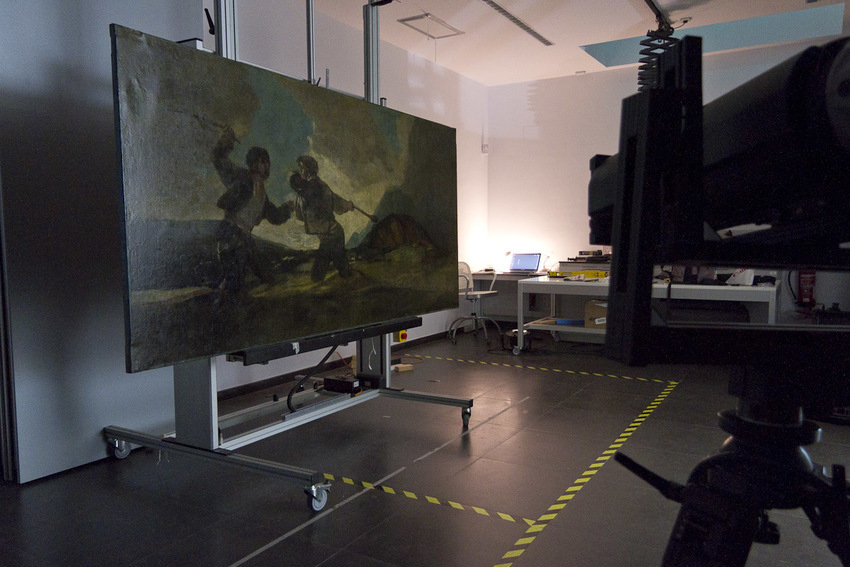 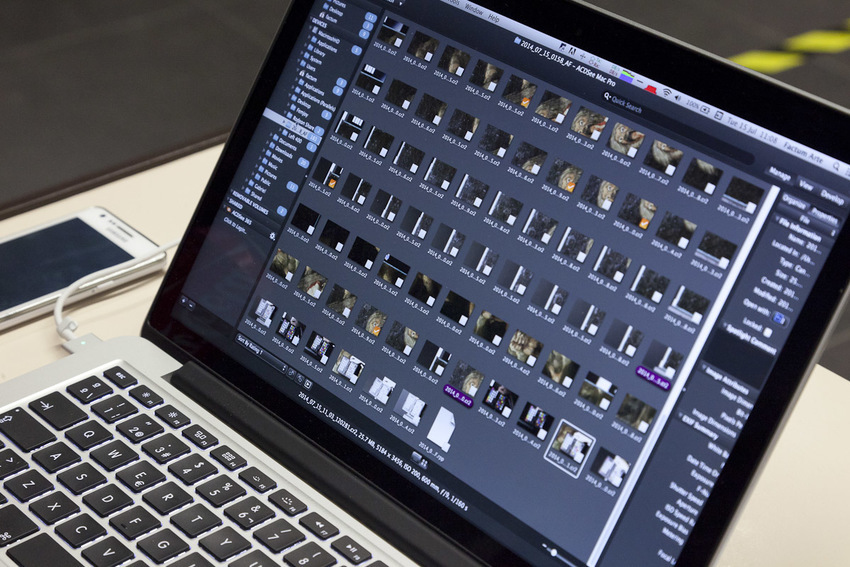 After a two-month period of digitisation at the Museo del Prado, the following months were dedicated to processing the obtained information and combining it with the other layers of data provided by the museum. This work presented various challenges. The first was the editing and stitching of all the individual colour photographs and all the scanning 'tiles' (sections of 48x48 cm acquired by the Lucida) that formed each painting. Although colour and relief are fundamentally different types of information, the tasks involved shared some similarities: since the Lucida makes it possible to work with 3D data as image files (greyscale depth maps and shaded renders), it is possible to use the same software (PTGui) used to align 2D panoramic photographs to the stitching of the scanning tiles. This eliminates the need of using large 3D files that would be impossible to handle, especially in the case of the large scale paintings.

Once the 3D shaded panorama of each painting (8bit TIFF at 254dpi) was finished, the colour panorama was registered on top of it. This is usually carried out in Photoshop in a delicate process in which small distortions are applied to the photograph so that each detail in the colour matches its correspondent detail on the surface relief. This is a critical step in communicating the information: the colour layer helps to understand the otherwise unfamiliar representation of relief in the render.

Once the colour and relief information obtained by Factum Arte were in perfect registration, it was then necessary to register the other layers of data provided by the Museo del Prado. The added difficulty of this step was that each type of survey consisted of images at different resolution and with their own types of distortion and specific features. The work involved, when necessary, the re-stitching of partial sections of these images, in order to facilitate the registration. The final files were all prepared to be visualised at 300 dpi. 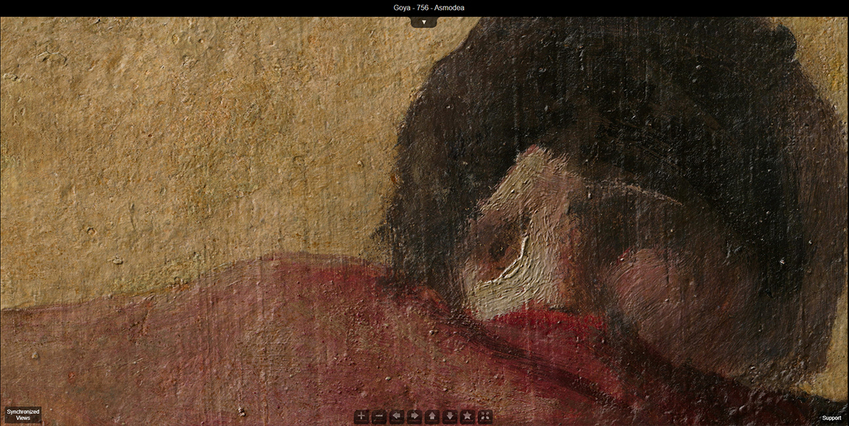 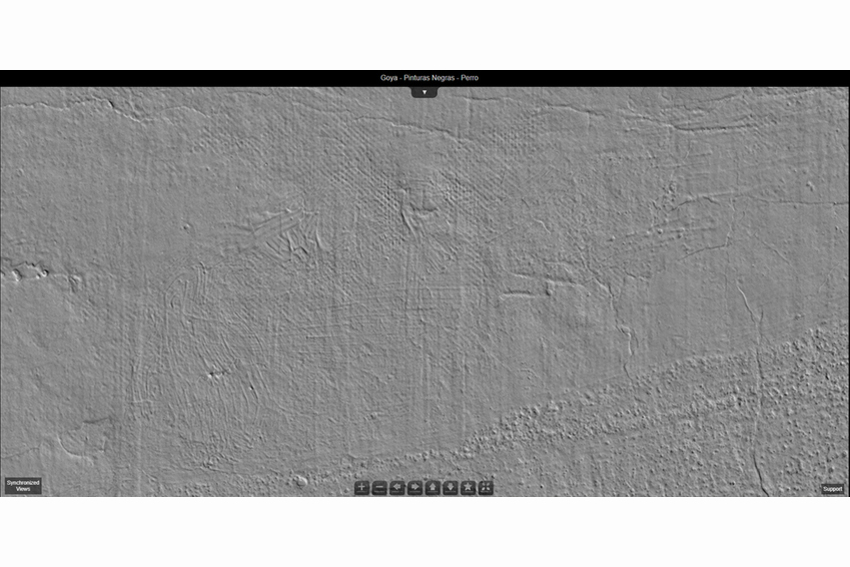 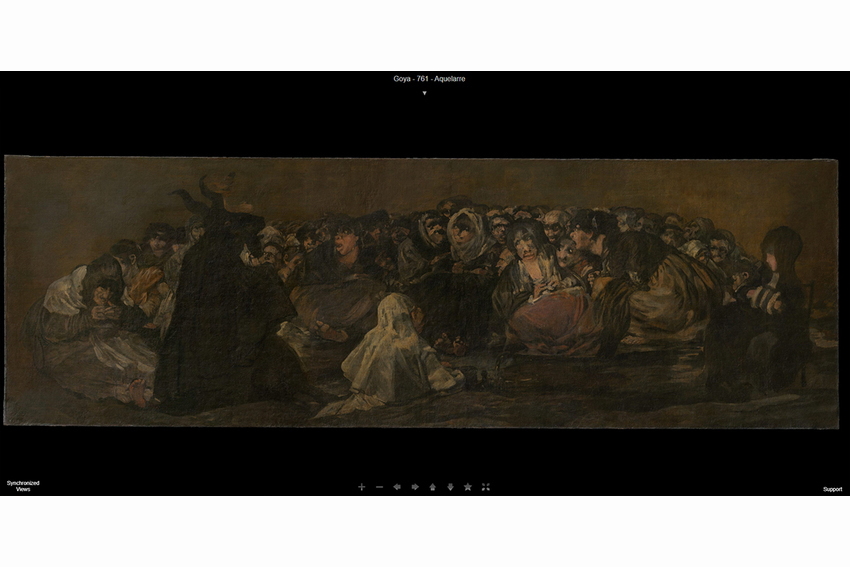 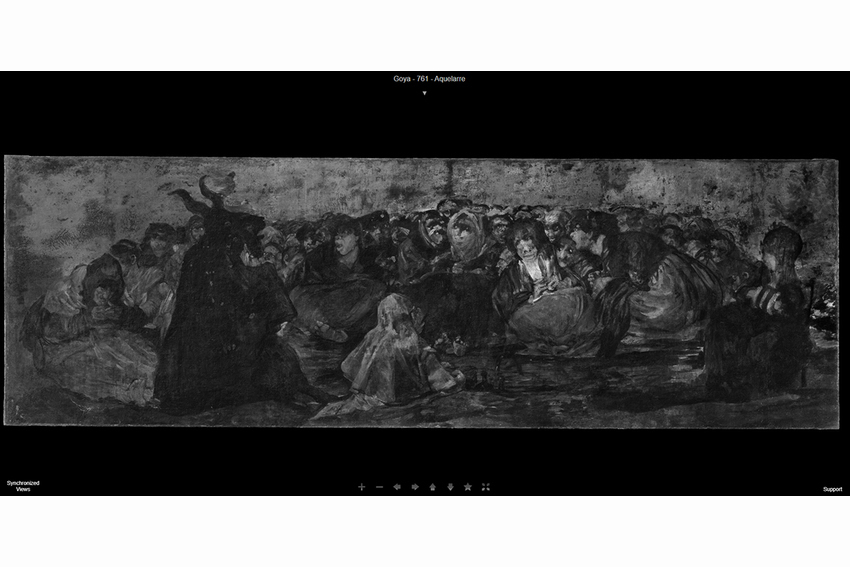 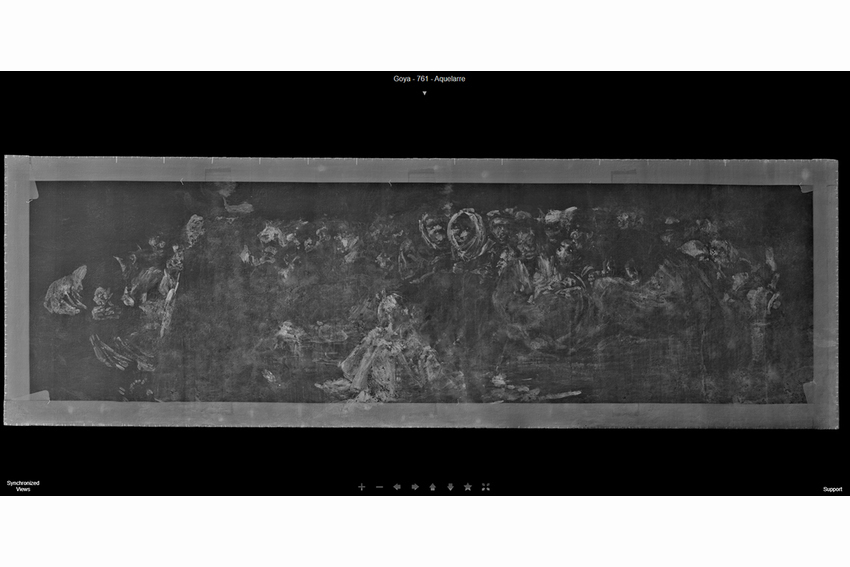 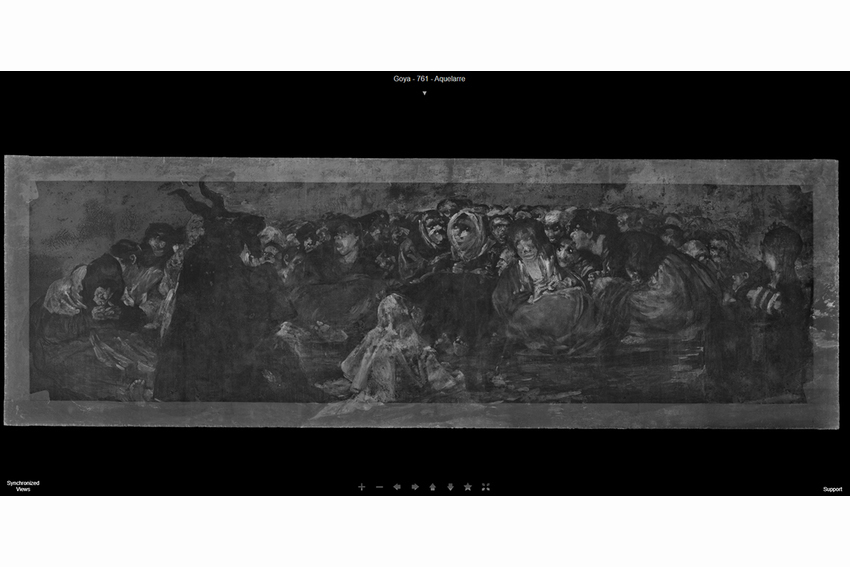 The digital data will be made public by the Museo del Prado at a later stage.