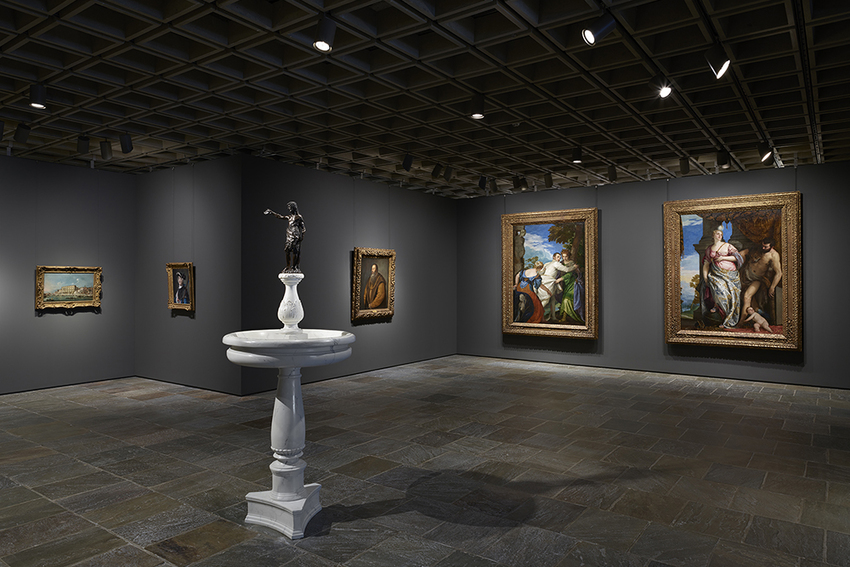 This grand gallery of Italian Renaissance paintings includes work by Veronese and Titian. Centrally located is a bronze by Francesco da Sangallo, placed atop a recreation of its original base made by Factum Arte; photo: Joe Coscia © courtesy of The Frick Collection

The Frick Collection in New York houses the only signed bronze sculpture by Francesco da Sangallo (1494–1576), son of the Renaissance sculptor and architect Giuliano da Sangallo. Francesco was appointed capomastro (master builder) of the Basilica di San Pietro in 1542 and later of the Church of Santa Maria del Fiore in Florence in 1543, and he is mainly known for his marble and architectural works.

Although he worked on some small bronze works (mainly medals) during his life, the 53cm-tall bronze sculpture depicting St. John the Baptist, created for the baptismal font of the church of Santa Maria delle Carceri in Prato, is his only known signed bronze figure. Dated between 1534 and 1538 and solid-cast in a single pour, the sculpture was intended for the top part of the marble acquasantiera (holy water basin) commissioned by the greengrocers and watermelon sellers of Prato and carved by Giovanfrancesco Pagni in 1534. Divorced from its marble support in the 1890s and replaced with a copy by Oreste Ghilleri in 1902, the original was later acquired by The Frick Collection in New York, where it has been on display since 1916 as the only bronze statuette intended for a church space.

New York's celebrated Frick Collection is currently renovating its historic buildings and has moved to a temporary new home during the duration of this project. Beginning March 18th, the museum and library are presented as Frick Madison in the former site of the Whitney Museum of American Art (until recently the Met Breur), a relocation that has permitted the museum to show its collection in a new light. Towards that end the Frick and Factum Arte have partnered on an unprecedented recontextualization of Sangallo's bronze figure, pairing it with a recreation of its original baptismal font, made possible through the generous gift of Fabrizio Moretti. Sangallo's remarkable work is now shown in the center of a grand cross-shaped gallery of Italian masterpieces at Frick Madison.

In the summer of 2020, the original font was recorded in high resolution by Pedro Miró using structured white light scanning. A team of craftsmen from Factum Arte then worked on recreating the marble stoop without the oxidisation and cracks that the original one presents after more than four hundred years of use. 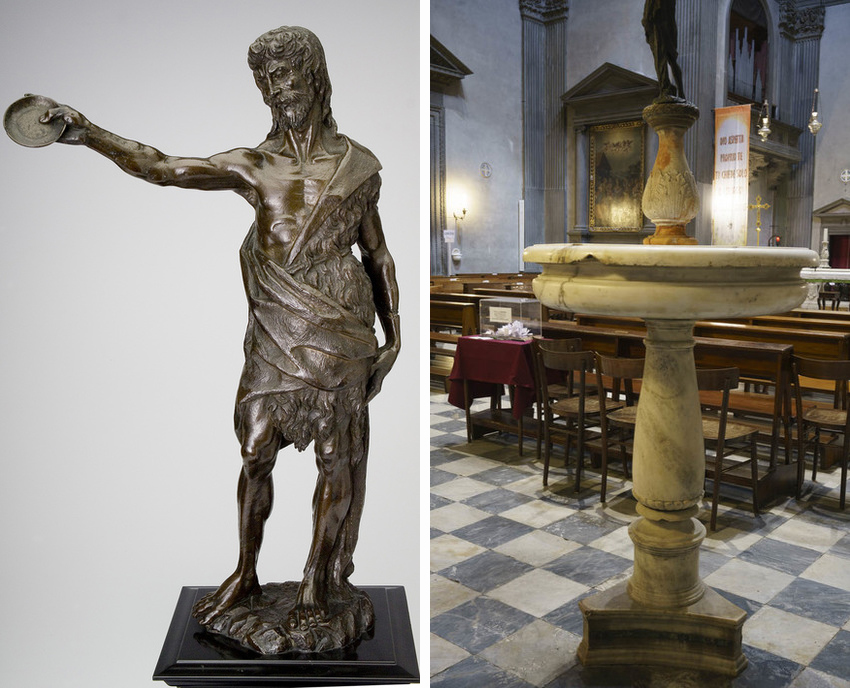 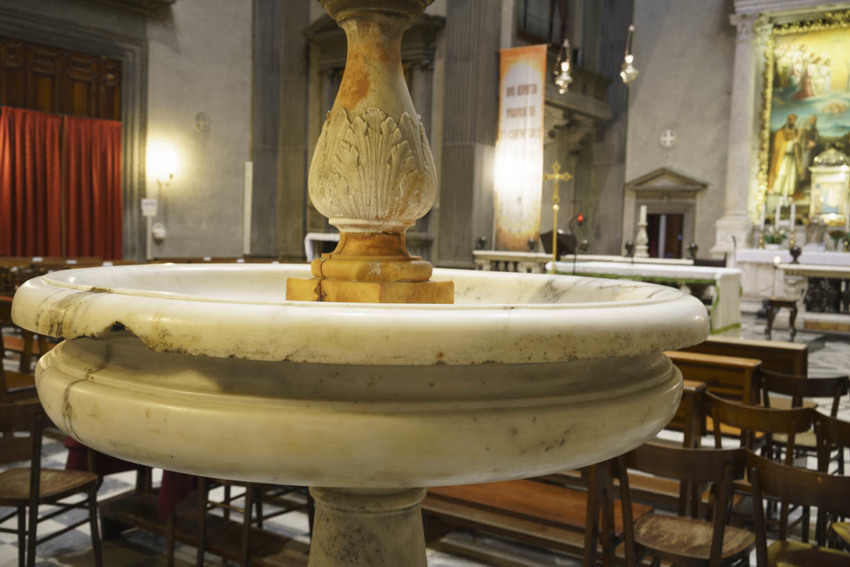 Detail of the original water font. Centuries of constant use have oxidised the marble surface and damaged the structure © Pedro Mirò for Factum Foundation

As the bronze sculpture is quite heavy, weighing 20.5kg, an inner steel structure was used in the recreation to help better distribute its weight. The 3D model of the font was directly prototyped in polyurethane on 1:1 scale, using a 7-axis robot. The prototype was then retouched using plaster to smooth out the surface and fill in the cracks, while the finer details, such as the flower and acanthus leaves ornaments on the stoop, were 3D printed and added to the surface. 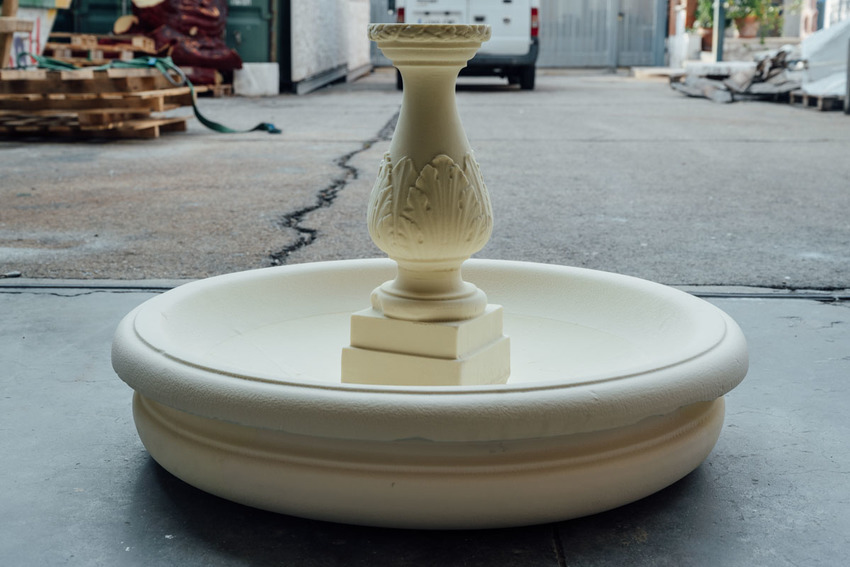 CNC-routed sections of the recreation. In this phase, the prototype presents cracks of the original font © Oak Taylor Smith for Factum Arte 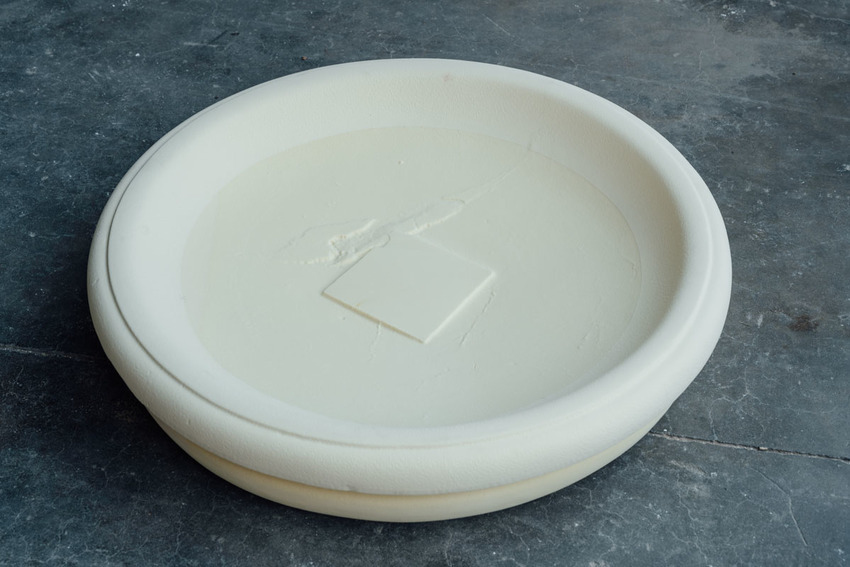 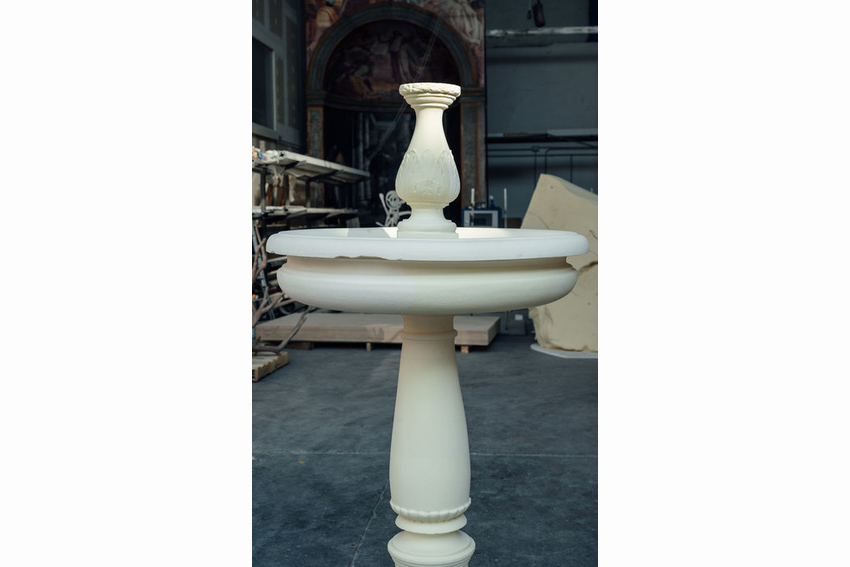 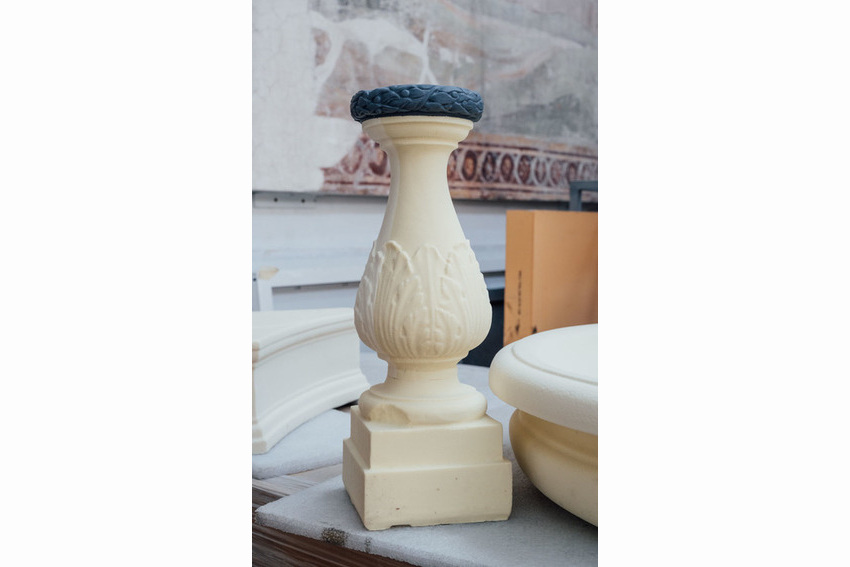 CNC-routed sections of the recreation, with a 3D-printed detail © Oak Taylor Smith for Factum Arte 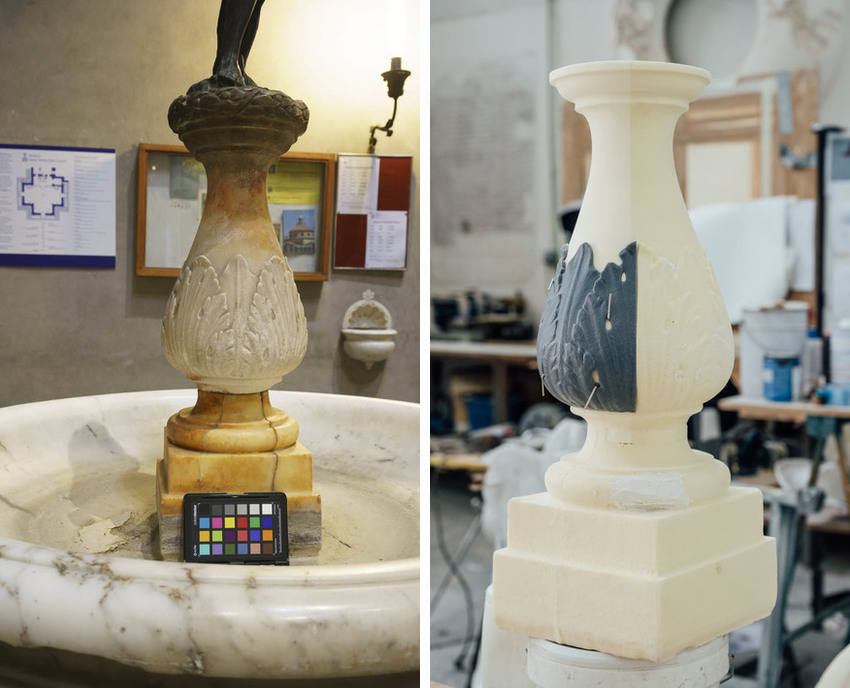 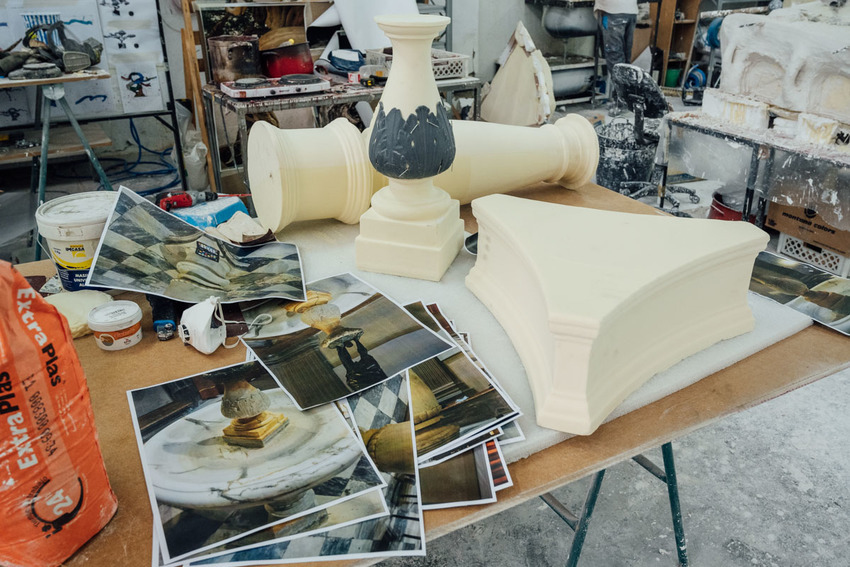 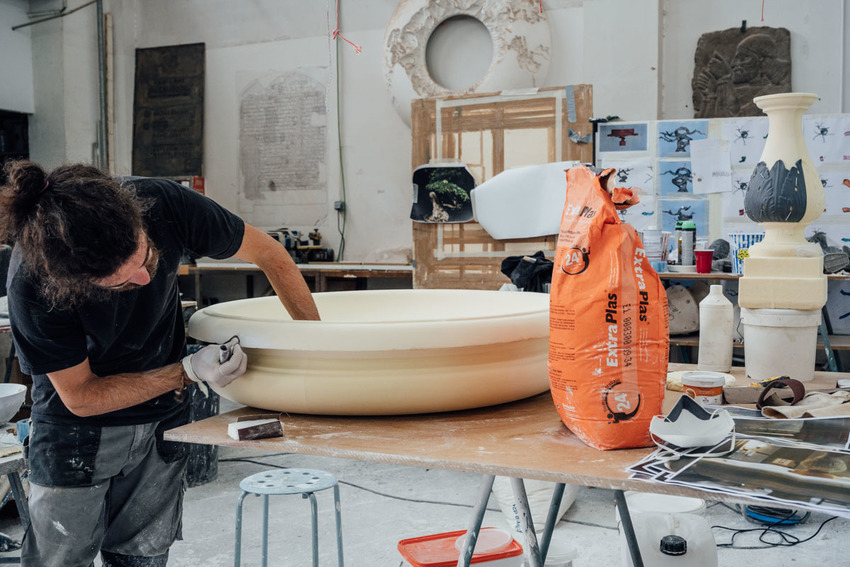 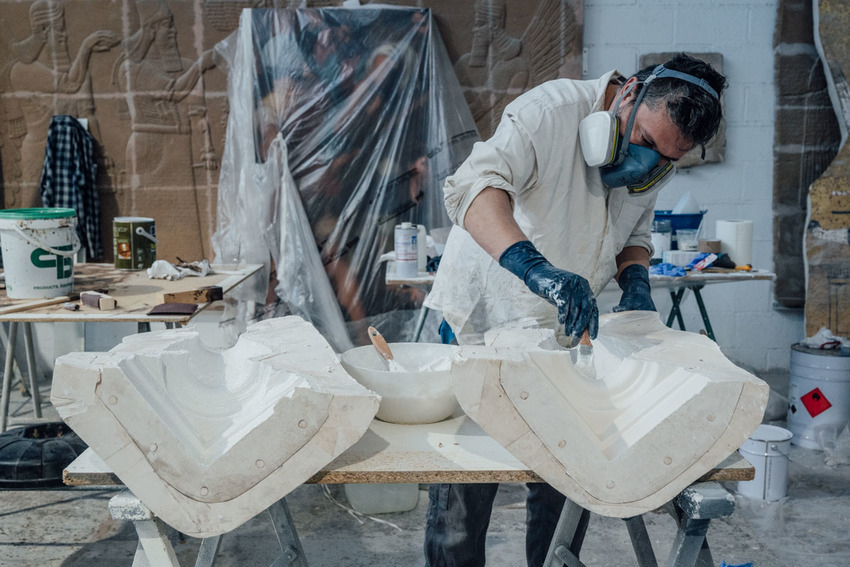 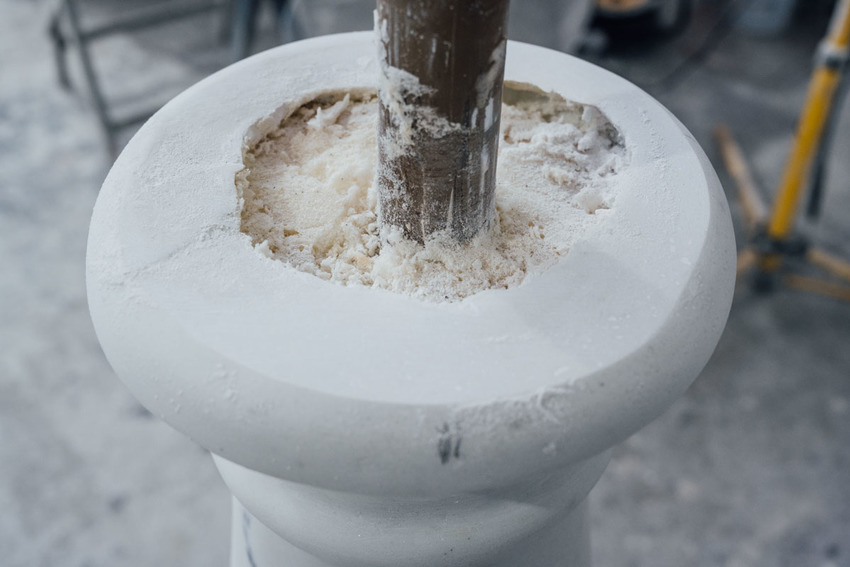 Each section was then moulded and cast in ultraviolet-resistant resin mixed with a high concentration of marble powder, reinforced with fiberglass. The lower section of the fount was filled in plaster and stone for added stability, while the top half was filled with polyurethane. The veins were hand-painted during the production of the cast to achieve a softer and more natural effect.