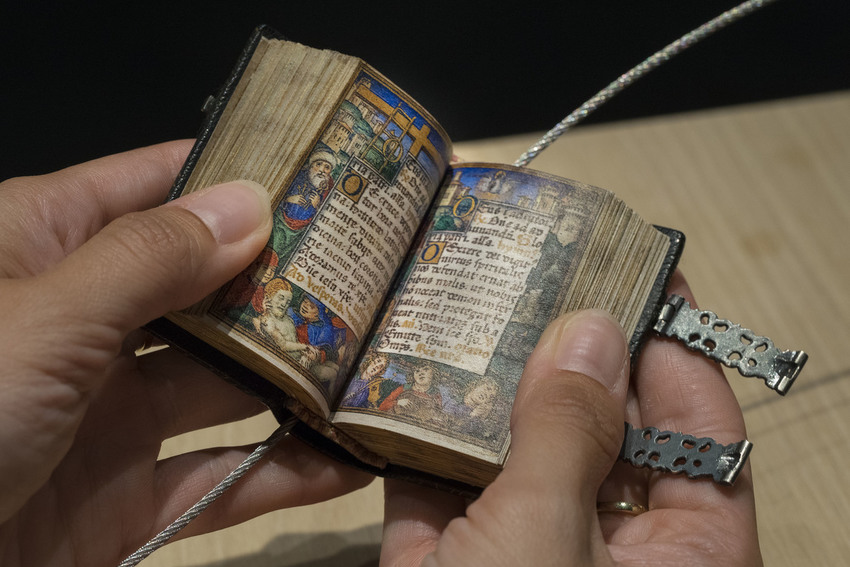 Handling a facsimile of the miniature book of hours known as the Cini Offiziolo ; the data to create the facsimile was recorded using the custom-designed miniature book scanner © Factum Foundation

Factum Foundation designed a miniature manuscript scanner in the context of a 2015 digitisation and rematerialisation project for the Fondazione Giorgio Cini (Venice). The scanner was created expressly to photograph a diminutive manuscript from the renowned Cini collections: L'Offiziolo di Carlo VIII. This exquisite book of hours, illuminated with scenes of peasant life and agricultural labour, was presented to King Charles VIII of France by the Duke of Milan Ludovico Sforza in 1494. Its miniature size (it is approximately 6 cm tall and 4 cm wide) and extreme fragility mean that Charles VIII’s Offiziolo is rarely exhibited to the public.

In order to overcome the issues inherent with displaying the Cini Offiziolo, a facsimile was made for the exhibition Mindful Hands: Masterpieces of illumination (Venice, September 2016-January 2017), developed by the Fondazione Cini with Studio Michele de Lucchi and Factum Arte. The exhibition showed illuminated leaves and cuttings of initials alongside illuminated codices from the Cini’s collection of Medieval and Renaissance manuscripts; Factum Arte was also comissioned with generating multimedia installations introducing the craft of Medival manuscript production. It was in this context that Factum imaged the Offiziolo di Charles VIII – the photographs would later be printed on vellum and bound to produce a life-size facsimile of the miniature book for the Mindful Hands exhibition. The images were also enlarged for a display that made the tiny scenes of peasant life seen in the Offiziolo more accessible to the public.

Recording the Cini Offiziolo with the miniature book scanner 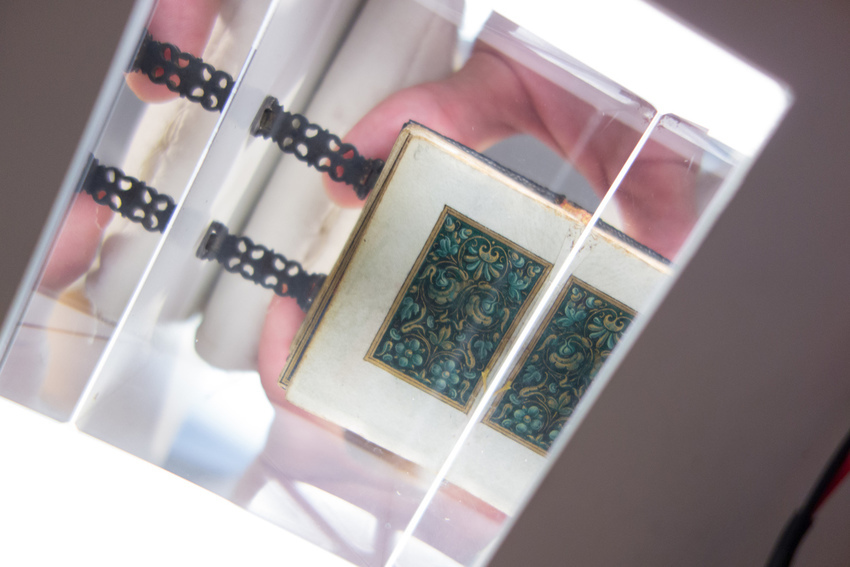 Commercial imaging options were unsuitable because of the size and fragility of the manuscript, which can only be opened to a maximum 50° angle. To overcome the problem, Factum's miniature book scanner employed a mirrored optical-glass prism/ camera system, an option that allowed us to safely carry out a high-resolution recording of the 220 pages of the Offiziolo within the constraints imposed by conservators.

The small prism in the scanner was made of solid optical glass coated with mirror paint. The page of the book being recorded was held against the vertical plane of the prism whilst the opposite page rested on a plane at a 45° angle i.e. the Offiziolo was never open to more than 45°. The angled plane was mirror coated such that the page being recorded was reflected down, thus ‘exiting’ the prism. Low-temperature high CRI lights positioned on either side of the prism provided lighting for the imaging.

The camera system at the time – Canon 5DIII and 100 2.8 macro lens – was attached to a frame with a micro rail so framing and focus could be precisely adjusted. The camera recorded each reflected image to a maximum resolution of 200 dpi. However, were such a recording to take place again, the camera and lighting system could be straightforwardly updated to increase the resolution of the data.

The images below show the process of recording the Offiziolo at Fondazione Cini in Venice, together with some of the results of this unique digitisation project: 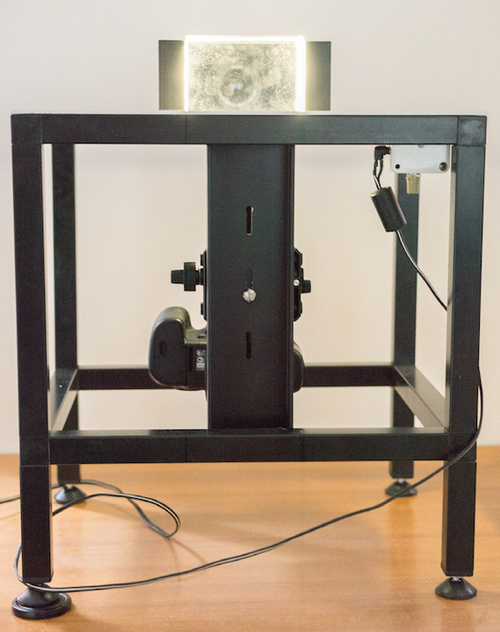 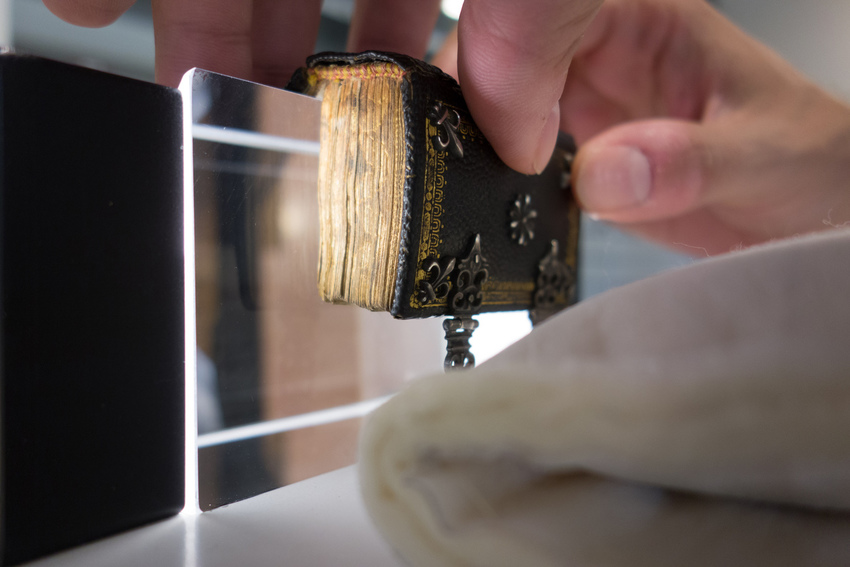 Recording the Cini Offiziolo with the miniature scanner © Factum Foundation 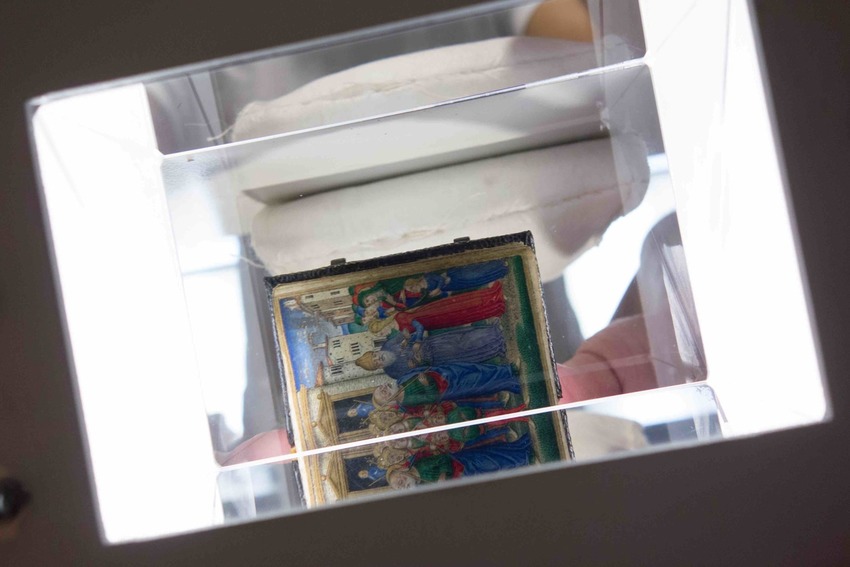 The Offiziolo viewed from below through the scanner prism © Factum Foundation 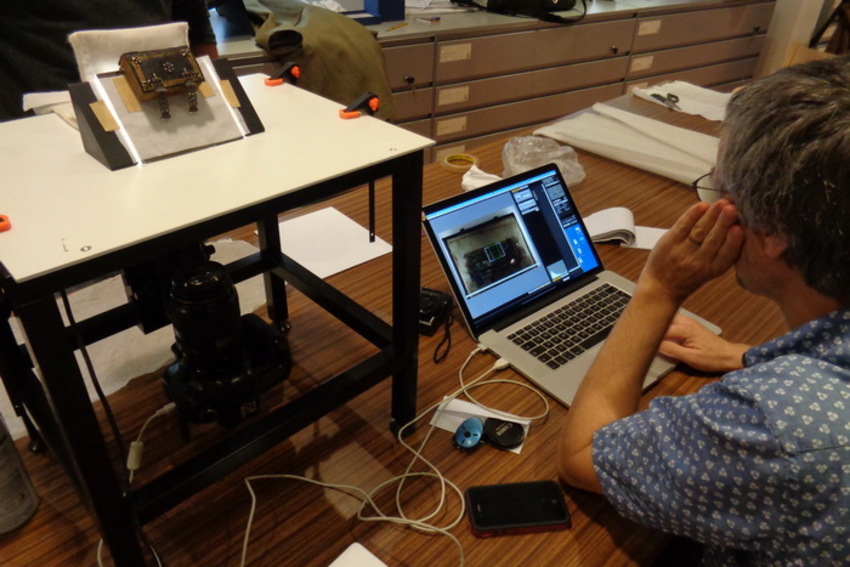 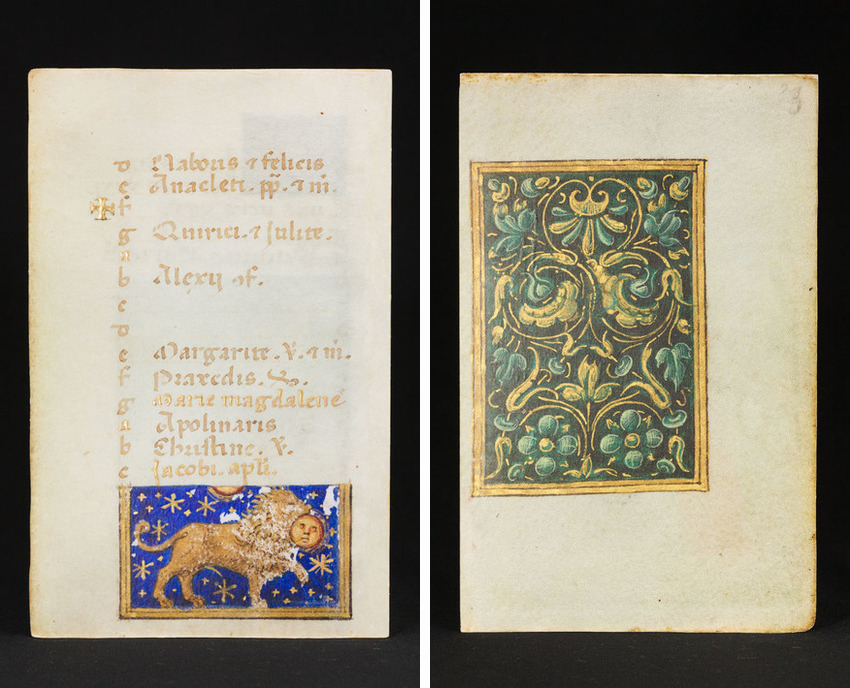 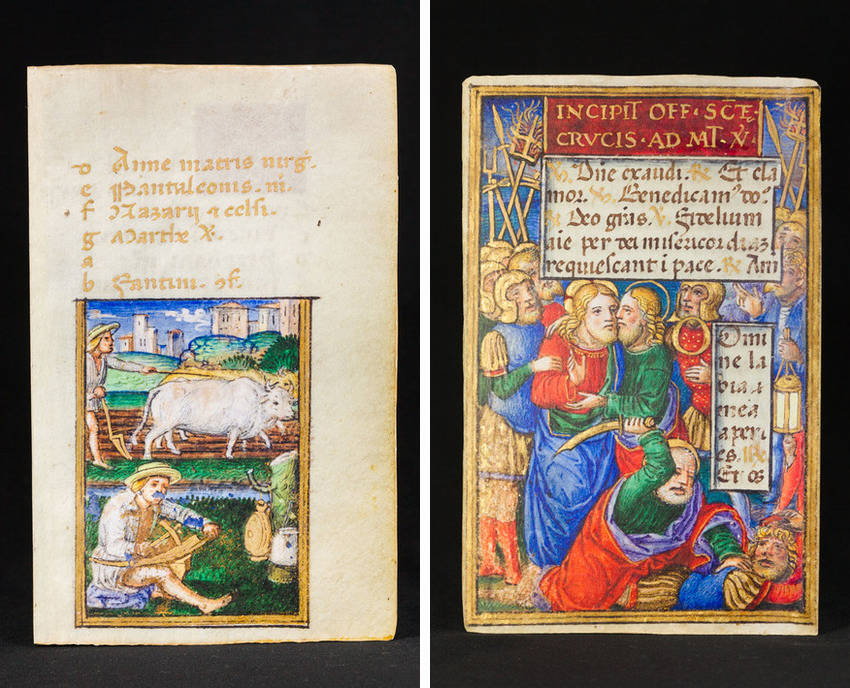 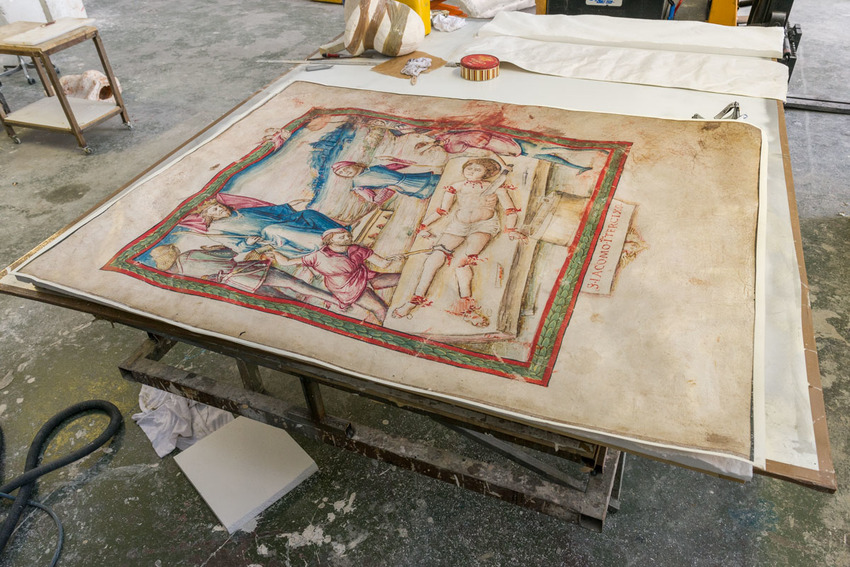 In the workshops: printing enlarged facsimiles of pages from the Martirologio di Ferrara © Factum Foundation 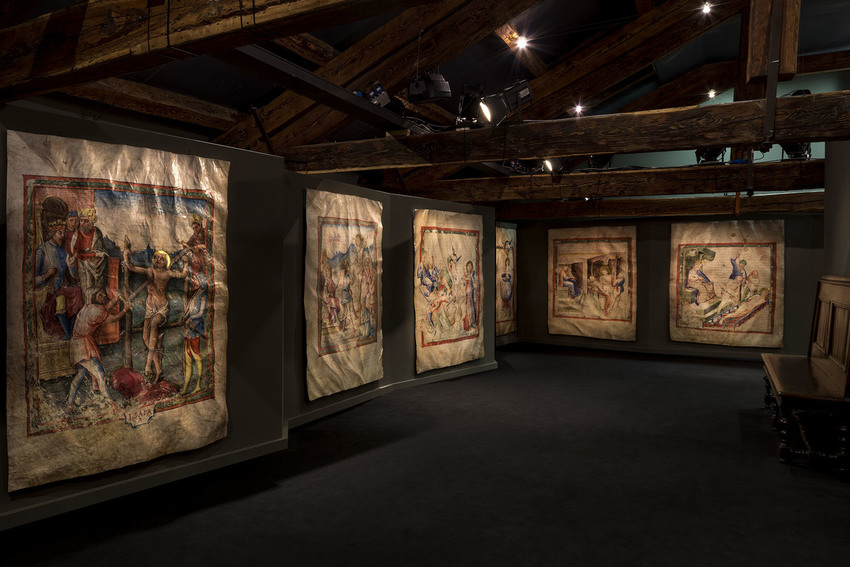 The scanner was designed by Dwight Perry. The mirrored optical-glass prism was made by Ben Gaskell.