Medicine, painted by Gustav Klimt for the University of Vienna ceiling, was destroyed by retreating Nazi troops in 1945 alongside two other paintings from the same series, Philosophy and Jurisprudence. At the time, the allegorical depiction of Hygeia, Greek goddess of health and hygiene, as a figure of life and death was a radical departure from typical representations. The artist was attacked for this representation and for the nudity and excess of his paintings, which were never displayed in the university. However, although the paintings themselves were destroyed, a number of preparatory sketches for Medicine as well as one good black-and-white image survive. 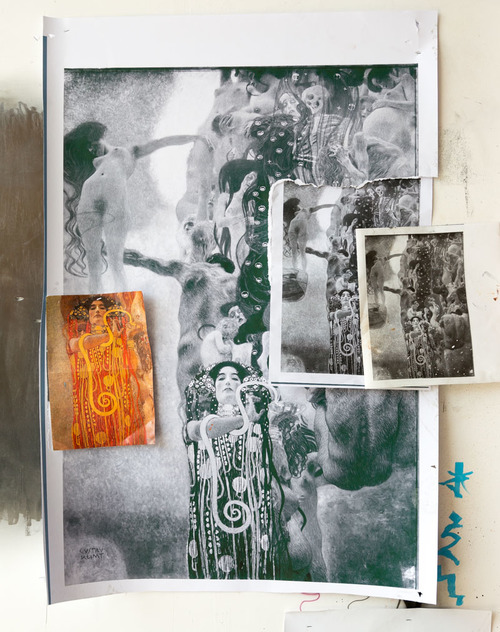 Preparatory work for the recreation

The surviving black-and-white image, printed onto a 430x300cm canvas prepped with gesso, guided the re-creation of the painting. Using this image, it was also possible to reconstruct the depth of tone of the colours in the original painting. To obtain the tones themselves, Klimt’s colour palette was studied together with surviving colour sketches for Medicine. 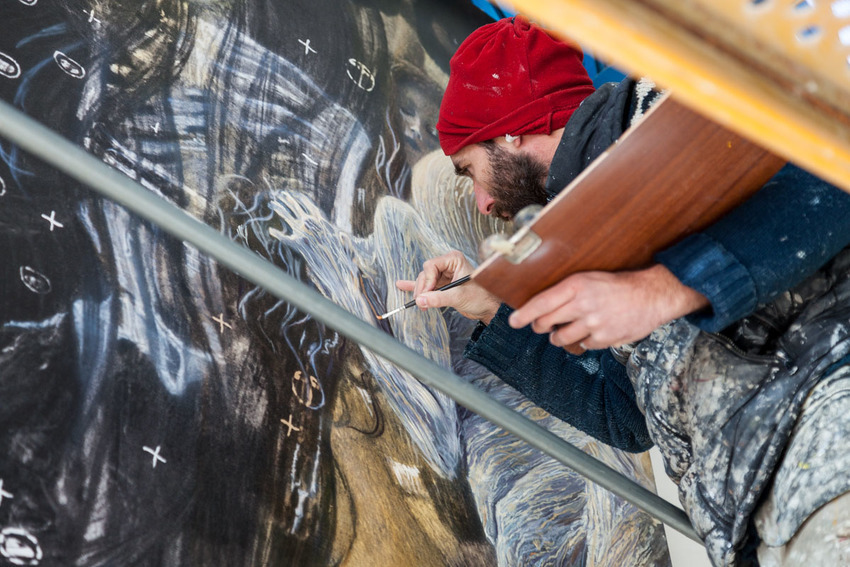 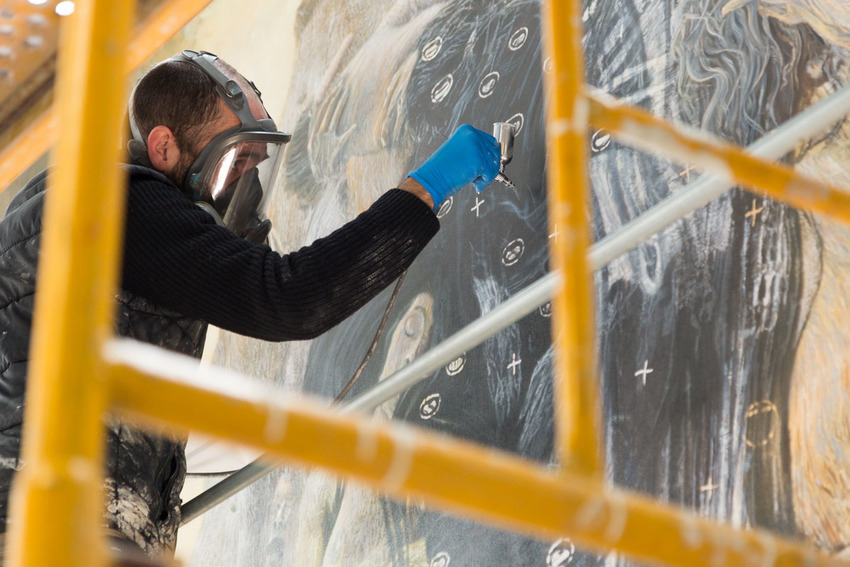 The team at Factum worked outwards from the centre of the painting, building up a first black-and-white preparatory layer with an oil-paint airbrush to cover up the pixelation of the photo. The painting’s vibrant colours were reproduced using both the airbrush and more traditional oil painting techniques. The airbrush was used in areas where transparencies or softer tones were required, as well as to create looser, flowing strokes. The paintbrush was used for details, or where the brushstrokes had to be smaller, such as in the pale background. It was particularly challenging to make sure that the figures did not appear disjointed from their surroundings in the vast canvas and a lot of effort was put into building up shadows and light sources.

Recreating the morphology of Klimt’s brushstrokes

The physical re-creation of Medicine was photographed at high-resolution. In Photoshop, this image was juxtaposed against the surviving black-and-white photograph. Despite the low quality of this second image, Klimt’s confident brushstrokes were clearly visible. In our painted version, the brushstrokes were slightly longer and there were a number of small errors. These were warped in Photoshop to conform more closely to the original. The result is a digital image that has the powerful colours of the now-vanished Klimt painting together with the true morphology of Klimt’s brushstrokes.

Klimt’s signature was clearly visible on the black-and-white image. When the two images – black-and-white together with our recreation – were seen together, Klimt’s signature was found to fit perfectly onto ours. The signature from the ‘original’ was therefore incorporated into the final digital version, making the signature in our final re-creation closely related to Klimt’s original. Then, the colour digital image was printed onto canvas, ready for gilding.

Like many of Klimt’s works, Medicine included gold leaf; originally gilded areas were identified by studying the black-and-white image. These areas were left blank when painting the re-creation. Based once again on clear evidence from the image, paste was applied onto some of these areas in order to give them volume.

Factum’s gilders used a traditional oil-based size gilding technique to apply 22-carat gold leaf. In this process, an oil and solvent-based mixture is applied evenly with a brush onto the surface. The mixture is allowed to set for a number of hours, after which the very thin leaf can be carefully laid onto the surface. Once dry, the gold is polished with a soft cloth.

In the case of Medicine, small details were finished using oil paint over the gold leaf before varnishing the painting. 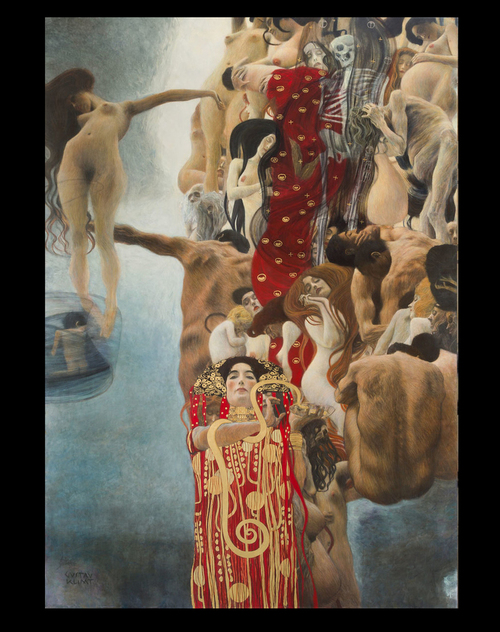 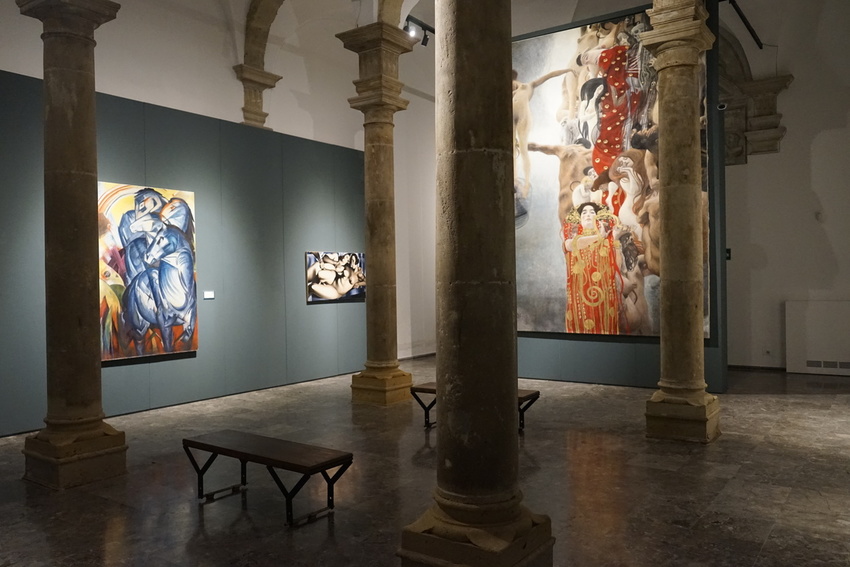 The recreations of Klimt's Medicine on the right, Tamara de Lempicka's Myrto in the background and The Tower of Blue Horses by Franz Marc on the left, on display at Palazzo Abatellis in Palermo, 2019

Probably destroyed in a fire at Schloss Immendorf, Lower Austria, May 8th 1945

In the late 19th century the booming city of Vienna was booming and the Great Hall of the University was one of the grandest buildings on the new ring road or Ringstrasse.

Gustav Klimt was honoured with a commission to produce three giant panels for the ceiling of the Great Hall and he laboured over the project for six years, revolutionising his approach to painting and refining his distinctive, complex and lavish application of gold and other precious metals. The end result should have been a great public triumph, but when he revealed Medicine to the panel of professors, it was met with outrage and banned along with its companion pieces, Philosophy, and Jurisprudence. Some considered the painting pornographic, in particular its taboo depiction of naked pregnant women; others were furious that a work intended to celebrate the achievements of medical science, instead presented a vision of the failure of medicine and the futility of the human condition.

The rejection of the paintings provoked uproar (the matter was even presented to the Austrian Parliament) and an enraged Klimt returned his fee, reclaimed the work and vowed never again to undertake a public commission. For the rest of his career much of his energy went into the glamorous, unmistakeable gilded canvases that today fetch astonishing prices on the international art market. Klimt died aged 55 in 1918, shortly before the Spanish flu epidemic when ‘medicine’ proved impotent in saving the lives of nearly 50 million people.

Although most contemporary artists were labelled ‘degenerate’ by the Nazis, in the 1940s Klimt was championed by the art-loving Nazi governor of Vienna, who helped organise a major retrospective of his work. The exhibition featured 66 Klimt paintings, including the giant canvases of Medicine, Jurisprudence and Philosophy, and during the month that the show was open, 24,000 Viennese flocked to the gallery.

Unfortunately, the Nazi admiration for Klimt proved disastrous for his paintings. At the time of the exhibition the Fuhrer was declaring, ‘total war’, and the threat of allied bombing of Vienna, loomed on the horizon. Medicine, along with other paintings by Klimt, was moved to Schloss Immendorf, a remote castle in Southern Austria, for protection.

On May 7 1945, a retreating SS unit arrived at Immendorf. Germany had surrendered earlier that morning and for these SS men, this was the last night of the war. Apparently Klimt’s paintings, along with many other works of art, were supposedly on view in the apartments and the Nazis, the castle's owner later reported, looked at the paintings with appreciation. One was heard to say that it would be a "sin" for the Russians to get their hands on them. According to a 1946 police report, the SS officers "held orgies all night in the castle apartments", before laying explosives in Immendorf’s four towers, a booby trap for the advancing Red Army. The Schloss exploded into flames when the Russians arrived and continued to burn for several days. It is believed, but was never confirmed, that Medicine and the other University paintings perished in the inferno.