The English neo-romantic artist Graham Sutherland (1903-1980), a painter and designer employed by the War Artists’ Advisory Committee to bear witness to the bomb damage in Wales and London, was commissioned by the House of Commons to paint a portrait of Winston Churchill in 1954. Churchill hated the portrait. A few months after its delivery, it was destroyed on the orders of Lady Churchill. There survive, however, preparatory sketches and oil studies, as well as a number of photographs taken by the famous fashion photographer Elsbeth Juda and one very good image by the photojournalist Larry Burrows. These varied materials were employed by the Factum Arte team in the re-creation of this iconic image. 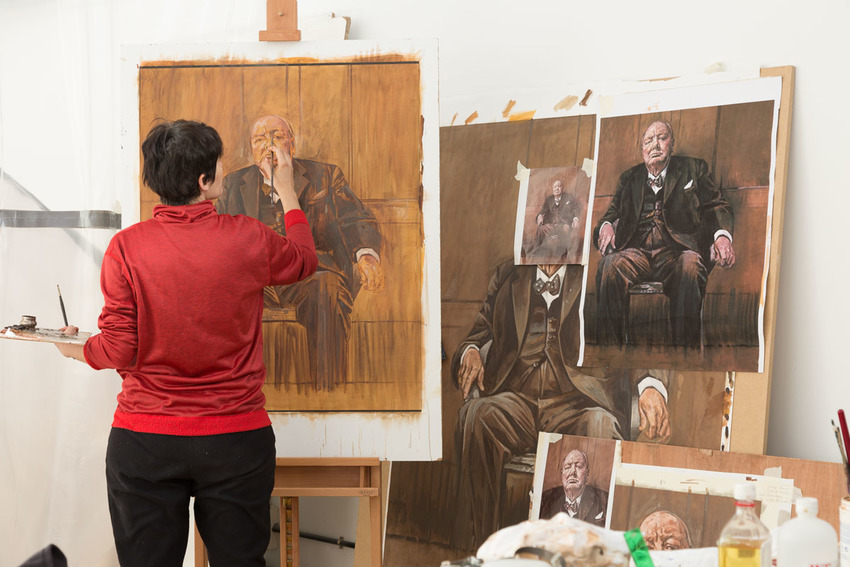 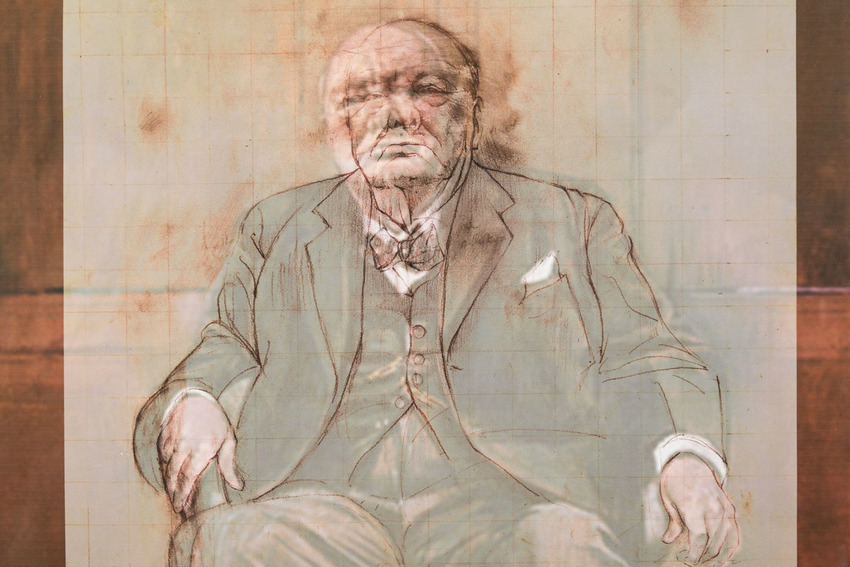 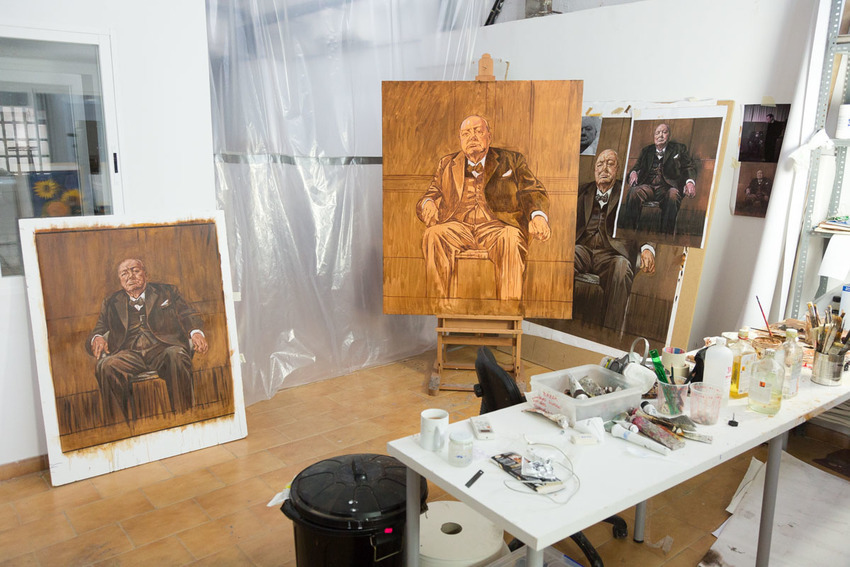 The first steps of the re-creation were carried out using Juda’s images, which were printed onto prepared canvases. The portraitist in charge of the re-creation spent time studying the kind of materials that would have been used by Sutherland: the types of pencils, charcoals, the various brown and ochre oil paints employed by the artist; as well as the psychology of the portrait. However, in the various versions produced, the brown tones were always slightly duller than expected and they did not express the freshness of the original painting. 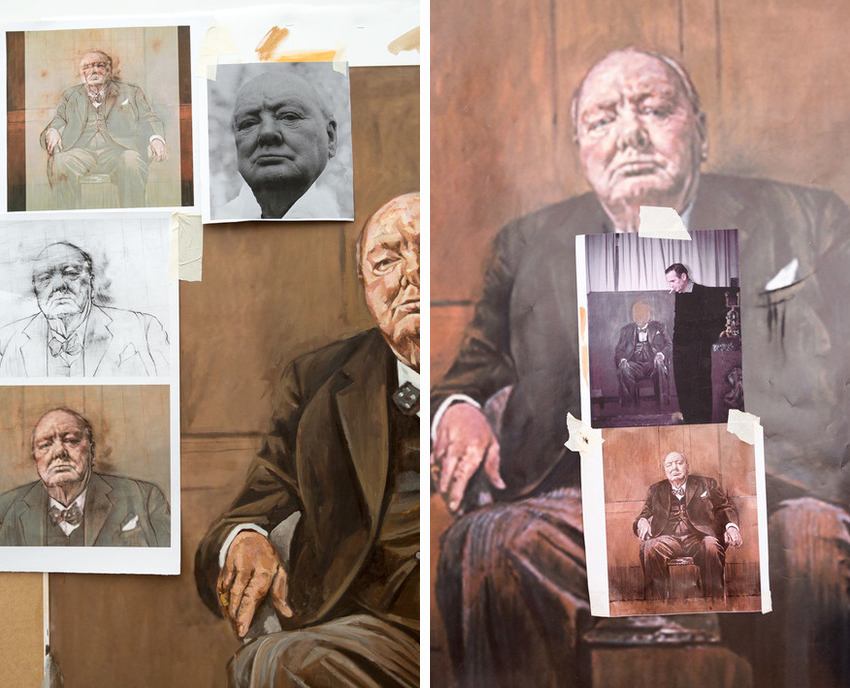 The decision was taken to travel to the National Gallery in London, which keeps a number of the preparatory sketches as well as an oil study produced by Sutherland in the final stages of the work. It was this oil study that proved one of the determining factors in the re-creation. The oils had been painted directly onto an un-primed, raw canvas, making them appear lighter and clearer than if they had been painted onto a white preparation (as had been done up until then at Factum). The team also looked the numerous preparatory sketches for various details; it was clear that Sutherland had carefully studied every aspect of the sitter before very quickly producing a final version of the portrait, another reason to explain its intense vigour.

Whilst in London, the team also visited Churchill’s tailor Henry Poole & Co. on Savile Row. The shop had kept samples of the materials used for the striped trousers worn by Churchill in the painting, as well as information on the cut of the jacket and other details, including the fact that the preparatory sketches had been done while Churchill was wearing what was apparently a 1950s ski-suit. The tailor was also able to provide information on the make of Churchill’s watch, what pocket he usually carried it in… All this was used by the team to better understand the textiles and other features of the portrait. Finally, the team met with the artist Tai-Shan Schirenberg, who studied very much in the tradition of English portrait painting. For Factum’s portrait painter, trained in Spain, it was very useful to better get to know this rich tradition. Schirenberg provided information even on the types of brushes Sutherland would have used; he also pointed out one very interesting feature from an old photograph of Sutherland in front of the portrait. It turned out that Sutherland was using a paint diffuser (not holding a cigarette as originally thought) in order to create the diffuse atmosphere of the painting, another fact that proved very useful in Factum’s ‘re-painting’. 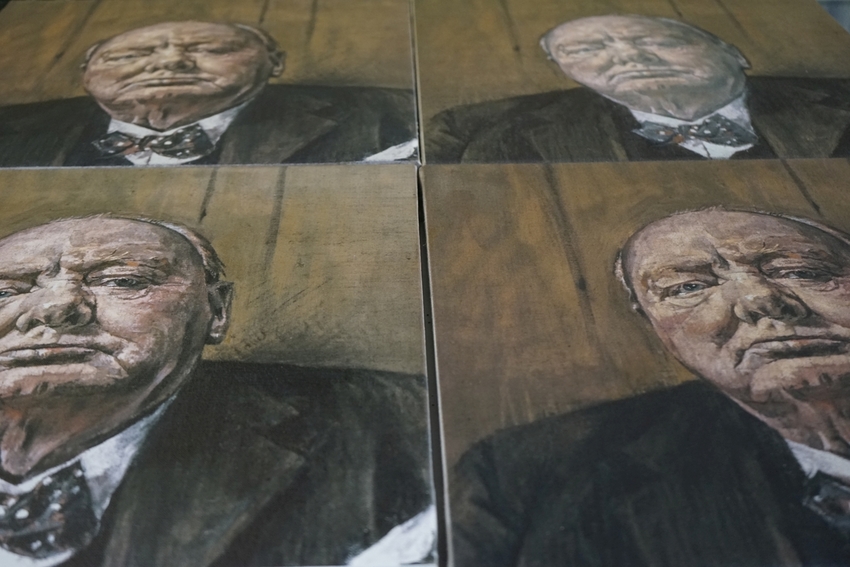 Once the team were back in Madrid, they used this highly-detailed information to guide and inform the re-creation. This time, one of the re-creations done prior to the London visit was printed on raw canvas, immediately making a difference to the brown tones of the portrait. Some further details were added in paint.

Once the final painted version was ready, it was photographed at high-resolution. By now, the team had also found another, better photograph of the portrait. It had been taken by the photographer Larry Burrows, who had used a colour chart in his documentation, thus making the colours obtained very accurate. The image was kindly provided to Factum by the photographer’s son, Russel Burrows.

This image was used alongside the physical reconstruction to produce the final the re-creation. It was used both to correct the tones as well as to provide greater detail in certain areas, making the final re-creation a cross between this excellent image and the energy of real paint. 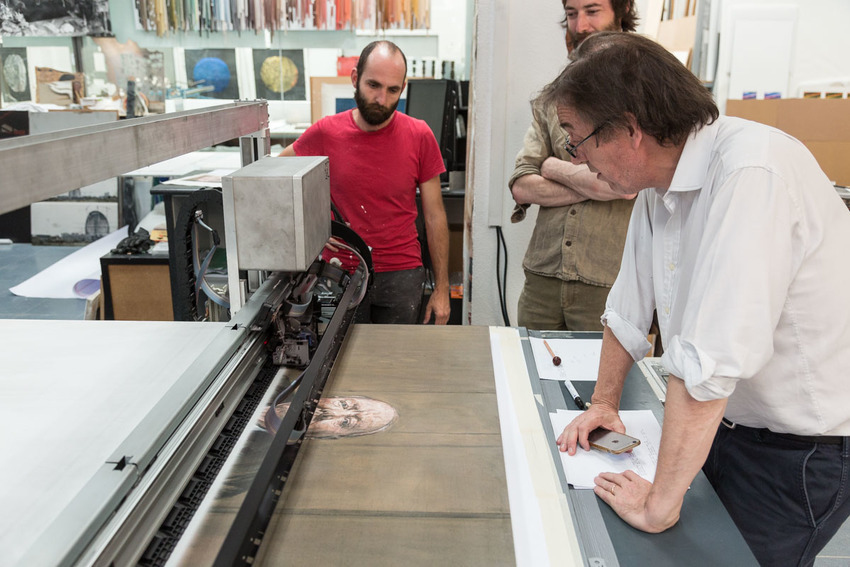 Final stages of the re-creation

The digital file produced in the previous steps was printed onto a canvas only lightly prepped with gesso to keep, again, the feel and texture of the raw fabric. Only in certain areas – the face for example – where Sutherland had used an impasto technique, was the gesso made slightly thicker and more textured to create areas with greater body. 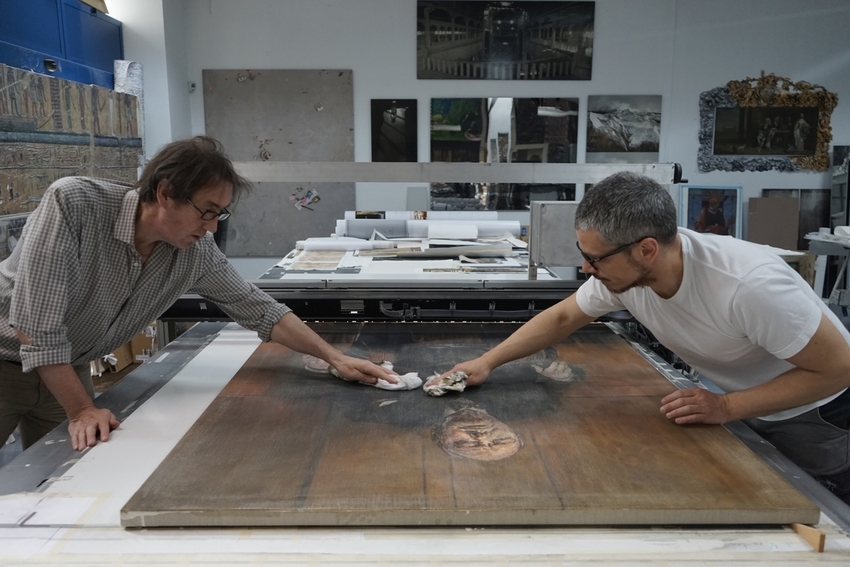 Adam Lowe and Miguel Alves wax the surface of the painting

Although the original painting has been lost, this re-creation of Sutherland’s portrait of Churchill reproduces as faithfully as possible the psychological depth and the life of this fascinating painting. 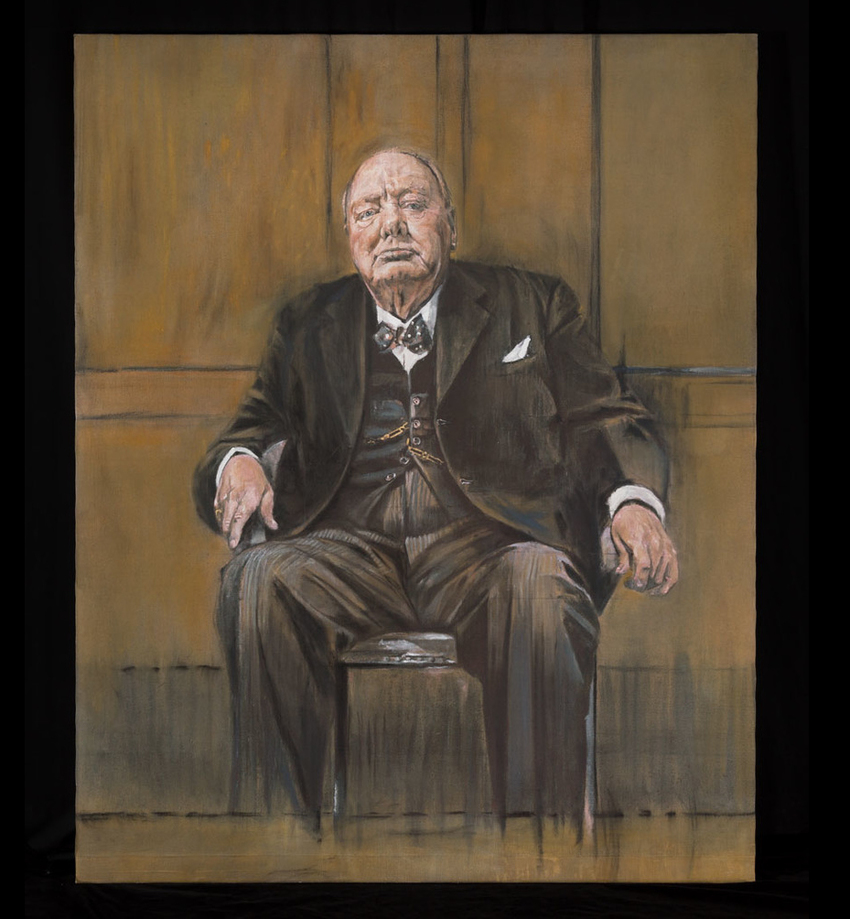