Five Sunflowers in a Vase

Five Sunflowers in a Vase was painted by Vincent van Gogh in Arles in 1888 as part of a second series of four paintings of sunflowers. Although three of this series survive and are amongst the best-loved paintings in the world, Five Sunflowers, which belonged to a Japanese collector, was destroyed following a fire during the American bombing of Ashiya in 1945. A black & white collector’s image existed and a colour photo recently resurfaced; although its quality is not ideal, it nevertheless made evident the striking colours of the original painting. This reconstruction was innovative because, as will become evident from the following summary of the process, it was carried out using only data from other van Gogh paintings.

Van Gogh’s paintings have an extraordinary surface texture, with thick brushstrokes visible even to the naked eye. For the reconstruction, a digital modelling specialist carefully followed a painstaking process of 3D ‘cut-and-paste’ in order to re-create the distinctive character of the surface. 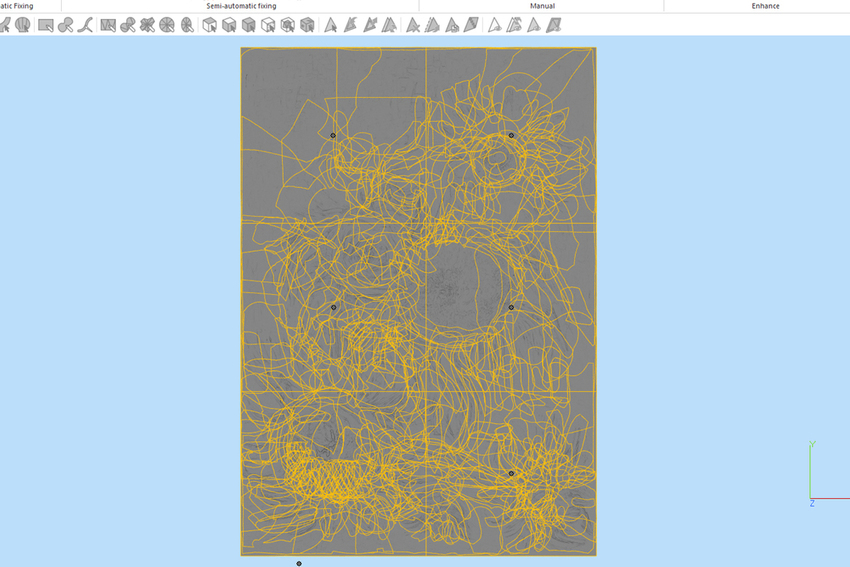 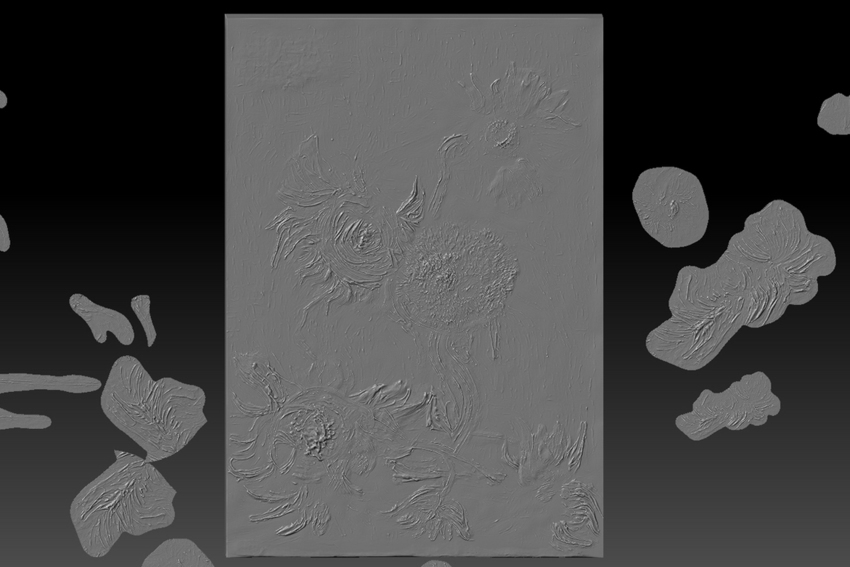 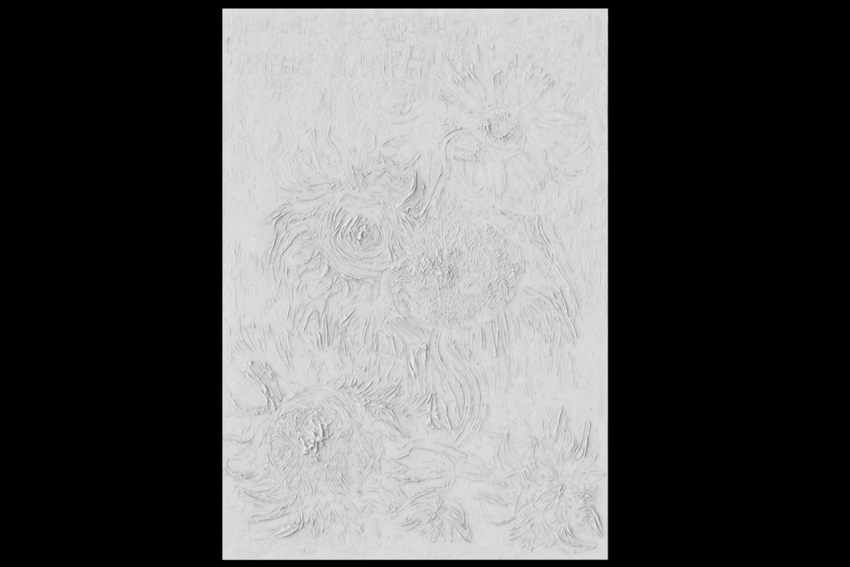 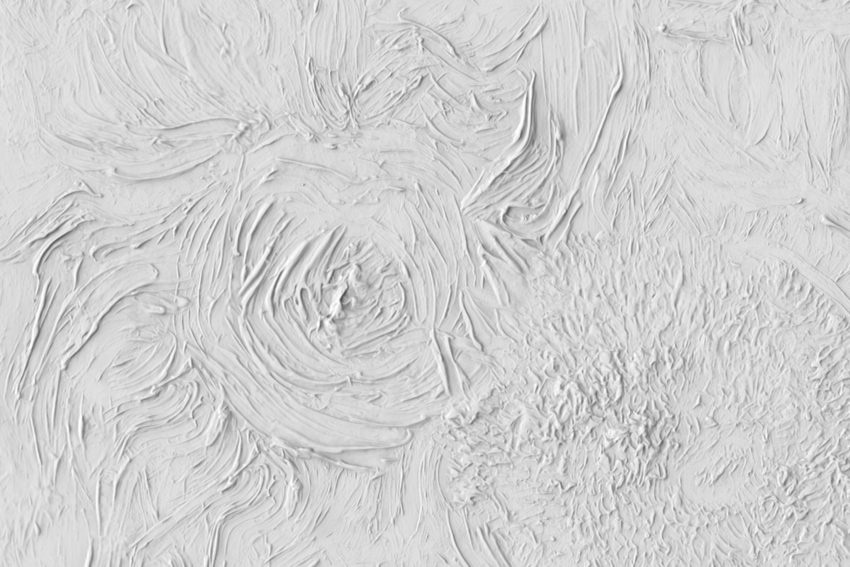 Detail of the 3D reconstruction of the surface

The first step in the digital reconstruction involved physically producing a life-size print of the low-quality image using white acrylic putty as a hard modelling paste and soft modelling paste. This captured the general shape and position of van Gogh’s brushstrokes, although not their morphology. This version of the painting was recorded using Factum’s custom-built Lucida 3D scanner. The Lucida is a laser scanner capable of recording the surface of a low-relief object up to a resolution of 100 microns. In the next stage of the process, van Gogh painting belonging to the same series, Sunflowers (1888), was recorded by the National Gallery in London using their own Lucida scanner; the data was sent to Factum. 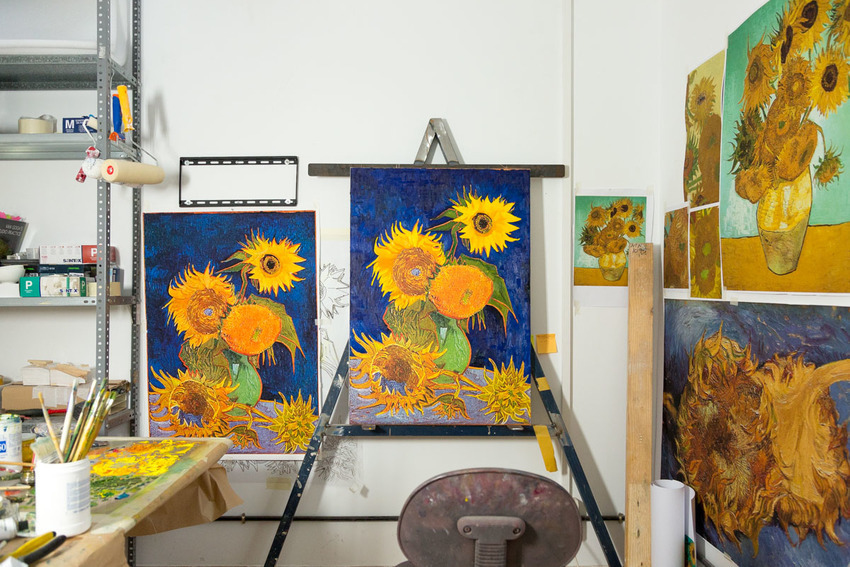 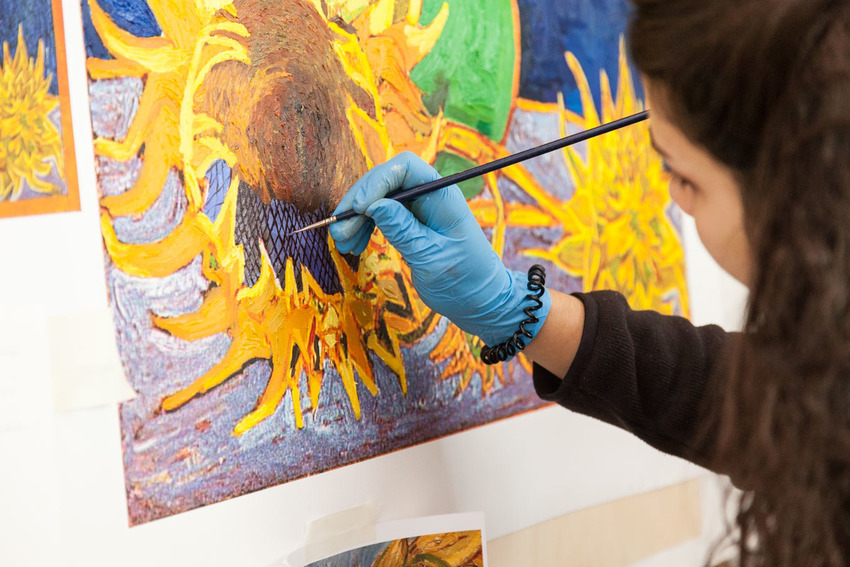 After data processing, the two files were imported into the 3D modelling software ZBrush. The 3D recording of the acrylic version was used as the framework for the reconstruction. Our digital modeller cut out brushstrokes from the 3D file of Sunflowers (1888) and matched them to similar-shaped brushstrokes visible in the acrylic version of Five Sunflowers. Each brushstroke was re-touched as little as possible; in fact, most brushstrokes slid into place with only very slight warping or distortion required. The resulting 3D file was a re-creation of Five Sunflowers in a Vase formed by incorporating brushstrokes made by van Gogh himself. 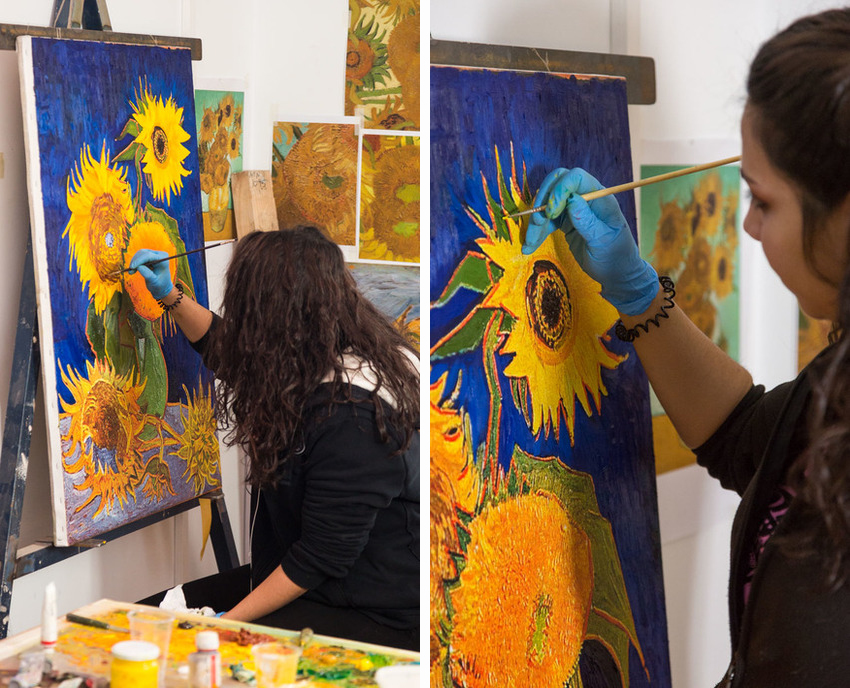 In order to reconstruct the colour, we followed a similar process to that used for the 3D surface. Sunflowers (1888) at the National Gallery was also recorded using panoramic photography, a method of obtaining high-resolution colour by taking multiple images that are then stitched together using specialised software such as PTGui. However, each painting in the 1888 Sunflower series represents a different time of day and has a different tonal range. It was not possible, therefore, to simply lift brushstrokes from Sunflowers (1888) and map them onto the re-creation of Five Sunflowers. In order to solve this problem, research was carried out into van Gogh’s palette; high-resolution images of various Sunflower paintings were studied; and physical colour samples – paper strips that are painted alongside an original object and that show true colour – were taken of van Gogh’s paintings at various museums around the world.Taking the surviving colour image of the work as the main reference, a chromatic range for the re-creation was set.

Then, one of Factum’s photographers began the meticulous reconstruction work of matching brushstrokes found in the high-resolution image of the National Gallery, adjusting it to match the desired chromatic range, and pasting over the low-quality colour image. The final colour re-creation, like the surface reconstruction, was made almost entirely from van Gogh’s brushstrokes.

Bringing colour and 3D together

The re-created texture was 3D printed using OCE’s elevated printing technology and a silicon mould taken from this print. The mould was cast in gesso. The cast was transferred onto a linen canvas to provide a textured surface for colour printing. The colour was printed using Factum’s modified flatbed printers, which allow an exact registration of print and textured canvas.The painting was retouched by hand in specific areas and varnished. Two versions were created, one with a matte varnish, the second with a slightly glossier sheen. 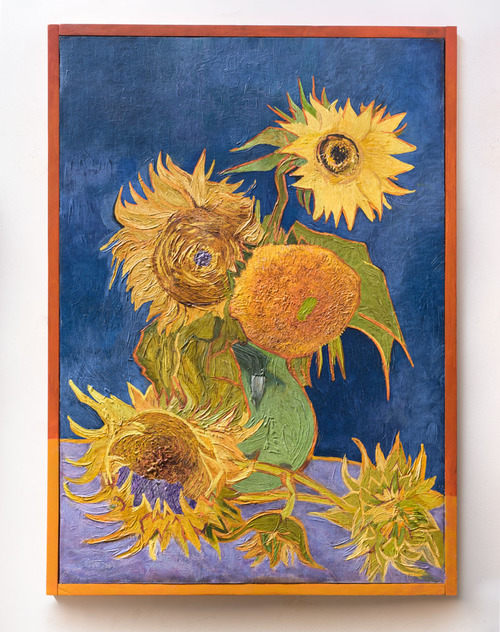 Exhibiting the recreation at Tokyo University of the Arts (2019)

The exhibition ‘Superclone Cultural Properties’ (Sep. 16 –29 2019) at the Tokyo University of the Arts Museum introduced concepts and material realities surrounding the reproduction of cultural heritage. The University of the Arts is currently deeply engaged in research and development relating to cultural heritage protection and the creation of faithful reproductions of cultural assets from around the world.

A section of the exhibition was dedicated to the complex process of recreating Five Sunflowers in a Vase. 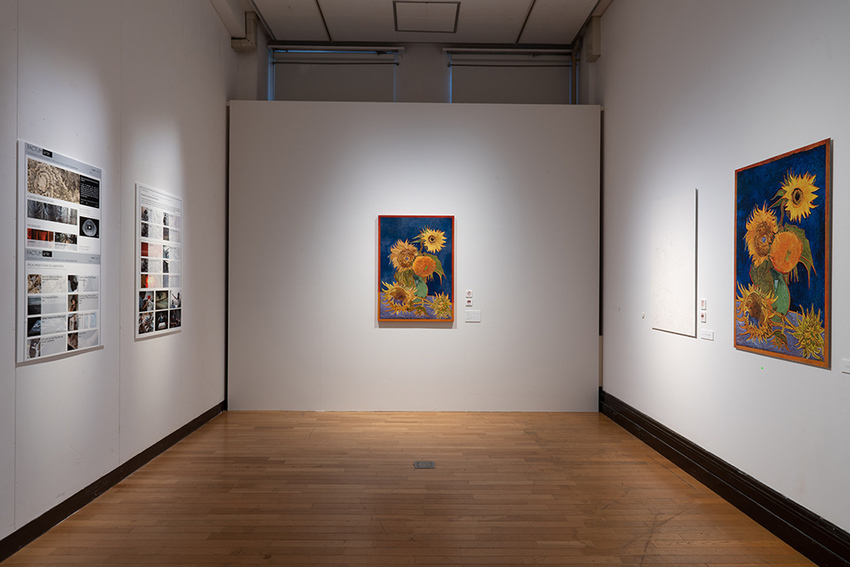 The recreation on show in Tokyo. The two prints on the right show how 3D and colour are merged to produce a facsimile © Tokyo University of the Arts 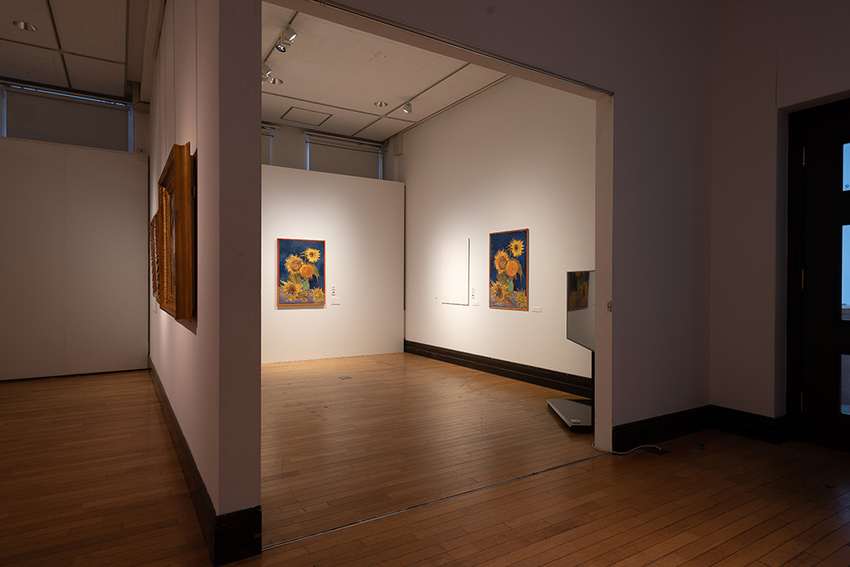 © Tokyo University of the Arts 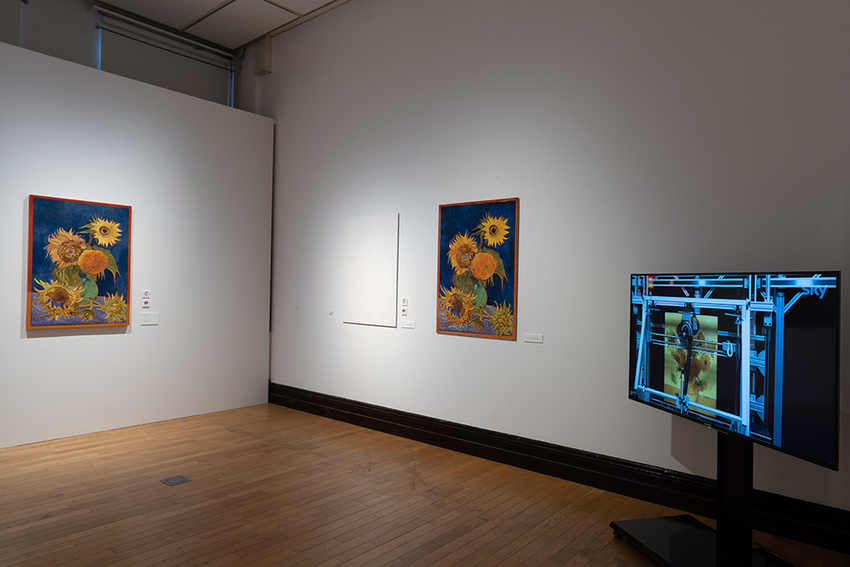 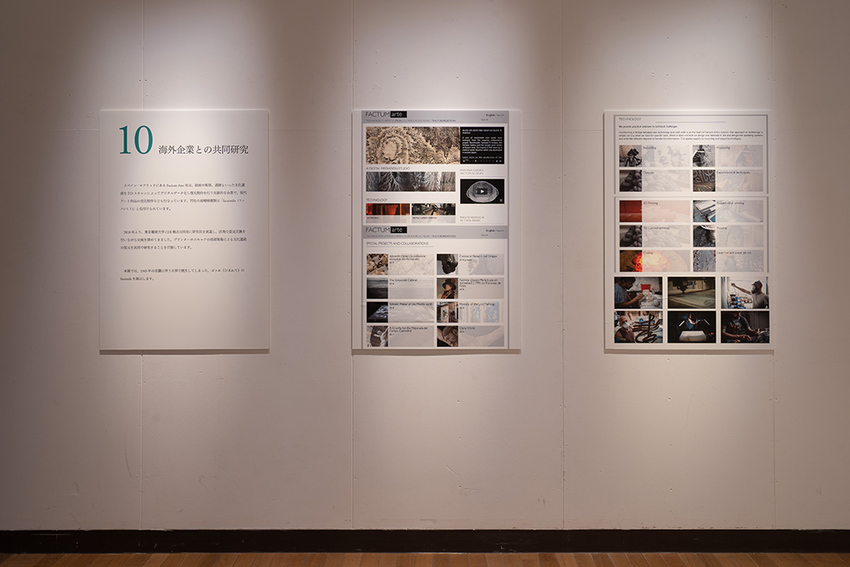 In the spring of 1888 Vincent van Gogh left Paris in search of a new world and fresh inspiration, he took a train to Arles where he rented a small yellow house. His time in in the town is best known for its ending, his breakdown and self-mutilation, but Van Gogh’s psychological crisis was preceded by a period of immense excitement and astounding creativity.

Oh, the beautiful sun down here in high summer; it beats down on one’s head and I have no doubt at all that it drives people crazy. Being that way already, all I do is enjoy it.

Van Gogh was intoxicated by the sunlit colours and Provencal landscape and spent everyday painting out in the fields. At the same time his painting was profoundly influenced by the Japanese prints or ukiyo-e that had recently found their way to France and he nursed a fantasy of journeying to a serene magical oriental landscape. When he arrived in Arles he wrote ecstatically to his brother ‘I feel like I am in Japan’.

But in the beginning of August 1888 the mistral wind was blowing so hard that Van Gogh was forced to paint indoors. He took the opportunity to paint still-lifes of his favourite flowers. In the space of just a week he produced a series of four sunflower paintings and the following winter he added three more to the series. When the artist Paul Gauguin came to stay in Arles Vincent decorated the guest room with sunflower paintings hoping to impress and Gauguin reciprocated by painting a portrait of his host titled, The painter of Sunflowers. These radiant, vivid three-dimensional flowers, infused with the spirit of ukiyo-e were precious to Van Gogh while he lived and when he died they were among the first paintings to sell, as his work and genius finally began to be recognised.

In 1920, thirty years after Van Gogh had killed himself, the second of the sunflower paintings from Arles, Five Sunflowers, arrived in Japan. It had been bought by a wealthy Japanese cotton trader, Koyata Yamamoto, who lived in the southern town of Ashiya. Yamamoto had originally intended to display the work in public but after it fell off the wall in an exhibition, damaging its rather heavy and ornate gold frame he decided to keep it at home and it was carefully secured to the wall above the sofa in his sitting room. Yamamoto was infatuated with the picture and in 1943 he published a collection of his own haiku poems in a volume entitled ‘Sunflowers’.

August 6th 1945, the same day that an atomic bomb wiped out the city of Hiroshima, a vast armada of B29 bombers firebombed large urban areas between Kobe and Osaka, including Ashiya. Yamamoto’s family managed to escape but his house was completely destroyed along with Five Sunflowers.