The Concert by Johannes Vermeer was stolen from the Isabella Stuart Gardner Museum (Boston) in 1990. The painting was well-documented and there exist many scholarly studies on Vermeer, his methods, and his time. Information from various sources was collected as a means to inform the re-creation and the team at Factum Arte used both traditional methods and the latest digital technologies in their approach. 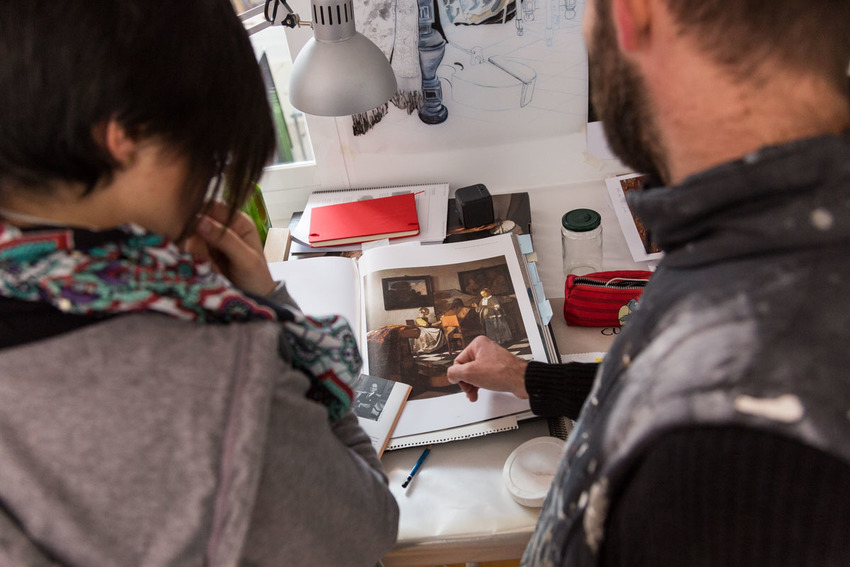 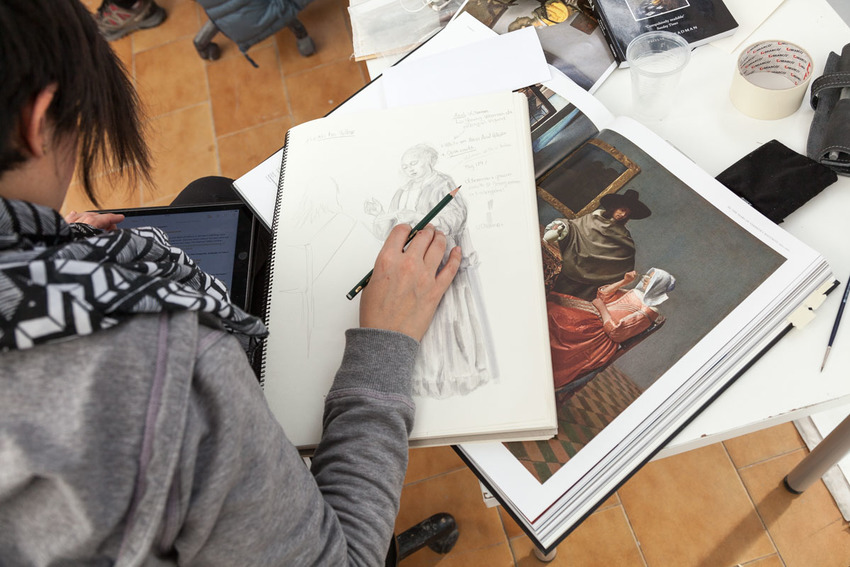 The first step in the process to recreate The Concert used the best image available of the lost painting as a guide for Factum’s artists. The image was enlarged to real-size and digitally printed on canvas prepped with gesso. It is thought that Vermeer’s underpaintings were commonly done in grisaille – grey monochrome – to which he later added colour. By printing the guide image in greyscale and sepia, it functioned as a true underpainting may have done, and gave better results in the attempt to capture Vermeer’s tones as closely as possible.

Three artists worked on their own re-creations of the painting, which would later be combined using digital methods. The physical re-creations were invaluable to the process, giving the final printed object the feel and semblance of a real painting. 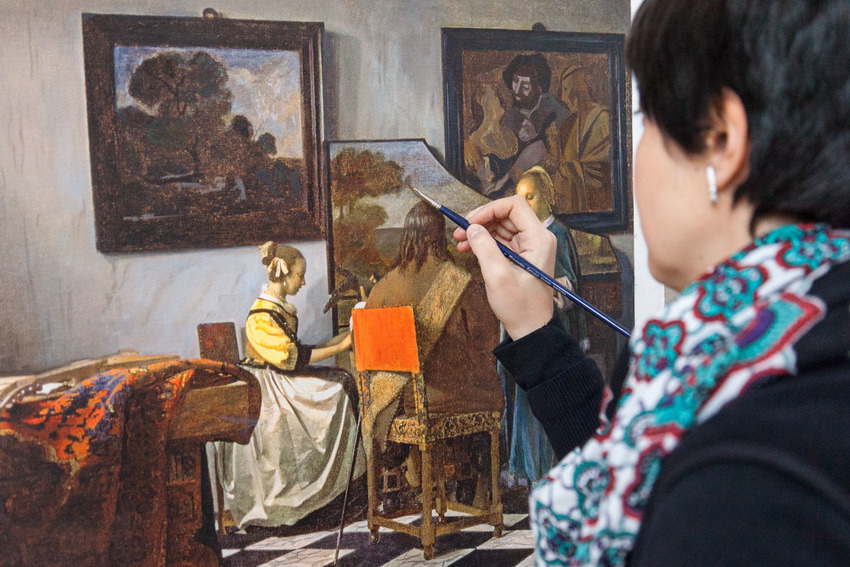 Silvia Alvarez paints one of the many versions of this work 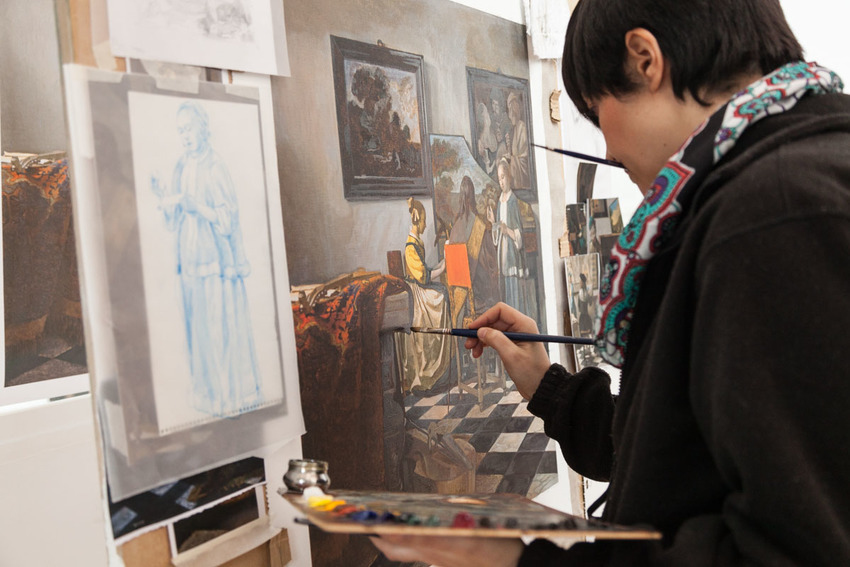 Experts believe that Vermeer may have used a camera obscura, a pinhole camera that projects a reversed image of a scene onto a surface, to assist in the creation of his paintings. At Factum, a camera obscura was constructed to better understand how this technique may have worked and its influence on the painter. Research was also carried out in order to recreate Vermeer’s limited palette as faithfully as possible, looking at pigment analyses and studies on the materials bought by his studio. 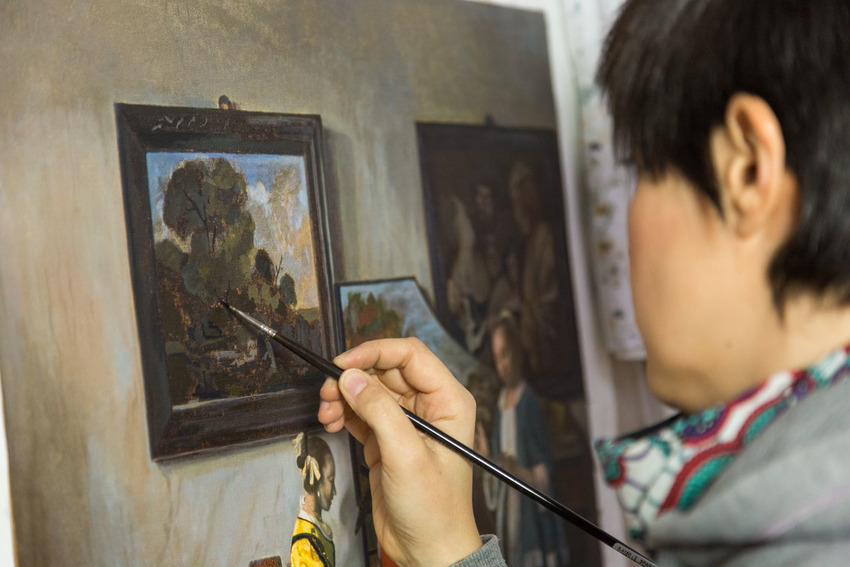 Silvia Alvarez prepares one of the various versions of this work.

Moreover, so as to better re-create the poor conservation state of the original in 1990, the colours were chosen in order to better represent the slightly yellowed, muted tones. In the versions used for the final re-construction, Factum employed only the highest-quality oils, including now-rare and expensive pigments such as lapis lazuli. 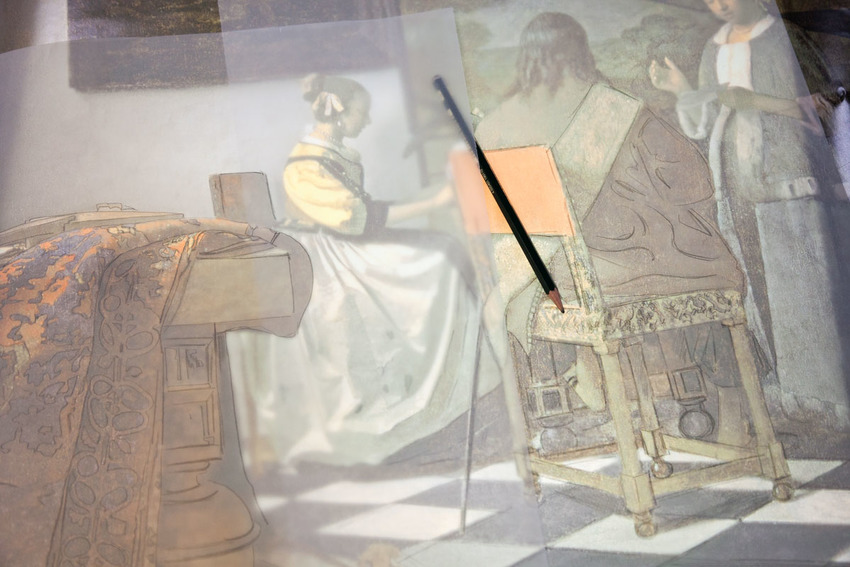 The artists working on the re-creations each brought something different to the painting, but all agree that Vermeer’s most important qualities lie in the way he represents light and in his ordered scenes. By focussing on these aspects of the painting and trying to mimic the light as closely as possible, they achieved an important degree of fidelity to the original.

Apart from photographs of the original painting, Factum’s team were also able to study high-resolution 3D and colour data from a Vermeer painting belonging to the Royal Collection. Alongside advice from the Vermeer expert Jonathan Jason, this proved useful when thinking about Vermeer’s general style and technique.

Digital reconstruction was used to fuse the different painted versions and to achieve a level of detail impossible in the physical world. Each version of The Concert painted at Factum was photographed at high-resolution. In Photoshop, the best sections from each painting were combined to create a final version. The most delicate areas, including the faces and hands of the figures standing around the instrument, were taken from a photograph of the original.

The surface of the original painting would have been textured with a delicate paint craquelure. In order to achieve this effect in our re-creation, the craquelure from the Royal Collection Vermeer was used to texture the Photoshop image of The Concert. Other details, such as the character of the floor, where each of the marble slabs is intricately lined and coloured, were also digitally reproduced based on other Vermeer paintings.

The 3D data from the Vermeer at the Royal Collection was modified; the scale was also reduced. The 3D model was printed using OCE’s elevated printing technology and a silicon mould taken from this print. The mould was cast in gesso. The cast was transferred onto a linen canvas to provide a textured surface for colour printing. The colour was printed using Factum’s modified flatbed printers, which allow a very exact registration of the print and the canvas. The final step in the re-creation of The Concert was applying a coat of varnish to this textured print. 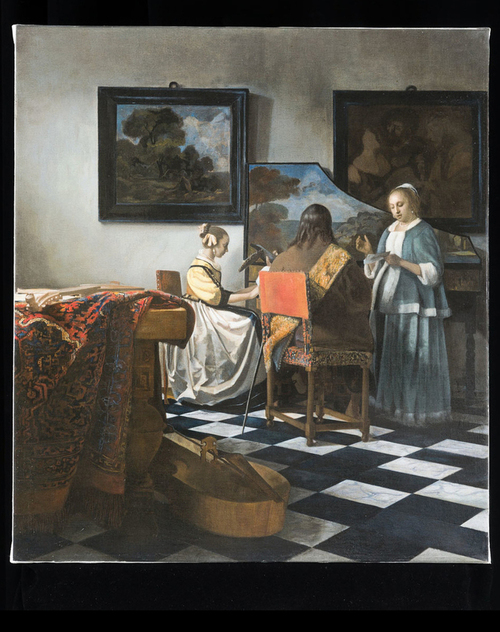 The final reconstruction of Vermeer's masterpiece.

Jan Vermeer was a minor figure in the mid-seventeenth century Dutch art scene who fell into obscurity after his death, and yet today the thirty or so of his paintings which survive are among the most popular and valued in the world. There are plenty of explanations for this dramatic resurrection, but central to the modern fascination with Vermeer is the mystery surrounding both him and his work.

Who was he? We know almost nothing about his life.

What’s happening in his pictures? What should we make of the enigmatic human dramas he portrays? And what were the secrets of his unique technical ability, how does he come so close to creating reality on his canvases?

The Concert, painted in the middle of Vermeer’s career between 1663 & 1666, looks like a simple scene of amateur music making, but, like so much of his work, there are plenty of unanswered questions. Who are these people and what is their relationship? On the right hand side of the back wall there is a painting within the painting which also depicts two women and a man. It’s called The Procuress by Dirck Van Baburen (c. 1622), it still exists today and it shows an old woman taking money for providing a prostitute. Is Vermeer presenting us with an image of domestic harmony, or the scene of a seduction?

And how did Vermeer achieve the textures, the detail and the uncanny sense of perspective? Increasingly art historians believe that Vermeer was using revolutionary new technology, an early form of camera obscura, a pin hole device that would have allowed him to project the image of the models posing in his studio directly onto a drawing surface. It’s a theory encouraged by the knowledge that one of his near neighbours in Delft was the great pioneer of lens technology, Antonie van Leeuwenhoek.

Of course the greatest mystery surrounding The Concert is its location today. In 1990, late on the night of Boston’s St Patrick’s Day celebrations, two men dressed as cops tricked their way into the Isabella Gardner Museum. They bound and gagged the night security guards before selecting 13 pictures and objects including 3 Rembrandts, several Degas’ a Manet and this Vermeer. Each canvas was roughly cut from the frame with a knife. None of these artworks have ever been recovered and today the haul is valued at around $500 million. There are countless theories, was it just some local hoodlums, or was it a contract job for a big mob boss. For a while it was believed that the pictures were in Ireland in the hands of the IRA, detectives have followed leads all over the globe and even today FBI investigations are ongoing.

Many believe that The Concert and the other works still exist, hidden in a damp cellar or maybe locked away in a private bank vault, but thirty years down the line the fear is that the secret of their whereabouts may soon disappear into the grave along with the thief who stole them.